ON A WING AND A PRAYER? (some text hidden)

The Ford Escort Cosworth seems to have entered popular folklore as the car that, for a while at least, killed the hot hatch. Here was a car so quick, so capable and yet so desirable to ne'er-do-wells that the insurance industry threw a hissy fit, made it all but uninsurable and applied the same policy to anything with a GTi badge on it. Whilst history may record a black mark against the Escort Cosworth, anybody who ever drove it could almost understand frustrated young men wanting to get behind the wheel at any cost. It was that good. Even by today's standards it more than shapes up, making tracking down a decent used example a fascinating experience.

The Escort RS Cosworth was born from a desire within Ford to develop a more compact version of the Sierra Cosworth to homologate in order to go rallying. That it proved to be a hugely successful road car came as something of a pleasant surprise to Ford. Built on a truncated version of the Sierra Cosworth chassis, the RS Cosworth was quite unlike other Escorts. With its 2.0-litre turbocharged longitudinally-mounted engine driving all four wheels it was effectively a sawn-off Sierra with faux Escort panelling and a rear wing that made that sported by the original Sierra RS Cosworth appear almost understated. Designed at Boreham and assembled by Karmann in Germany, this was a big budget undertaking. Two models were available, a standard car priced upon introduction at £21,380 or a Lux version with electric windows, heated screen, sunroof, Recaro seats and rear headrests. With 227bhp at its disposal, the Escort was far from backwards about coming forwards, but purists bemoaned its turbo lag. Ford soon sold the 2500 cars it needed to facilitate its entry into rallying and then set about improving the Escort RS Cosworth as a road car. The 'big' Garrett T3 turbocharger was replaced by the smaller T25 unit in May 1994, giving the car a more measured throttle response. The Escort was at the same time decimating rivals in rallying, winning the 1994 Monte Carlo rally in the hands of Francois Delecour, while Tommi Makinen claimed that season's Thousand Lakes in his native Finland. A limited edition Monte Carlo version was subsequently launched. A mild facelift was visited upon the RS Cosworth in 1995, with a wider honeycomb grille, restyled bumpers, a more attractive fascia and revised alloy wheels amongst the revisions. The car carried on in this form until it was finally discontinued in January 1996 due to ever-tightening Euro emissions regulations.

What You Getword count: 14

An icon. That and a supremely practical hatchback to go with the loud suit. 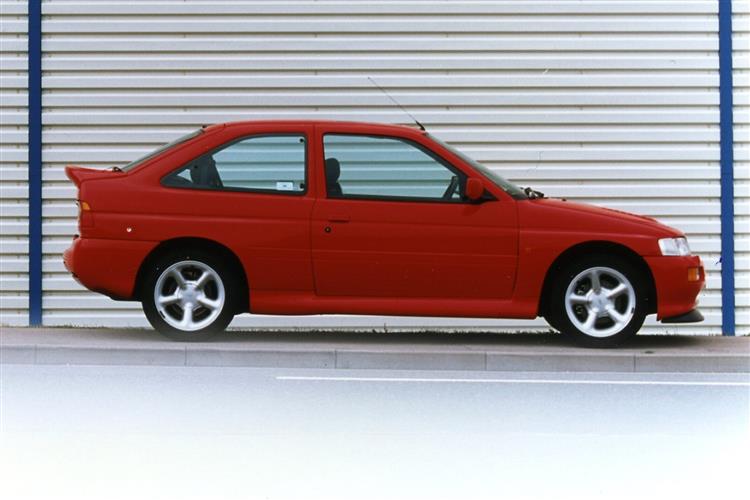