ESTATE OF GRACE (some text hidden)

Although Volkswagen initially launched the fifth generation Passat Estate back in 1997, the revised 2000 model year car has proved to be a favourite amongst used buyers and it's well worth seeking out. With ever more sophisticated electronics, smoothed over styling and a range of excellent powerplants, this Version 5.5 Passat load lugger is justly popular. Whilst not the most exciting estate you can buy, the Passat is nevertheless a mature, capable and assured proposition.

Volkswagen had long offered an estate version of the Passat before the advent of the version featured here and in several markets it outsold its saloon counterpart. The model we're concerned with dates from late 2000 when the fifth generation car was given a wash and brush up. Although many figured the changes extended to a few splashes of chrome on the grille and some clear light lenses, the improvements actually went a lot further. There were subtle interior tweaks, beefed up suspension and chassis and a new range of engines. In all, seven engine choices were available, four petrols and three diesels. Of the petrols there was a 115bhp 2.0-litre, 150bhp 1.8-litre turbo, the new 170bhp 2.3-litre V5 and a range-topping 193bhp 2.8-litre V6, fitted as standard with four-wheel drive. The diesel engines included the uprated100bhp 1.9-litre turbo diesel, a new 130bhp Pump-Duse turbo diesel unit and the flagship 150bhp 2.5-litre V6 diesel. Summer 2002 saw the addition of the luxury W8 eight cylinder variants at one end of the Passat scale and the fitment of a 16-valve cylinder head to the 2.0-litre model, raising power from 115 to 130bhp. The 130bhp PD diesel variant was also made available with a 4MOTION all-wheel drive transmission. Prices were cut amongst the top range models in early 2003 and the lower end variants got a significant equipment boost as well as a little more chrome finishing. Late 2003 saw another small revision with the addition of Phaeton-style wing mirrors that incorporated indicator units and the addition of the Highline trim level. A Trendline value model was introduced in July 2004.

Such is the quality of the Passat that many buyers turn up at the showroom already convinced as to the car's perceived merits. Some don't even bother with a test drive - which was useful with the original post-'97 car since it wasn't that great around the twisty stuff. The 2000 generation Passat is a different proposition altogether. As already suggested, standard equipment levels disprove the old myth about German cars being as lavishly appointed as a squash court. In addition to the recent specification tweaks, all models as a matter of course get ABS, climate controlled air-conditioning, an alarm/immobiliser and remote central locking. All cars also come fitted as standard with front, side and curtain airbags, plus Brake Assist and a third rear seatbelt. Although the standard Passats are now pretty well stuffed with equipment, the range topping W8 has moved things into a different league. Sitting inside the Passat W8 it's not hard to see where, engine aside, your money goes. We're used to Passat interiors and this is little different, albeit with the sum content of Volkswagen's lengthy options list being levered into it. Suddenly, being softened up looks an attractive option. Leather, wood and aluminium all make an appearance and even the most exigent button jabber could keep themselves amused for hours inside. There are some Kingston sound systems with less wattage than the standard fit stereo. The Estate offers some 56.5 cubic feet of total load capacity - not the largest in its class but quite sufficient for most. The carpet that covers the load bay is as hardwearing as it is plush, while clever load-lashing points stop your luggage rolling around. Volkswagen even provide two handles inside the tailgate to prevent your hands having to get dirty when closing it, whatever side of the car you're on. Volkswagen have managed to make small incremental changes to the Passat whilst keeping faith with the overall look and feel of the car launched in 1997. This ensures that residual values of early cars are not wiped out. With a design as fresh looking as the Passat, that's fortunately not too hard a job. 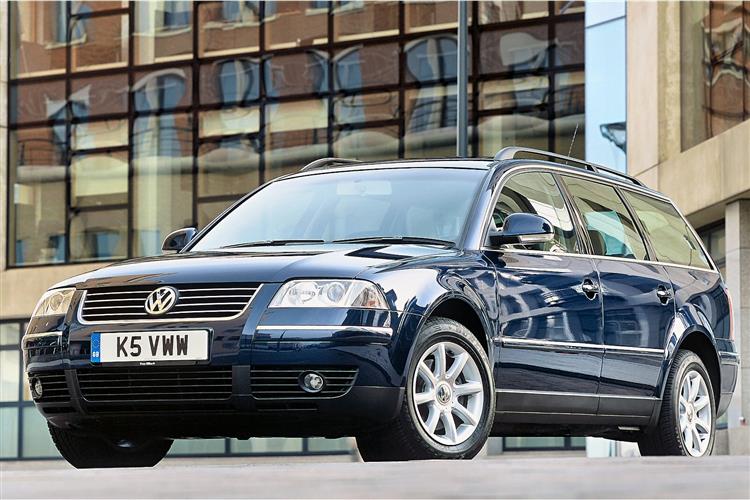