Of the four Japanese super-coupes introduced at the start of the nineties, the Nissan 300ZX enjoyed the most success in the UK. The Mazda RX-7 was a bit too uncompromising, the Toyota Supra twin-turbo extrovert and the Mitsubishi 3000GT expensive and rather dull. The 300ZX, with its aggressive looks and competitive pricing, was a success from day one, and paved the way for newer and more expensive Nissan models such as the Skyline GT-R. Despite only being on sale for four years, the 300ZX achieved a remarkable feat. It made paying big money for a Nissan seem a reasonable course of action, something which had never previously been the case. To be able to change perceptions in this manner requires a seriously credible car. The 300ZX's credibility was unquestioned. It was hailed as a return to the proper 'Z' car philosophy of the seventies, when Nissan Z models were lightweight, Porsche-baiting sports cars, but that may have been pushing things too far. Nevertheless, expectations were low after its frankly awful pair of predecessors, but the big Nissan confounded most cynics. As a used buy it's possible to get a great car, but watch out for rogues. There are no shortage of 'nails' out there that you'll want to avoid.

The Nissan 280ZX and 300Z models that preceded the 'Series Z32' 300ZXs were as poor a pair of big sports coupes as you could care to imagine. Overweight, dull, with chintzy interiors and cheesy medallion-man images, these cars thankfully live on only in the £150 Spares or Repair section of the small ads. It's easy to note that the 300ZX didn't have much of a task eclipsing these duffers, but the competition had raised the bar considerably during the development cycle of the 300ZX and it needed to be good. When the car was launched in 1990, the market contained some excellent sports models such as the Porsche 944 S2, Audi Quattro 20v and the Ford Sierra Cosworth 4x4. The Nissan scored straight away with its styling, which looked butch and muscular without crossing into crass caricature. The 300ZX changed little during its existence and the choices available were straightforward. All models were equipped with a Targa roof panel, and were available in either manual or automatic guise. In January 1992 Nissan (GB) came into existence and slightly changed the way the car was marketed. Instead of being offered as a manual car with an automatic option, Nissan switched it around. An optional luxury pack was also offered which included leather trim and CD player. The 300ZX then went unchanged until its premature demise in 1994, killed off by emissions regulations. For those who looked forward to a replacement Z-car, there would be a long wait.

The 300ZX is a sports coupe for all seasons. Some find the aggressive 'bottom-feeder' looks slightly odd, but they have dated well. It handles beautifully for a large car, is super-quick in a straight line and is relatively spacious for the driver and passenger. All UK models were 2+2s, although the rear seat space is predictably laughable, designed for those unseen folk with legs less than two inches in diameter. The twin-turbocharged engine is a muscly, if somewhat characterless unit, but the whole package gels very well. The 'T-bar' targa roof is easy to remove, but is quite heavy, coming apart in two pieces and leaving a strengthening spar behind. Equipment levels are reasonably good, with air conditioning, anti-lock brakes, central locking, cruise control, electric windows and mirrors and the option of electrically adjustable leather seats. 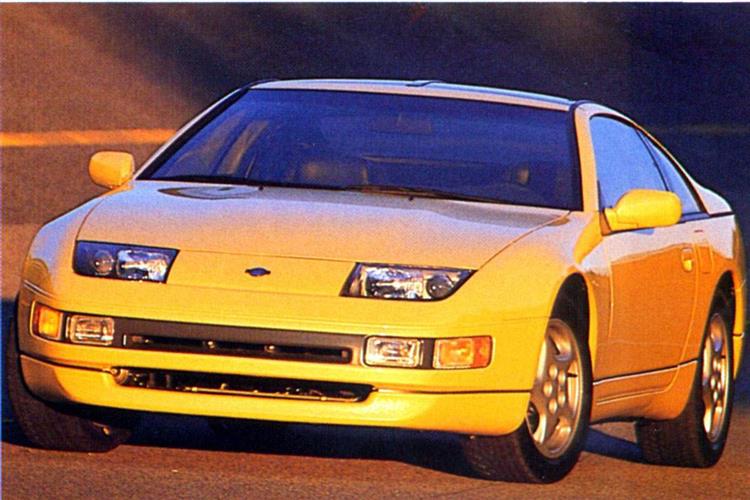