NIP AND TUCK (some text hidden)

Some facelifts work better than others. You've only got to look at the state of Michael Jackson's nose to figure that one out. The same goes for cars too. There are hits, misses and maybes. Into the latter category we can probably put Fiat's facelifted MK2 Punto, launched in 2003. The sharp styling of its predecessor was rounded off but there were a whole host of other changes that were far more agreeable. Buying a used Fiat isn't the gamble it used to be and the MK2 Punto has gained a reputation as one of the better built superminis, an impression the post-2003 cars bolstered.

Although this model is fundamentally the same as the Punto launched in early 2000, there are some noteworthy changes worth mentioning. A facelift, new Multijet diesel engines and new trim levels were brought in to improve the Punto's standing. Models from this period onward are branded Active Plus, Active Sport, Dynamic, Eleganza, Sporting and HGT. A special edition Punto 'Xbox' was launched in 2005 to coincide with the launch of the Forza driving game for the Microsoft Xbox console. This and another special 'Sole' version helped keep sales reasonable but when the longer wheelbase Grande Punto was announced in early 2006, it was clear that this Punto's days were numbered. The range was cut back for the run-out with only 1.2-litre engined models available.

Most will notice the larger clear-lensed headlamps, the three-part under-bumper grille that received mixed reviews and the rather neater treatment to the rear end. Of more consequence are a trio of engines that merit closer investigation. First up is a 95bhp 16-valve 1.4-litre petrol powerplant offered with the Sporting model that plugged the yawning gap between the 80bhp and 130bhp petrol engines existing in the original post-2000 Punto line-up. Of more interest to British motorists were the 'Multijet' diesel engines of either 70bhp or 100bhp output. It's worth remembering at this point that it was Fiat who popularised the notion of common-rail diesel engines and here, the concept was taken a step further. Whereas conventional Fiat common-rail diesel engines fire two squirts of fuel into the combustion chamber for each cycle of the cylinder - a small 'pilot' shot followed by the full injection of fuel - Multijet adopts an altogether more sophisticated approach. Depending on variables such as engine temperature and throttle opening, Multijet can fire anything up to five injections per cycle. The amount of fuel entering the engine doesn't exceed first generation common-rail, but it can be tailored to burn more efficiently which in turn purports to decrease noise, vibration, carbon dioxide emissions and overall fuel economy. Impressive stuff. The interior benefits from Fiat's post-2003 drive to endow the Punto with a more upmarket look and feel. Two tone dashboards give the car an airier feel than its predecessor and dual-zone climate control will be fitted to many cars you'll find. A fascinating piece of electronics is the Connect OBN system, an optional off-board navigation system. Rather than rely on the more usual CD-ROM of information that invariably fails to mention a newly-built motorway or terminates as you cross a national border, Connect OBN instead uses information stored centrally. Users pay a nominal fee every time they download a route and it keeps costs down. 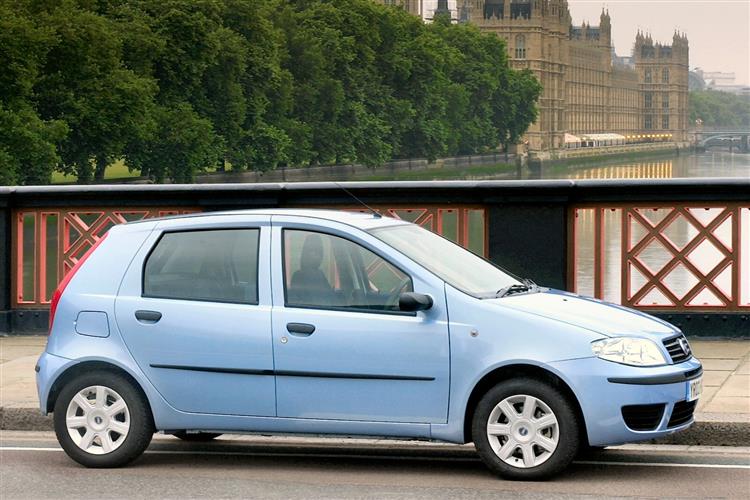