BACK FROM THE ZED (some text hidden)

Ever since the introduction of the 240Z in 1970, Nissan - and formerly Datsun - 'Zed Cars' have been the company's sports coupe staple. There have been great cars, like the 240Z, very good cars like the 260Z and the 300ZX and some howlers such as the 280ZX and 300Z. The 350Z deserves pride of place alongside the original 240Z. A focused sports coupe rather than a bloated boulevardier, the 350Z is a car for the keen driver who will appreciate a muscular look and feel. Used examples are now appearing in reasonable numbers and a well looked after 350Z makes a great buy.

We knew the 350Z was going to look a little special when Ajay Panchal's sketches were first released to the press, but initial enthusiasm was perhaps a little muted by the fact that it wasn't a Skyline. Since Nissan axed the Skyline GT-R model with no replacement in sight, many British buyers thought they were getting a little short-changed when the rear wheel drive, normally aspirated 350Z arrived. After they drove it the carping vanished and the Skyline has been almost forgotten by sports coupe buyers wanting something a little more contemporary. With sleek lines and a torquey 3.5-litre engine, the 350Z was an instant hit. The timing of its introduction was a little unfortunate, as in March 2003 both the Nissan and Mazda's RX-8 were competing for column inches and the four seat layout, rotary engine and bargain basement pricing of the Mazda did much to overshadow the 350Z. Drive the two cars back to back and two very different characters emerge, the Nissan feeling far more of an old school bruiser. A roadster model was launched at the tail end of 2004 alongside a suite of Nismo styling accessories. Something of a major overhaul befell the car in the early part of 2006. The styling was tweaked to the tune of a lower grille, revised lights and a reshaped bumper but Nissan sensibly deciding not to change things too radically. Interior materials were upgraded and the ergonomics in the cab improved but more salient were alterations to the engine. The powerplant was boosted from 276bhp to 296bhp and the rev-limiter was raised to 7,000rpm. The 370z materialised in 2009 to succeed the 350z. 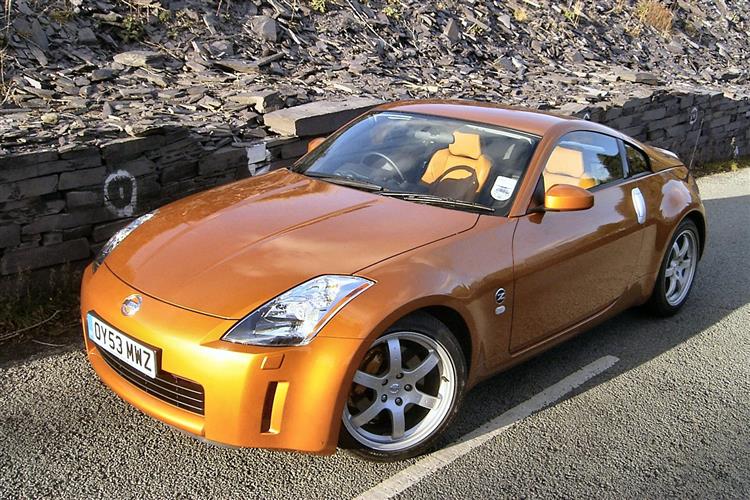