Is there ever a 'best time to buy' an estate car. Right now there is. The launch of the Peugeot 407SW has depressed used values of the estate version of Peugeot's venerable 406 and a quick spin in one will remind you why the car was such a sales success. With a range of quality engines and no-nonsense practicality built in as standard, the 406 Estate still has a lot to be said for it. If you're looking for glamour, it's not exactly the top dog but it offers the sort of handling that Peugeot are renowned for and very attractive value for money. With no shortage of stock available to choose from, you can afford to be picky and don't be afraid to bargain hard.

As you may well be aware, the 406 Estate was initially launched back in 1996 but for the purposes of this editorial we'll limit ourselves to the post-facelift cars that were launched in May 1999. Identifiable by their more angular headlamps and tail lights, a revised centre dashboard panel with new heater controls and radio, the differences didn't stop there. Although the 1.8 and 3.0-litre V6 petrol engines and the 2.1-litre turbo diesel unit were carried over from the previous shape car, Peugeot added a new 2.0-litre petrol engine and a 90bhp HDi turbo diesel. The 3.0-litre V6 was boosted from 194bhp to a brawny 210bhp. A 2.2-litre petrol SRi version arrived in Summer 2000 and a 136bhp 2.2-litre HDi diesel model was added to the range in March 2001. Borrowing technology from this engine, a 143bhp petrol powered 2.0-litre HPi was introduced in late 2001 and sold alongside the existing 137bhp 2.0-litre 16v powerplant. 'Family' versions of the estate line up were also offered with a rear facing twin seat. Peugeot revisited the 406's trim levels in late 2002, deleting the GTX model. The 406 Estate was quietly phased out in summer 2004 in preparation for the launch of the bold new 407SW.

The 406 cabin was revamped as part of the second generation changes - successfully as it turns out, giving it more of an upmarket feel. This has been achieved by a whole series of small but significant measures: resculpting the controls, improving the dials, using better quality materials and adding classy touches like the chrome trim now used on the handbrake and air vent buttons. The seats are better too, with more adjustment, higher backs and improved support. The driver also now benefits from an armrest and steering wheel stereo controls. Where the 406 didn't need changing was in the chassis department. The original model was the most engaging family estate you could buy and this one's little different. Even now few rivals can touch the liveliness of the 406 Estate's feel. Detail adjustments have improved the low speed ride and added extra feel to the standard power steering. You'll appreciate the little touches, like the special ventilation slats running down the side of the boot which are aimed at preventing the inevitable wet dog/ steamy window problem. On the basis that what looks right is right, the 406 estate has a great deal going for it. It's one of the longest cars in its class and there's quite a substantial amount of room inside, compared to some competitors. 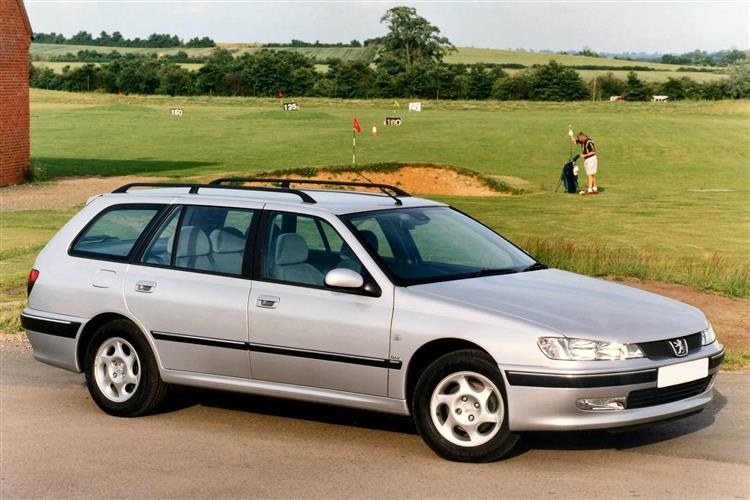