With its savvy lifestyle marketing, bodywork composed of swoops, curves and arcing hiplines and aggressive jacked-up stance, who'd have thought the V70 Cross Country could have come from those staid Swedes, Volvo? Those of you attuned to what's been happening in contemporary car design will know that Volvo is no longer the purveyor of bland but reliable boxes. The V70 Cross Country was at the forefront of Volvo's rebranding exercise and it has played a key part in turning Volvo into a covetable prospect. If you like the tough go-anywhere image but don't want to pay through the nose or suffer a ride that resembles a bulk freighter in a Biscay Force 10, a used Volvo V70 Cross Country is a good bet.

Based on the 'cooking' V70 estate, the Cross Country was launched to critical acclaim in March 2000. Based on the same modular P2X platform as the S80 saloon, it's some 110mm shorter and 30mm narrower overall on a wheelbase shrunk by 30mm. Not a lot of difference then, but enough to drop their biggest estate one class size by Volvo's measurements. The 2.4-litre unit was carried over from the previous generation V70, but was well up to the task, fettled in the Cross Country guise to a punchy 200bhp. Trim levels started out as base and SE, although in September 2000, the base model was redesignated the S, a policy that was replicated across the V70 range.

What You Getword count: 500

Until the mid-Nineties, the Gothenburg company had remained oblivious to the fact that many of its estate cars were being sold to people who also liked the idea of a mud-plugging 4x4. When realisation finally dawned that with 4x4 traction, customers could be kept loyal for longer, an AWD version of the V70 estate was introduced to test the water. The low-key looks and low ground clearance meant a muted reception that lasted until 1997 when at last, the Swedes did the job properly. Despite popular perceptions that this market had long been pioneered by Subaru, the V70 Cross Country beat the Subaru Forester to market, albeit by a mere month. When the car's trim designations were changed to S and SE in September 2000, standard equipment levels were also revised upwards slightly. The price of the standard S model remained fixed, but the car was upgraded to the trim level of the previous SE model, gaining leather upholstery, electronic climate control, an electronic information centre and a pumped-up stereo featuring Dolby surround sound, which would have relieved you of £3,700 had you previously resorted to the options list. The SE model meanwhile got what appears to be the remainder of that list thrown at it. As well as a satellite navigation system with integrated television, there are electrically adjustable heated driver and passenger seats and a headlamp wash wipe system for when the going gets majorly muddy. The list price remained the same, although if you wanted to specify an Audi Allroad to these levels, you'd need the bank balance of a Premiership footballer. Inside, nice touches are everywhere. Though there are no extra passenger spaces in the estate compartment, the rear seat has been cleverly designed with a backrest that can be locked into either of two positions for maximum comfort or vital extra luggage space. Uniquely, it also splits 40/20/40 so that you can drop just the centre section, comfortably accommodate four people and still take skis or other long items. When flat, this section becomes an instant children's play table or optionally, can convert into a cooler box. Another nice touch is the heavy grille that comes down from the interior roof to partition the loading area from the passenger compartment, guarding against flying luggage or over-friendly dogs. Whichever version you choose, there's the peace of mind of Volvo's WHIPS anti-whiplash protection system and a complete complement of front and side airbags. Unlike the Audi's clever air suspension, the Volvo makes do with a more conventional set up, and is consequently slightly less capable in the heavy stuff. There's only one engine option on offer, the S80's 2.4-litre five-cylinder turbocharged petrol unit developing 200bhp, available with manual or automatic five-speed transmission. Surprisingly, there's no diesel option, perhaps because (ironically), the V70's diesel was provided by Audi who wished in this sector at least, to keep that unique selling point to themselves. It can't be too long before Volvo's own D5 diesel appears in a Cross Country. 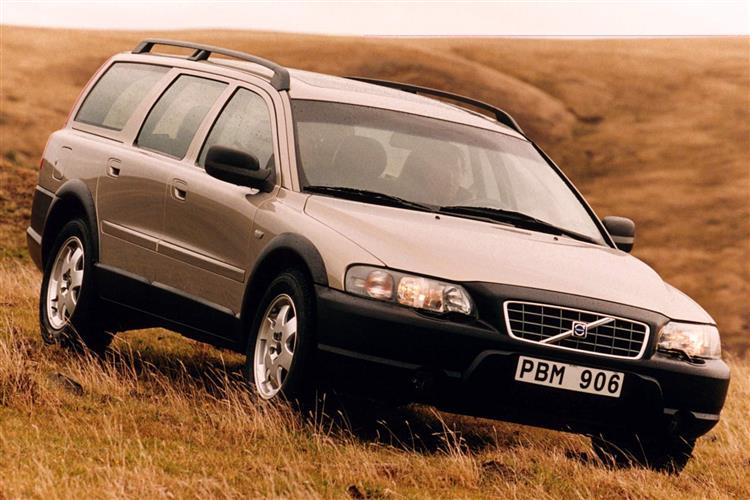