Mazda spent most of the Eighties creating a range of adventurously styled cars that failed to sell well enough. The company went into the last recession in very poor health and had to be rescued by a Ford takeover. Some say its range of late-Eighties cars were too striking for the market, but the handsome 323Fs certainly deserved far more than the limited success they have enjoyed. The 1989 323F is a classic example of a great car that never realised its potential. Only ever available in the UK with two engines and one body style, it was bought mainly as a second car. The importers tried to turn it into a GTi competitor with the introduction of the 1.8-litre GT in 1991, but buyers shunned this version in favour of the more sedately-performing 1.6-litre models. The replacement model was again a good-looker but seemed to have been unfairly overlooked by new car buyers. The latest, more conservatively styled models launched late in 1998 are also quite rare.

Brief, in a word. The 323 has been with us since the late Seventies, but until the late Eighties, it was always as a rather dull Japanese econo-box. In 1989, all that changed with the launch of a curvy new 323, completed with pop-up headlamps. This version was to last on the UK market for five years. Trim levels were standard or SE and both used a 1.6-litre engine. ABS and auto transmission were extras. All cars have the same five-door hatchback body with its distinctive pop-up headlights. The SE has power steering and a sportier interior, while the SE Executive boasts a sunroof. Its 1994 replacement, of the same name, is also a five-door hatchback, though less desirable and harder to find; three and four-door cars also existed between 1997 and 1998. Models vary from the base GL, through GLX, LXi, Executive and ZXi. Engines are a choice of 1.5, 1.8 or 2.0-litre capacity. This last engine is unusual for being a V6 and delivers strong performance with a particularly smooth delivery. The new 323 range, introduced in October 1998, included only the five-door variant, in 1.3, 1.5 and 1.8-litre petrol forms, plus a 2.0-litre turbo diesel. These are still quite rare both on the road and on the used market so you'll probably find the best selection, along with nearly-new and ex-demonstrator examples, at Mazda dealers.

An accomplished front-wheel drive chassis, clothed in a stylish body, offering adequate (1.6) to excellent (V6) performance and handling. The first of the three shapes is generally deemed the more attractive, particularly in GT spec, though a late-model second generation 323F V6 is undoubtedly a very good-looking car; its successor, like the latest 626, looks to some eyes less modern. The usual problem of limited import quotas (and therefore no point in bringing in cheap and cheerful base models) for Japanese cars has ensured that any 323 you find will be well equipped. These cars are in high-demand second-hand due to their sound reliability and great build quality for the price. 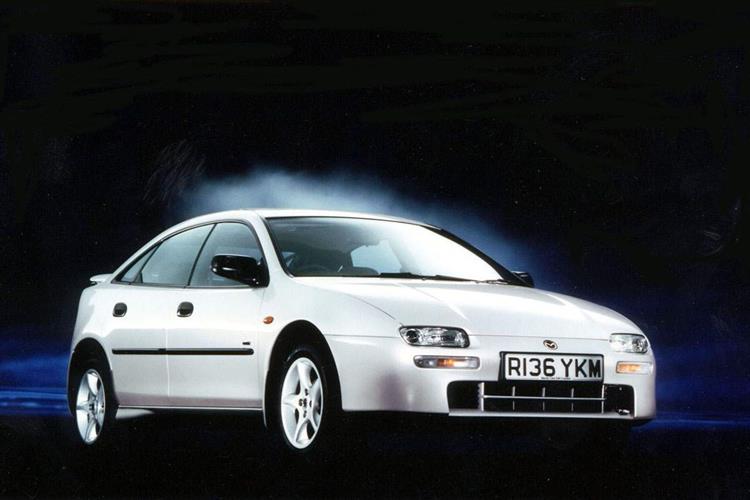