The Nubira, alongside the Lanos and Leganza, represents the second wave of Daewoo vehicles to arrive in the UK. A more sophisticated offering than its predecessor, the underwhelming Espero, the Nubira pitches itself into a marketplace brimful with quality offerings from the mainstream manufacturers. Slightly smaller in size than such standard fare as the Ford Mondeo and Peugeot 406 but facing up to squarely to the Rover 400/45 and Mitsubishi Carisma, the Nubira offers keen value for money and a generous level of trim. Traditionally appealing to a mature clientele who place a premium on value, reliability and a watertight warranty agreement, Daewoo's models, won't attract those who prioritise refinement and handling. The impressive three years free servicing offer on new models is invalidated unless bought through a Daewoo retail centre, unlike the AA cover and warranty for the same period. If this level of after sales service sounds attractive, a nearly new Nubira, whilst not the most dynamic saloon may well be the most commonsense option.

The Nubira was launched to the British public in September 1997. The range has remained largely unchanged since launch, and comprised four door saloons and a five-door estate. Engine options available consisted of a 1.6 fuel injected unit that developed 105bhp and a 2.0 injected motor that made a punchy 132bhp. This would outstrip other 2.0 offerings, some with renowned driver appeal such as Ford's Mondeo or the Nissan Primera, to 60mph despite the Nubira's unassuming appearance and image. There were two available trim levels, based purely on the engine choice. The 1.6 litre car was badged as an SE, and the two litre car carried the CDX nomenclature. An automatic gearbox option existed for the CDX models, but was unavailable on the SE.

The core aspect of the Daewoo showroom appeal is comfortable, hassle free motoring. The Nubira is reasonably well specified in standard trim, with the base Nubira, the SE, being fitted with air conditioning, twin airbags, immobiliser and alarm, four speaker RDS radio/cassette, metallic paint and body colour bumpers. The 2.0 CDX model can most easily be identified by its electrically adjustable/heated body coloured door mirrors, and is also fitted with rear electric windows, six speaker stereo system and front fog lamps. Whilst even the most ardent Daewoo supporter wouldn't argue that these are the most stylish or best handling choices in the sector, the Nubira offers reliable transport backed up by a cast iron warranty and an after sales service of recognised excellence. Esteemed partners such as ItalDesign and Ricardo were drafted in to work on the car, and those expecting economy basic wheels may well be in for a pleasant surprise. As is always the case with previously owned cars, however, a generous standard specification has relatively little bearing on the residual value of the model. Of greater import is the perceived image and with critically acclaimed models such as the Matiz being introduced, Daewoo's stock may well be on the rise. 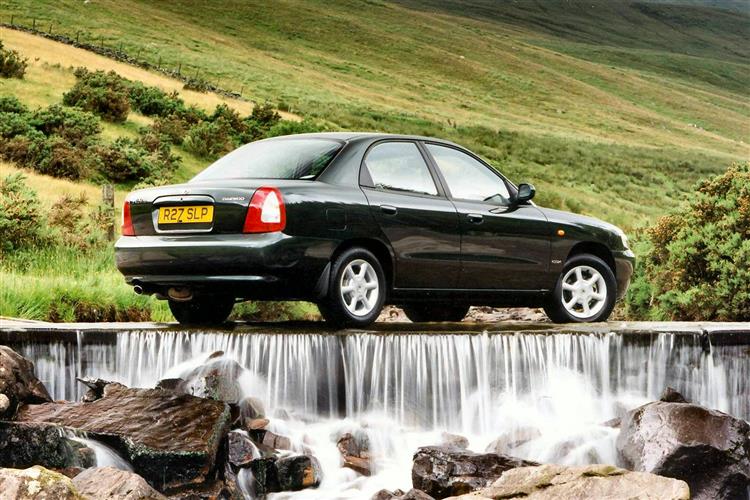