It's odd how the James Bond connection stays with some cars. The Aston Martin DB5, the Lotus Esprit and even cars like the Citroen 2CV all have the indelible stamp of 007 about them. To this list we can add the BMW Z8, a car manufactured at BMW's specialist Dingolfing factory and which featured in 1999's 'The World Is Not Enough.' The car in the movie was a pre-production mock up which was just as well, as it got cut in half by a huge buzz saw. Were it a genuine Z8, one suspects the saw blade would have bent. This is one well-built car, a fact to which a handful of lucky owners will doubtless attest. As a used proposition it makes an interesting case for itself.

BMW has a history of producing limited-run cars that delight the keen driver. The legendary 328 roadster made its debut in 1937 at the Nurburgring, whilst the elegant 507 - of which only 253 examples were ever built - was 1956's most wanted. The M1 supercar and the Z1 roadster have subsequently tickled the palates of those who enjoy their BMW motoring served rare and the Z8 can be added to this list. First shown at the 1999 Frankfurt Motor Show, BMW's designers were asked to imagine that the 507 had never stopped production, the Z8 being the logical evolution of that design ethos. It seems that they succeeded. BMW 507 designer Count Albrecht Goetz paid the Z8 the ultimate compliment: "If I were to design the 507 today, it would look like the Z8." Retailing at £80,000 new, the Z8 isn't one for the masses, and resale values reflect its rarity. Given that it's uses many parts from the BMW M5 (a car that can do no wrong in the eyes of the automotive press) the Z8 received a distinctly cool reaction, many commentators feeling that the pretty styling didn't warrant a £25,000 price hike. Maybe they're right, but who can put a premium on beauty?

The Z8 is a brute-force roadster with Fifties retro looks, boasts a hugely powerful V8 engine and enough high technology to keep the most exigent button-jabber happy. It's also rather rare and exclusive as only 8,000 will ever be built at the German Dingolfing plant. All are left hand drive and only a small percentage have ever reached these shores. The high list price has been a point for debate given that performance isn't really a great deal stronger than a Z3-based M Roadster, plus the steering wheel's in the wrong place - but then, this is a lot of car. Anyway, its rarity makes it an appealing alternative to cars like the Aston Martin's DB7 Vantage Volante and Mercedes-Benz SL55AMG. True, a Jaguar XKR Convertible or a Porsche 911 Cabrio would cost a fair bit less, but to be frank, both smack a little of mass-market next to a Z8. This is a car all about elegant design. The dashboard is a case in point. Like the exterior, it could have been lifted straight from the Fifties - though it's a lot nicer than anything they produced back then. There's a beautiful combination of soft leather, high quality plastic and lovely touches of aluminium, a metal used everywhere from the door handles to the indicator stalks, the steering wheel spokes to the ventilation switches. There's even more aluminium under the skin: virtually the entire structure of the car is crafted from the stuff, one reason why this open-topped roadster has the structural rigidity and therefore the crash safety of a coupe. The resulting lack of body flexing makes it feel a far more solid car than the smaller Z3. And it's a far better looking one. It's not perfect though. Even if you ignore the problems of the left hand drive set-up, there's lamentable fuel consumption (expect to average around 15mpg) further emphasised by the limitations of the tiny fuel tank. Then there's the small boot, the irritatingly fiddly clip-on tonneau cover and the less than ergonomic dashboard layout with its scattered switchgear. 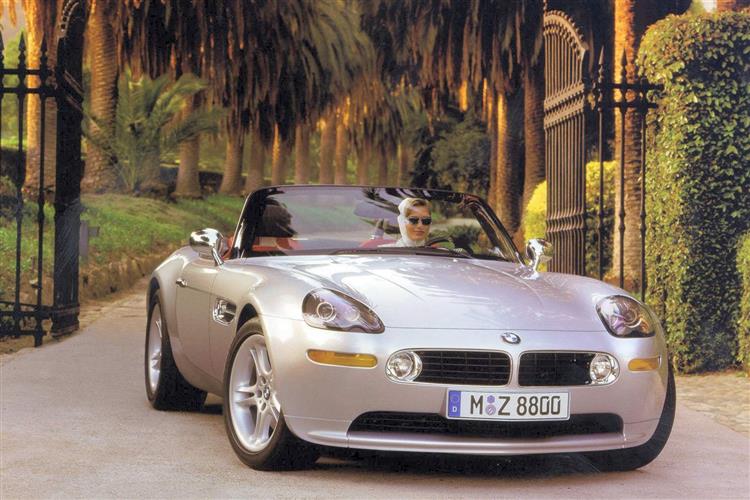