THE START OF A NU DAE (some text hidden)

The third generation Nubira, introduced in 2003, marked a definite change in direction for Daewoo. Until that date the Nubira had campaigned largely on a 'metal for your money' basis, offering a whole lot of car for supermini pricing. With a more competitive market, Daewoo had to do more than just offer something big and cheap. Image counts for a lot and the 2003 Nubira featured Pininfarina styling and one of the more rakish shapes in its class. Is a used example financial suicide or can a case be made for plumping for a nearly new Daewoo?

Daewoo first introduced the Nubira back in 1997 with a restyled second generation car launched in 1999. The 2003 model was more than just a styling job: it was a new car from the ground up. Two engines were offered, a 1.6-litre powerplant available in SX trim or a 1.8-litre unit in range-topping CDX guise. Unlike its predecessor, there was no five-door estate option offered but that didn't stop the press praising Daewoo for its efforts. At last the Nubira was a car you could own without it showing the world how cash strapped you really were. Although the philosophy of getting a car a class above its eventual price bracket still continued, the third generation Nubira was a far more assured proposition, both in terms of handling and ride and in its interior appointments. An Xtra Cool version was launched in summer 2004 fitted with climate controlled air conditioning and a chilled glove box. In October 2004, GM announced that the Daewoo brand would from 1st January 2005 be rebadged 'Chevrolet'. At the same time, they decided that the Nubira saloon would also wear a 'Lacetti' badge, killing the Nubira name from the end of 2004.

What You Getword count: 183

Daewoo claim the Nubira is 'a synthesis of Pininfarina's experience in creating dynamic yet elegant forms'. We'd call it a quietly good-looking family car. Some of the styling touches, especially around the rear three-quarter, are reminiscent of the current Vectra, although Daewoo's traditional three-lobed grille and the big headlamps give it a distinctive look. It's been on sale in Korea since November 2002, where it's known as the Lacetti and sales have been encouraging. The UK Nubira is fitted with a choice of either a 109bhp 1.6-litre or a 1.8-litre 122bhp petrol engine. At 4500mm long and 1725mm wide, the Nubira is a fair bit larger than the old car, although still someway shy of being truly Mondeo-sized. Daewoo has been clever in the packaging department, though; the long 2600mm wheelbase improving all-round interior space and giving the Nubira decent rear legroom. Shoulder width for three across the back is a bit tight due to the car's inherent narrowness, the flipside of which is that the Nubira is easy to thread through gaps that would have a Vectra driver slamming on the brakes. 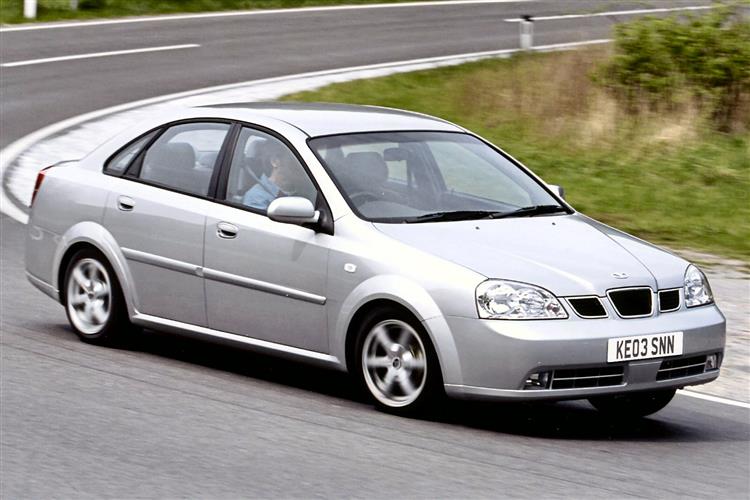