Although the BMW 5 Series has established itself as the default choice amongst executive saloons, the Touring variant has remained very much a minority shareholder in the 5 Series success story. Perhaps part of the problem was that its launch coincided with the relentless march upmarket of both large MPVs and luxury 4x4s, giving buyers in this sector a wealth of other options to consider. Indeed, when the BMW X5 4x4 was launched in 2000, some commentators wondered whether a '5 Series Touring on stilts' was really what the market needed. It turned out that was exactly what the market was after and sales of the Touring remained relatively modest. Although this limits choice somewhat for used buyers, it also means that the right car is often a good deal more affordable than you may imagine.

Although Touring versions of the 5 Series had been around in its earlier guise, when BMW launched the revised 5 Series in 1996 there were no Touring models in the line up. This raised a few quizzical eyebrows at first, but BMW's top brass knew what was coming. The Touring (BMW-speak for Estate) models arrived in 1997, with the 528i and 525tds diesel arriving in January, followed by 520i and 523i Touring models in April and the 540i Touring in September 1997. September 1998 saw the introduction of the excellent 530d SE Touring, powered by the 184bhp direct injection turbodiesel 3.0-litre engine which was to go on to garner such critical acclaim under the bonnet of the BMW 330d. This mega-Touring was a little slow to catch on, hindered in no small part by a hefty price tag that broke the psychologically significant £30,000 barrier. At the same time as the 530d's unveiling, BMW quietly withdrew the unloved 525tds model. Those looking for the ultimate Touring were to have their hopes dashed when, in March 1999, BMW released the M5 saloon and refused to sanction an M5 Touring variant. Few realised in this country that the old M5 was available in Europe as a Touring version and a few left hand drive cars filtered into the UK. If the prospect of a 380bhp estate for £12,00 sounds like fun, you know where to go. The 5 Series range received a through makeover in September 2000. The 520i's 2.0-litre engine was consigned to the history books, replaced by a 2.2-litre unit that developed 170bhp, an identical output to the 523i which, unsurprisingly, was also replaced. Its successor, the 525i was powered by a 2.5-litre unit developing 192bhp, only 1bhp less than the 528i. See where this is going? You'd be right. The 528i was axed, making way for the 231bhp 530i, with its 3.0-litre straight six cylinder engine. To attract diesel buyers disenfranchised by the 530d's big sticker price, but wanting similarly sophisticated technology, BMW also introduced the 525d. This 2.5-litre turbodiesel engine utilised much of the 530d's technology in a more manageable package, still pushing out a respectable 163bhp. BMW also made a number of cosmetic changes for the 2001 model year. Pay attention and you'd spot body-coloured rubbing strips, round fog lights and a redesigned front spoiler. The headlights were now of the fashionable clear lens variety and the indicator lamps became round. To help some of the M5 magic trickle down through the rest of the range, that model's wider chrome grille surround were found on all variants. The V8 versions also gained chromed vertical grille slats. The effect was very subtle but clearly adhered to the BMW family look. The interior benefited from a few tweaks as well. If the rear side airbag option was specified, additional airbags were fitted in the rear pillars, bringing the total number of airbags to no fewer than ten. A revised range of options were also available, including a Mini Disc system, a voice-controlled telephone and a larger television screen. An all-new BMW 5 Series was announced in early 2003, numbering the days of this particular Touring model.

There aren't too many surprises with a 5 Series Touring. You know it's going to be beautifully built, great to drive, understated and well equipped - at a price. You really can't finger a poor model in the range, although if we were being really harsh, the 525tds and two-litre 520i aren't the most inspiring drives. The 530d and 540i are the highlights for the mainstream buyer. "The BMW Touring is a BMW saloon offering an even wider range of practical benefits and values", claims the company's chassis specialist Klaus Faust. "Transport capacity is a significant factor - but not the most decisive one. What counts most is design, dynamic performance and comfort". So what we've ended up with, in layman's terms, is space without clumsiness, driving satisfaction without overt sportiness. More collie than labrador? You might think so. BMW couldn't possibly comment. They're well aware, after all, that the previous shape 5-series Touring was considered too compromised as an estate car by load-conscious Mercedes E-class and Volvo V70 customers. Which is why the latest model has a greater emphasis on practicality without losing the active lifestyle attitude that attracted so many customers to its predecessor. Impressive statistics include a 630kg payload and a 2,000kg trailer load capacity. Self-levelling suspension is also part of the deal, as is a usefully flat 65inch-long cargo floor with a natty elasticised load net to keep loose items from sliding around. As for actual cargo capacity, well that's excellent too; 14.3cuft up to window level when all the seats are taken and 53.5cuft when you split-fold the rear bench flat. Though the jaunty sloping angle of the rear hatch slightly limits the practical use of all this space, BMW has gone to great lengths to ensure that what remains is extremely usable. Take the re-design of the 5-series' light aluminium rear suspension in order to solve the problem of intrusive turrets in the cargo bay. 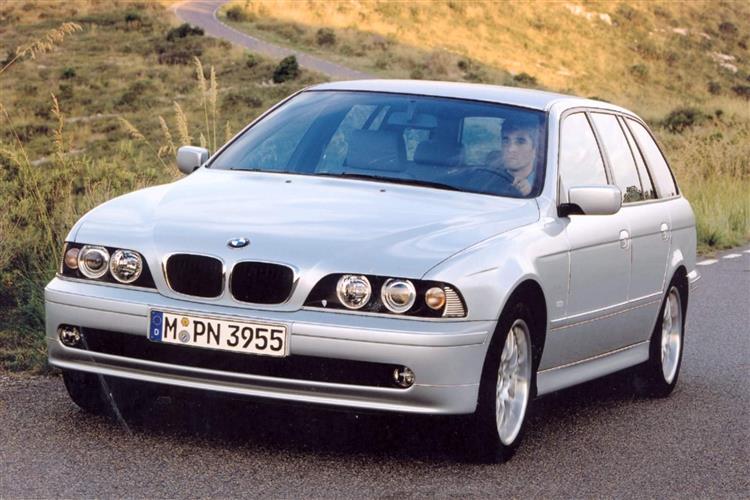