DOES THE BACKSIDE LOOK BIG ON THIS? (some text hidden)

It's not often that Volkswagen fires a blank, but back in the Nineties, in trying to differentiate the Vento saloon from its Golf hatchback sibling, it did just that. The Vento's predecessor, the Jetta, was never really able to forge its own identity, many just perceiving it as a Golf with a huge boot tacked onto the back. Determined not to repeat this error, Volkswagen attempted to position the Vento as a model that sat halfway between the Golf and the Passat. Both figuratively and literally, the British public didn't buy it. Our natural suspicion of small saloon cars coupled with the fact that the Vento didn't offer enough over the Golf ensured it remained a minority interest. As a used buy it's very clever indeed, commanding less of a premium than a Mark Three Golf yet possessing many of the same hardwearing attributes.

Although the Mark Three Golf debuted in February 1992, it was another eight months before the Vento made an appearance. At the same time, cars like the Rover 400 series and the Volvo 460 were attempting to elevate a more upmarket segment of a market that had briefly sparked with the Ford Orion and the Vauxhall Belmont. The Vento offered a rear end that aped the styling of the Passat and also featured a lighter touch when it came to interior trims than the resolutely black and grey Golf cabins. Unlike the Golf, it didn't open with a 1.4-litre engine either, the Vento opting for a 1.8-litre powerplant to initially get things moving. A 75bhp 1.9-litre 'Umwelt' turbodiesel was also offered, as were a sparky 115bhp 2.0-litre powerplant and the headline grabber of the range, the 2.8-litre 174bhp VR6. Although this car seemed to be bought largely by police forces, it nevertheless made a very good private buy, despite its stiff £19,031 original asking price. A 1.6-litre engine was slotted into the Vento line up in January 1994 and lasted until January 1996, while for those really looking to cut costs, a normally aspirated 1.9-litre diesel made an almost unnoticed appearance from April 1994 to January 1996. The Vento range as a whole was discontinued in January 1998 when the all-new Bora was introduced.

The Vento is solidly built, if a little predictable both inside and out. The mechanicals are largely straightforward and safety provision is better than many cars of its era. The VR6 still feels slightly exotic and makes a canny used buy. The folding rear seats can be locked into the upright position with a key, rendering the Vento even more secure than the Golf. There's also a little more knee room in the back of a Vento than you'll find in a five-door Golf. The boot is absolutely huge, offering a full 19.4 cubic feet with the seats in position. 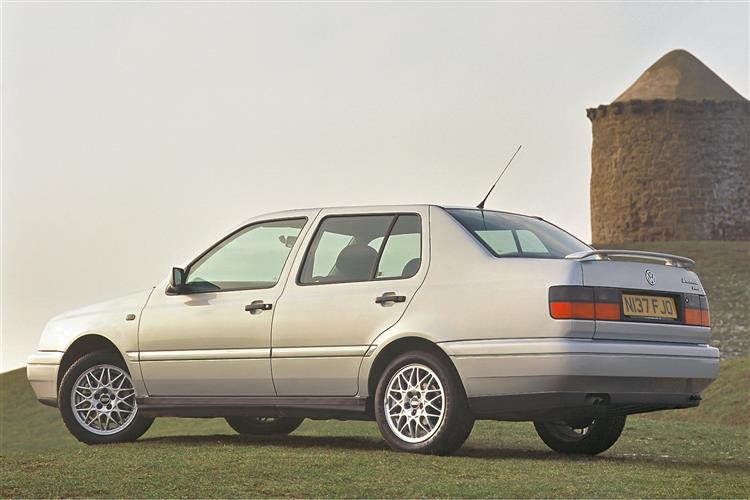