I'M SO PRETTY (some text hidden)

The Laguna II marked Renault's move into the premier league of midrange hatches. Yes, the old Laguna sold in respectable numbers, but there was always an underlying suspicion that it was batting against weak opposition. Ford's Mondeo upped the ante in 2000 with the Series Three Mondeo but Renault had something up their sleeve. The Laguna II is one of the most elegant designs of any class and makes a sound buy now that examples are starting to reach the used market. Good for a Renault? No. Just good full stop.

The Laguna II range was launched in December 2000 with the first cars arriving in UK dealers in January 2001. Three multivalve petrol engines were available, of 1.6, 1.8 and 3.0-litre capacities as well as a 120bhp dCi diesel powerplant. Two bodystyles were offered, five-door hatch and five door Sport Tourer estate. Trim levels followed the Renault trend, starting at Authentique and running through Dynamique and Expression with Initiale specification for the 1.9dCi and 3.0-litre cars and a range-topping Initiale available in 3.0-litre guise only. The 210bhp 3.0-litre models represented remarkable value, being priced from under £20,000 when new. March 2001 saw the option of a five-speed automatic gearbox offered with the 1.8-litre engine, knocking power back from 123bhp to 118bhp in the process. A 2.2-litre dCi engine was also unveiled which packed a hefty 150bhp punch. In early 2003, Renault introduced a 165bhp 2.0-litre turbo engine, designed to plug the yawning gap between the 140bhp 2.0 16v engine and the 3.0-litre 210bhp V6 powerplant. At the same time, a value-packed Dynamique Techno trim level was announced, offering additional features designed to appeal to private buyers but spring 2004 that trim level had been replaced by the GT. Then, a little later, the Euro IV compliant dCi 90 engine joined the range. Renault weren't finished either, 2005 brought more revisions with revised styling and upgraded interior materials. The dCi 90 received a power boost and became the dCi 95 while a Euro IV version of the dCi 120 was introduced with 130bhp. The trim levels were also reshuffled with the GT specification becoming solely available with the high performance GT205 model which packed a 205bhp version of the 2.0-litre turbocharged petrol engine. A little later on, the 2.2-litre dCi engine was replaced by a 2.0-litre dCi with an identical 150bhp output. An even more powerful diesel was introduced in early 2006, a 175bhp 2.0-litre dCi engine which was offered in sporty GT trim. Navigation versions of the Expression and Dynamique arrived in early 2006, making colour screen satellite navigation more easily affordable. These were joined by the Privilege Navigation later in the same year. An all new Laguna was unveiled in autumn 2007.

What You Getword count: 570

In a medium range market that's assuming an increasingly Germanic feel, Renault's Laguna II arrived as something of a breath of fresh air. No chiselled edges or sombre plastics: instead, plenty of design flair and innovative thinking. We've heard - and seen - this from Renault before of course. The difference is that this time, the creative approach was been matched by standards of quality far above anything the company had previously produced. The technology that goes with this more stylised approach is more distinctive too. Take the ignition key - or rather the lack of one. Owners simply get a credit card-shaped piece of plastic that you press to unlock the doors, then slot into the centre console below the stereo. After that, it's simply a question of pressing a starter button to fire the engine. For Lagunas sold on the Continent, it's not even necessary to 'plip' the card: sensors in the car recognise when it's in the vicinity and automatically unlock the doors for you as you walk up. British insurers are rather nervous about this feature, hence its deletion for the UK. There's also an (optional) satellite navigation system that plans your route around reported roadworks. Also on offer is automatic tyre pressure monitoring (a light on the dashboard lets you know if you're running low on air), Xenon headlamps (with 30% more power) and electrochromic anti-dazzle mirrors inside and out (that darken when the fool behind you refuses to dip his headlights). Plus, on the options list, you'll find a whole host of items not normally associated with this class of car: parking distance sensors, cruise control with an 'F1-style' speed limiter to protect your licence in built-up areas, automatic air conditioning with separate driver/passenger controls and the biggest sunroof you've ever seen. All this is in addition of course to all the features that today's medium range family car buyers take for granted. Things like twin front, side and roof curtain airbags to provide protection for all occupants, three-point safety belts for all five occupants, ISOfix child seat fasteners, variable assistance power steering and anti-lock brakes with Brake Assist to aid in emergency stops. Plusher models get traction control and the ESP electronic stability programme that applies the brakes and reduces the throttle should you enter a corner too fast. Step inside the cabin and it's all recognisably Renault (which is to say that the choice of plastics is still not quite what you'd find in a VW Passat). Mind you, in many ways, the cabin is a much more pleasant place to be. No miserable, dark colours. No bewilderingly complex arrays of switches and buttons. In theory at least, there's also significantly more space than was on offer in the old car, thanks to a wheelbase increased by nearly four inches. Not that it feels that way with three adults sat across the back seat: the sloping rear roofline means that headroom is at something of a premium for the vertically challenged. As is space for their luggage, capacities for which are considerably reduced in both bodystyles. The estate's new 'Sports Tourer' tag makes it clear from the outset that Grandfather clocks are out. So is the provision of an extra row of seats in the estate compartment (which not enough people wanted in the previous model). Clearly, in this respect at least, Renault has decided that style must take precedence over substance. 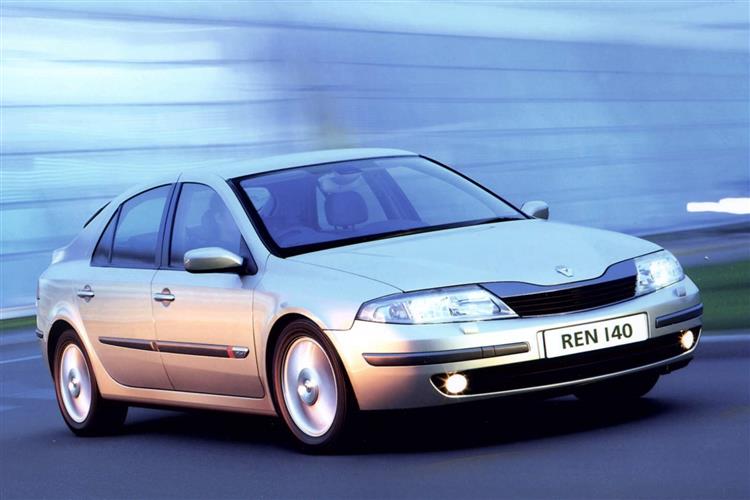