STUCK IN THE MIDDLE WITH YOU? (some text hidden)

As the first car to make Mercedes SLK-style folding hardtops accessible to the masses, Peugeot's 206 Coupe Cabriolet deserved success and landed it. Any affordable convertible that can put one over the Mazda MX-5 has to be very special indeed and the 206 CC certainly captured the hearts of thousands of British buyers. Once the novelty of that clever roof had worn off though, the 'early adopters' switched to the next in thing, leaving a healthy stock to choose from on the used market.

Launched at the tail end of 2000, the 206 Coupe Cabriolet was an instant hit. Few thought such design and technology was cost effective at less than £15,000 but Peugeot proved the doubters wrong. Two models were launched, the 1.6 and the 2.0-litre variants and straight from the outset many owners reported problems with the electric roof sticking in a halfway position. Peugeot made some changes to the design of the hood and in June 2001 launched a four speed automatic option for the 1.6-litre car. July 2002 saw a pair of special editions, the Silver and Black launched. In spring 2003 the 206 CC was subtly facelifted to the tune of a honeycomb grille, the obligatory clear headlight lenses and a bigger chromed Peugeot lion badge on the back. Uniform coloured rear light lenses were also introduced along with body coloured side rubbing strips and bumper inserts. An HDi diesel version was added in 2005. The 207 CC arrived in showrooms in March 2007, replacing the 206 version.

The problem with most hatchback-based cabriolets is that they've always had an inescapable pram-like quality about them. The stubby proportions, untidy hood mechanisms and inelegant rollover bars made them look about as graceful as an industrial dumpster. That's one accusation that you could certainly never level at the 206 CC. Even with the roof up, it has a cheeky coupe appeal and with the hood down the long rear deck ensures the little Peugeot is svelte enough to avoid any pram-like connotations. The massively popular 206 GTi formed the basis of the car before undergoing some rather serious surgery. Operating the roof is simplicity itself. Behind the sun visors are a couple of latches which you'll need to unclip before pressing the button next to the handbrake. At this point, a set of electronically controlled hydraulic motors will go to work, lowering the windows, popping up the rear deck before collapsing and folding the roof in on itself. It's then swallowed by the rear bootlid. It's not the quickest operation, taking around 20 seconds, but Peugeot have cleverly let the mechanism continue with the car crawling forwards at up to 7mph. Despite the appeal of the roof, don't get the impression that it's the only aspect of the 206 CC worthy of note. The interior of the little Peugeot received some welcome attention. One of the complaints regarding the 206 GTi was that with the upright seating position and distant screen, at standstill it felt about as sporty as your average school-run MPV. The 206 CC redressed this somewhat by lowering the seating position, making for a sportier feel. The seats themselves were new to the CC, with firmer side supports and a more adventurous choice of trims, including optional leather. The rear seats are moulded into the back, and whilst they're attractively styled, leg and headroom isn't the greatest. Best to use them as additional luggage space. You'll probably end up using it as well, because with the roof folded down, it eats into boot space quite disastrously. There's still room for a couple of soft bags, but anything more than that will emerge from the boot looking like it's been in a junkyard crusher. Still, you don't buy a car like the 206 CC for load carrying - you'll want to ditch the excess baggage, travel light and get a little bit closer to the elements. The equipment list will be familiar to owners of other 206 models from this era, but the silver-faced instruments are certainly a bit more stylish than the hackneyed white-faced dials found on lesser 206 derivatives. 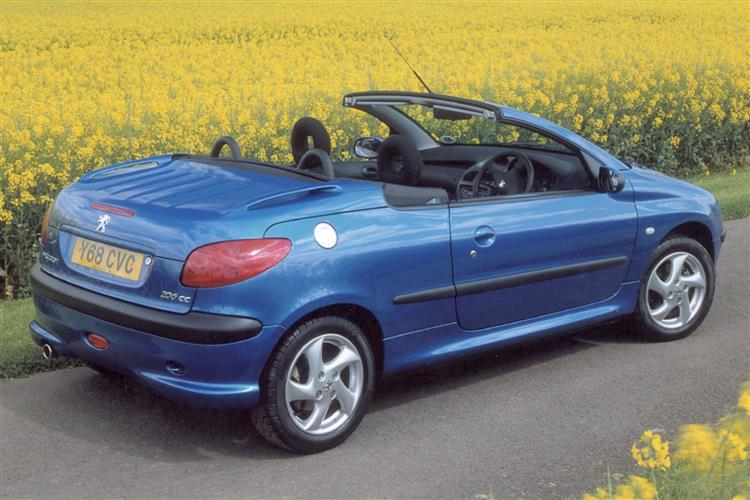