ABRIDGED TOO FAR? (some text hidden)

The BMW 3-Series Compact never got off to a great start in the UK, being viewed by many as a cut-price, outdated BMW for those suckered by the blue propeller badge on the bonnet. True, those early E36 (1994-2001) models rarely hit the spot with enthusiasts, but BMW put a lot of that car's shortcomings right with the E46 series Compact launched in 2001. Here was a model range with modern engines, high tech suspension and up to date interiors. The styling still wouldn't win any prizes in a Concours D'Elegance, but at least it looked a little more contemporary. Used examples represent a budget entry into the BMW fold without too many sacrifices.

It's long been de rigeur among motoring journalists to look down one's nose at the Compact, to brand it an example of profiteering, trading on the badge to turn a quick Euro. Whilst that accusation may have held water for the very first batch of cars to arrive in 1994, BMW has learned its lesson, giving the Compact a higher profile and endowing it with a quality range of engines and features. The stigma is difficult to shake off however, and many still view Compact drivers as the sort who'd sell their granny in order to sport a prestige badge. Whilst that may be true of some, there are now a growing number of enlightened drivers who realise that the E46 Series Compact is an excellent driver's car, and a rarity. How many other rear wheel drive hatches are there that are this good to drive? Mercedes comes close with their C-Class Sports Coupe but in truth the opposition is very thin on the ground. The E46 Compact was launched in August 2001, the 316ti and 325ti blazing the trail. A month or so later, supplies of 318ti and 320td diesel models began arriving in dealer's showrooms. The 325ti represented the first time a six-cylinder engine was available in the Compact body shell and has sold in encouraging numbers. In June 2003 BMW offered the Sport trim across all the engine choices and ES value models were also introduced. The Compact was gradually phased out following the launch of the 1-Series in early 2005.

Although few can have any qualms about the engineering excellence of the E46 BMW 3 Series Compact, the styling still divides opinion. It carries over the old Compact's basic shape, but has made the detailing more intricate, bringing it up to date with some interesting, if slightly derivative touches. Those Rover-esque headlamps and Lexus-lite tail lamp clusters don't seem instantly BMW, and few thought the Compact a particularly svelte shape in the first instance. Certainly it seems slightly dumpy parked next to an Alfa 147 or even an upspec Volkswagen Golf. Amends are made to a certain extent inside. Whilst BMW can no longer claim to be exemplars of ergonomic perfection, the latest Compact's dash and interior aren't a great deal different from the standard 3 Series saloon, itself no bad thing. You'll probably be able to see where corners have been cut in terms of materials quality, but it hasn't been done badly and although it lacks the syrupy smooth feel of a premium Volkswagen/Audi product, you certainly won't feel short changed. One of the greatest criticisms of the outgoing Compact was that the rear seat accommodation was a little, well, compact. Adopting the lengthier wheelbase of the saloon, the latest Compact addresses this particular gripe, knocking supposedly more practical rivals into a cocked hat. Luggage space is more than adequate, and for those who make a habit of transporting washing machines, BMW claim the Compact will easily accommodate one with the rear seats folded. Washing machine removers? Has niche marketing finally reached its logical conclusion? For the rest of us the Compact marks a decent balance between practicality and performance. 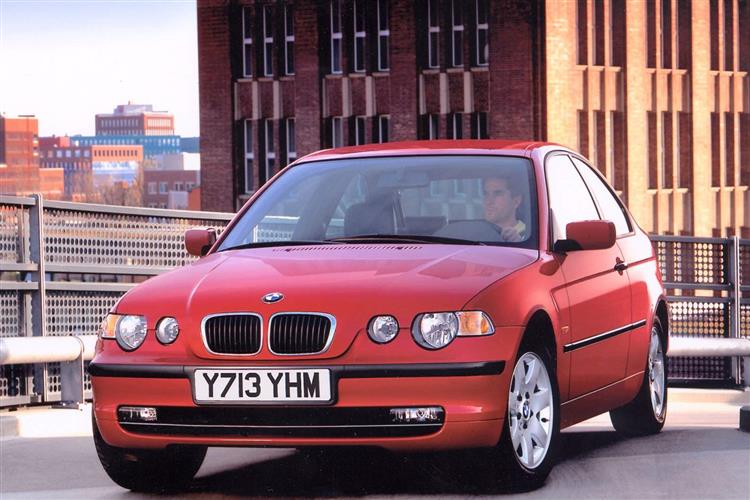