It's easy to take cheap pot shots at Vauxhall's Vectra but pause to examine what it was built for and how well it achieves that task and you have to admit that it fulfils virtually all of the criteria. Fast, quiet, smooth and inexpensive, the Vectra was initially targeted at high-mileage business users who needed exactly such a car to ply the motorway network of Great Britain. For those expected to carry slightly bulkier samples, the Vectra Estate came to be a reliable and trusty workhorse. Exciting it most certainly isn't, even in sportier specifications, but it's a very canny buy for those looking for something inexpensive and capable.

The Vectra estate was launched in autumn 1996, fully a year after the four-door saloon and five-door hatch made their debut. From the outset there were 1.6, 1.8 2.0 and 2.5-litre V6 petrol engines. A 2.0-litre TDi diesel powerplant was also offered, followed a year later by the intercooled DTi unit. Initial trim levels consisted of Envoy, LS, GLS, SRi and CDX, though there were limited editions such as the .com. In March 1998, new 120 and 140bhp SRi variants were launched along with a revised SRi V6 and even faster GSi V6 models. The range was completely revised in March 1999, though the changes were hard to spot. There were revisions to most of the engines and a new 1.8-litre petrol unit was added, as well as 2.0-litre LPG 'Bi-Fuel' models. The handling was said to be improved and equipment levels were up. The nose section was slightly restyled along with the tail lights. 'Old shape' GSi models continued on sale until a 'new shape' GSi V6 (with all the visual tweaks) arrived in August. In early 2001, new engines were introduced to the range, the old 2.0-litre petrol unit being replaced by the 2.2-litre powerplant first seen on the sporty Astra Coupe. The diesel line-up was improved too (including 100bhp and 125bhp DTi units) and a 2.6-litre V6 replaced the 2.5-litre V6 in top versions. A bargain Tourer version of the 1.8 LS estate was introduced in autumn 2001 to buoy up sales and Dualfuel LPG and CNG conversions were offered across the 1.8-litre range. The range was replaced by an all-new model in Spring 2002.

What You Getword count: 249

A well-equipped and handsome estate car, but one that many consider a little too ordinary. Horses for courses, though, and compared to say, the Mondeo, the styling is certainly restrained. Perhaps this is more appealing to many buyers. The quality of the interior is a major step forward over the Cavalier and, together with the increased roominess, means the Vectra can be taken seriously as a true family car, in a way that the 'cosy' Cavalier never really could. If you opt for the Design estate, you'll find clever detail touches that have 'Lifestyle' written all over them. Take the standard roof rails. The ski-hatch through-loading facility that's available even when the rear seat backs are in position. The useful security compartment hidden in the boot floor. The restraining net that stops your shopping from hurling itself at you during an emergency stop. And the luggage cover across the loading bay to protect your valuables from prying eyes. Lift the light and easy tailgate and you'll find 16.2cu/ft of space with the rear seats up - 52.6 cu/ft with them folded down. Thoughtful touches - such as the sill of the loading deck being just 22" off the ground - will for many, make up for the marginal lack of total space when compared with rival models in this hard-fought sector of the market. The designers, who wanted the last word on the subject, contend that a 1000-litre box will fit into the back and I wouldn't doubt it. 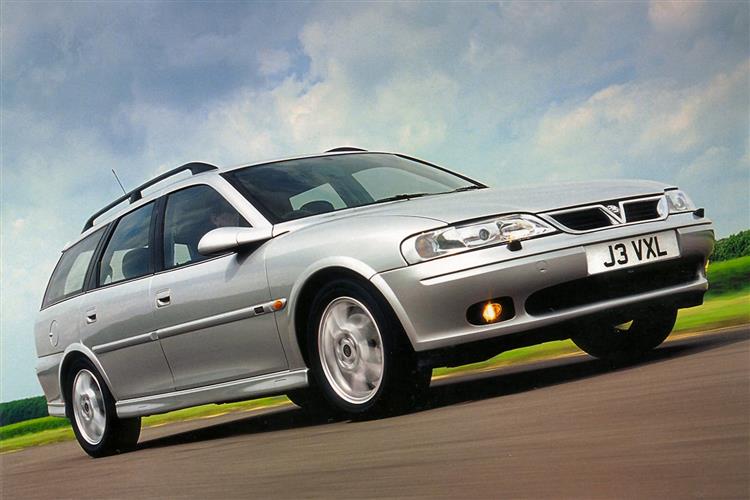