Replacing BMW's Z3 was never going to be an easy task. Although the Z3 had never received a great deal of critical acclaim, sales had nevertheless been very strong. The Z4 was a very different car, BMW leaning a number of lessons from the product life cycle of the Z3. With the press on their side, Munich was finally able to trade blows with the likes of Porsche and Mercedes in an increasingly competitive roadster arena. A used Z4 makes a very interesting buy, especially as by far the largest quantity of used stock is represented by the more powerful six-cylinder models.

Never let it be said that BMW can't learn from its mistakes. When it first introduced the Z3, it began with a weedy 1.9-litre model that was pitched as competition for the Mazda MX-5. With that foundation, it was always going to be difficult to build the Z3 into the sort of aspirational sports car that customers should be paying over £30,000 for when more powerful versions were introduced. The March 2003 launch of the Z4 saw a very different tack. Only 2.5 and 3.0-litre models were available initially, reinforcing the perception that this was a high-end, desirable piece of kit. The 2.2-litre and 2.0-litre cars were slid quietly into the Z4 line-up towards the end of 2003 and spring 2005 respectively and have proven to be decent sellers. In the early part of 2006, the engine range was given an overhaul. The 2.2-litre unit got the axe leaving a range made up of 150bhp 2.0i, 177bhp 2.5i, 218bhp 2.5si and 265bhp 3.0si units. The fire-breathing M Roadster with its 343bhp 3.2-litre M Sport engine was also introduced around this stage, as was the hardtop Z4 Coupe. Small styling alterations made at the same time included a shoulder line that extends beyond the bonnet edge to the front air dam, a wider air intake below the grille and the rear tail lights featuring horizontal light conductor rods as seen on the Z8. An all new Z4 arrived in Spring 2009.

It's hard to recall but it's worth noting that many were unconvinced by the styling of the Z3 when it was first launched, BMW later carrying out a series of design tweaks to remedy the perceived inconsistency between the pugnacious front and the apologetic tail. The Z4 has no such problem. It's unconventional all over. Most of the attention has been paid to what designer Chris Bangle describes as the 'flame surfaced' flanks. These feature a curved line along the bottom of the doors that at first looks as if the car's sills have collapsed. Give it time and you'll get used to them. Everywhere you look, there are details that catch the eye, sometimes clashing in a 'look at me' clamour. It's not a beautiful car, but it's certainly strikingly muscular. Any effete aesthetes looking for a pretty set of wheels may be a little overwhelmed by the Z4's aggressive bearing. Most think it's Bangle's best BMW to date. The hood is a superb fully automatic affair with no manual intervention required whatsoever. Simply prang a button on the dashboard and the whole thing retreats in less than ten seconds with no clips, latches, poppers or stress. The Z4 promises an easy life but who will these laid back takers be? It's an open secret that the Z4 - like its predecessor - has been targeted at the lucrative US market. Don't let that lull you into thinking this is a blousy boulevardier. The Z4 has some serious sporting credentials. 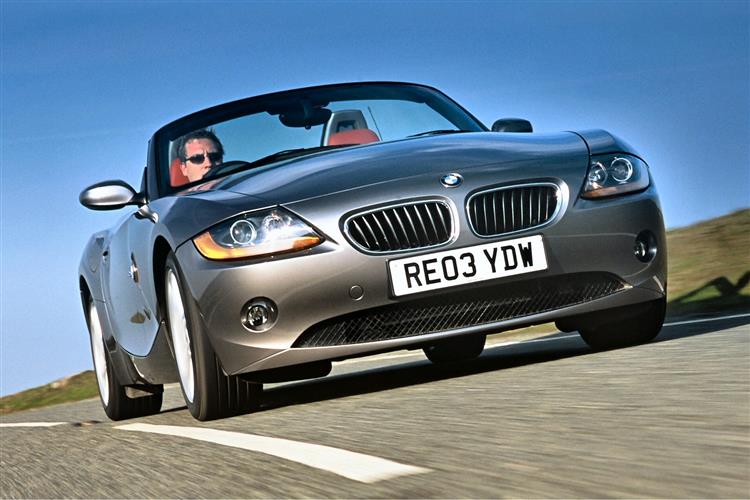