A TRIBUTE TO THE FREE MARKET (some text hidden)

"The Maverick was one Ford that British buyers never really took to their hearts. It was certainly late to the 4x4 party. Perhaps they never forgave it for that. More likely, however, a lack of image was to blame. Not even the most optimistic of Ford dealers could pretend that this was any kind of Range Rover. The sensible ones concentrated on its more hidden virtues; a rugged build, surprisingly good off road ability and a proven reliability record. These attributes make it a good prospect as a secondhand buy. And despite the fact that relatively few were sold, prices are attractive on the used market." These words were in fact the introduction to a model guide on the previous generation Maverick introduced in 1993. Eight years down the line they apply equally to the Series II model. British buyers, it seemed, could countenance a Ford supermini or family hatch but anything that resembled a 4x4 was consistently shunned. This represents a pity, as owners discovered the Maverick to be a machine with more than a few redeeming features.

Whereas the first generation Maverick was introduced as a joint venture with Nissan, the Series II version was developed with Mazda, another Japanese company but in this instance one that Ford had developed a controlling interest in. The Mazda Tribute and the Ford Maverick were offered side by side in many countries, but here in the UK Ford pulled rank and had a clear four months run at the market before the Tribute appeared in August 2001. The job was complicated by the fact that between the inception of the Series 2 Maverick project and it arriving on sale, Ford had founded the Premier Auto Group, a key component of which is Land Rover. The Maverick had suddenly become a car that was utterly redundant. What was the point in spending money promoting a car that was competing against - and if Ford were honest with themselves - didn't stand a chance of muscling out the market leader, the Land Rover Freelander? And so it proved. Promotion for the Maverick was very low key and customer take-up was similarly underwhelming. No diesel version was ever offered and more modern rivals soon extinguished what little spark of interest surrounded the Maverick, leaving it to wither on the vine. The Maverick quietly disappeared from the pricelists towards the end of 2003.

What You Getword count: 441

Despite its platform being shred by Mazda, the target market for the Maverick soon becomes apparent when you climb inside. The plastic slab of dashboard betrays the Ford's US-bias more than anything else, the column-mounted automatic gearbox on the 3.0-litre car being probably the least happy aspect of the vehicle, hunting between gears and with detents on the shift that make it difficult to just drop straight into Drive. It's also something of a shame that it's only possible to lock the Maverick into first, second and top (fourth) gear, as third would be the ideal gear to take advantage of the Maverick's surprisingly agility. As we've alluded to, the interior, though well equipped, probably won't impress those with an eye for aesthetics. Everything works, seems well placed and well thought through, and yet feels drab, cheap and uninspiring. Interior space and luggage space is well up to the mark, the Maverick is longer than many rivals, evidence of which is instantly apparent the moment you throw the tailgate open. The rear seat is something of a shapeless bench, but the space available is excellent. Both models get ABS with electronic brakeforce distribution which works staggeringly well, plus air conditioning and an electric sunroof. The V6 also features cruise control, leather seats and an astonishingly ugly six-disc in dash CD player. It's also the only vehicle in its class to feature side airbags and second-generation dual front air bags as standard. The exterior styling works well in a modest way. Ford were trying for a "tough functional appearance" and they've hit the spot whilst taking a big dip into the bin of generic 4x4 styling cues. The upshot of this is that unless you know what you're looking for, the Ford Maverick won't catch your eye, looking as it does like a morphed together rendering of a Freelander and a Honda CR-V. Nevertheless, in offending nobody and excelling in a number of areas, the Maverick, badged the Escape across the pond, notched up 75,000 orders in its first three months on sale. Few of these new owners will be disappointed with their purchase. Whilst the Maverick isn't perfect, it's the sheer honesty of the thing that generates a feeling of partiality towards it. How many times have we heard manufacturers of 4x4s claim that their offering drives like a car, only to find that the car they were using as a reference point would probably have failed an MoT on collapsed shocks? The Maverick is a refreshing exception to this rule, and the V6 in particular gives the Ford a level of on-road utility that few rivals could ever dream of. 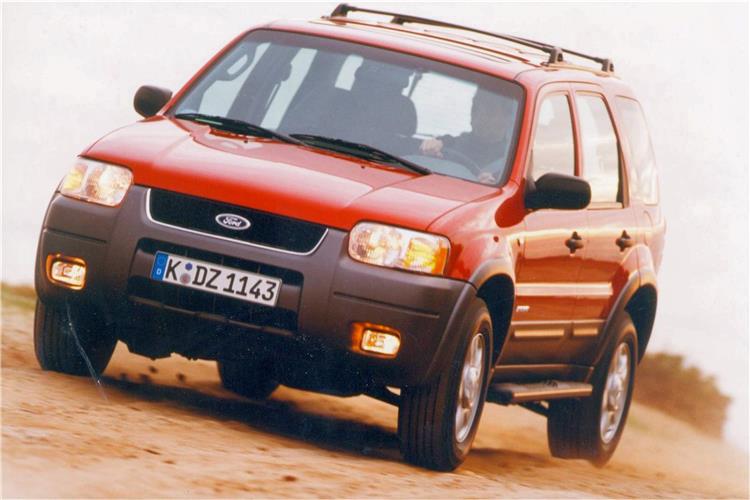