WORTH A MINT? (some text hidden)

The Volkswagen Polo has never enjoyed the cult status of the Golf, but has nonetheless been a major seller in the UK for over twenty years. Following the trend set by the Golf, it evolved from very simple beginnings to become one of the most sophisticated offerings in its class. This Polo, launched in 1999, effectively bridges the gap between citycars of the Volkswagen Lupo class, and premium family hatchbacks like the Golf. In many ways it seems to occupy the slot once held by the Golf. Does paying big money for such a small car make sense in the used market, or is the Polo an unremarkable range filler?

The Polo has been a fixture in the lower half of Britain's top ten best sellers for nearly two decades now, so we've grown accustomed to its charms. Once the preserve of middle-class student girls, the Polo went upmarket, resulting in the model seen here. Although it looks broadly similar to its predecessor, the differences are widespread. The entire bodyshell was revised to provide better accident protection and to reduce interior noise. It is fully galvanised, and altogether the current model only shares 40% of its componentry with the previous iteration. Saloon and estate models were available for those who wanted something a little different, although these are generally in less demand. Two new engines were also made available upon launch in late 1999, a three-cylinder 1.4-litre turbo-diesel and a 1.6-litre 125bhp unit to power the range-topping GTi. At the 1999 launch, these two new engines slotted in alongside another diesel and four petrol units. The other diesel engine was the familiar 1.9-litre 64bhp turbo diesel, whilst the petrol alternatives included a 50bhp 1.0-litre and 60bhp, 75bhp and 100bhp16v versions of the 1.4-litre power unit. Trim levels ran from E through S, SE, 16v and GTi. A completely revised Polo range, based on the same advanced floorpan as the Skoda Fabia was unveiled at the end of 2001, going on sale in early 2002.

Volkswagen pulled off a very clever trick with the Polo. Whereas before there was a temptation for lower-order Polo buyers to trade down to the smaller Lupo citycar, while customers of plusher variants might have been tempted to spend the extra and get a Golf, with this Polo they didn't have to. Wherever you look, you'll find the better aspects of the Golf and the Lupo. Inside, the best of both combination continues. In essence, the dashboard is Lupo-derived, with the same silver 'screwed-on' bezels surrounding the instrument dials, though here, they're protected from sunlight by a single cowling rather than individual covers. Otherwise, it's exactly as you'll find in the smaller car - which means heater controls set rather low to your left but, on a more positive note, space for a proper lockable glovebox and room for the optional satellite navigation system. The quality feel of the interior however, is all MkIV Golf: check out the door trims with their chromed handles, the gear knob, the beautifully damped grab handles and the optional sunroof rotary control. More significantly, you notice the resemblance in the quality and texture of the plastics used and in the bulletproof build quality. The more comfortable seats are borrowed from the Golf too - which means they come with the option of incorporated side airbags to complement the twin front 'bags supplied as standard. Outside, other common touches include razor-thin shutlines and fully galvanised body panels. Nice touches common to all Polos include brighter headlamps with 20% more power and body-coloured bumpers with neat parking nudge strips. A full-length fabric electric 'Open Air' roof is an appealing option. Unfortunately, there's still no sign of deadlocks - though there is an electronic immobiliser. On the safety front, Volkswagen included a stronger passenger cell than was found on previous models, claiming big improvements in crash test performance as a result. Clothing that structure are galvanised body panels. Volkswagen had to renew the machinery that stamped out the old Polo body panels, so decided it might as well make some metal changes to create a smoother look. This is most noticeable at the rear, where the number plate is recessed into the bumper rather than sitting proud on a tailgate now flanked by all-red lamps. 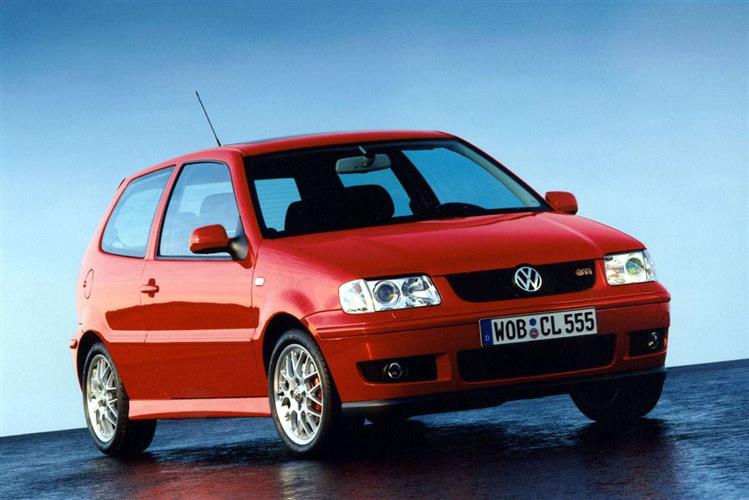