IN SHARPER FOCUS (some text hidden)

Get a bunch of petrolheads together and sooner or later the game of identifying future classics will emerge. Some choices will be met with slack-jawed stupefaction while other will generate howls of derision. One car that tends to get universal nods of agreement is Ford's RS Focus, a hot hatch with serious pedigree, the requisite rarity and enough controversy about it to make it an interesting curio in years to come. In the meantime at least, if you can find one, do us a favour and fling it down a back lane or take it to a track day. Just don't punt it into the scenery. Ford didn't make a whole lot of them.

The genesis of the Focus RS was long and troubled. Ford had been promising a hot Focus for years and the ST170 model in the mainstream range was an unexpected dud. Most expected a turbocharged RS Cosworth variant to appear with four-wheel drive and enough performance to carry on the mantle of the legendary RS Sierra and Escort Cosworth models. That model never materialised and Fast Ford fans had to content themselves with something a little more modest. Or so they thought. Despite 'only' being front wheel drive and packing 215bhp, the Focus RS was as sharp as a surgeon's scalpel, making the old Escort seem the bluntest of implements. Some loved it, others hated it with a passion but the Focus RS could never be accused of being anodyne. Original plans to sell this 215bhp car at around £24,000 had to be ditched when first Honda (with the Civic Type-R) then SEAT (with the Leon Cupra R) both brought 200bhp rivals to market for £17,000 or less. It arrived in dealers in September 2002 and was a big hit with buyers. Ford manufactured 4,501 RS models for Europe and 2,147 were right hand drive variants that found their way here. A decent proportion of those have been crashed, thrashed and trashed, making the RS about as exclusive as modern day production Fords get. Production ended in late 2003.

The kit that's fitted on the Focus RS is the kind of stuff that makes you feel like a rally driver - something that's quite intentional. Ford has teamed up with renowned motorsport suppliers like Sparco, OZ Racing and Brembo to produce seats, wheels and brakes that are the real deal. If you plan to use your car for track days, you should see the benefit of this approach quite quickly. This Focus will go on and on, lap after lap, long after rivals have retired smoking to the pits. Outside, there are 18-inch OZ Racing alloy wheels, a purposeful aerodynamic front air dam, a rear spoiler and chassis settings borrowed from Ford's World Rally programme. Equipment levels run to an in-dash 6-CD autochanger, air conditioning, ABS, twin airbags, a Safeguard immobiliser and a Category 1 Thatcham alarm system. Inside, there's an interior of carbon fibre, leather, aluminium and alcantara. You've a starter button to instigate things and even a gear change light: from the ground up, this car is intended to be the closest you can get to Focus World Rally car. Unlike the Focus ST170, this feels like a bespoke performance car. The bonnet, doors, roof panel and lights remain standard, but every other exterior element is unique, reflecting many of the styling cues from the Focus World Rally Car project, with aerodynamic information being passed between the two cars. In fact, the Focus World Rally Car featured a front spoiler design based on that fitted to the Focus RS. 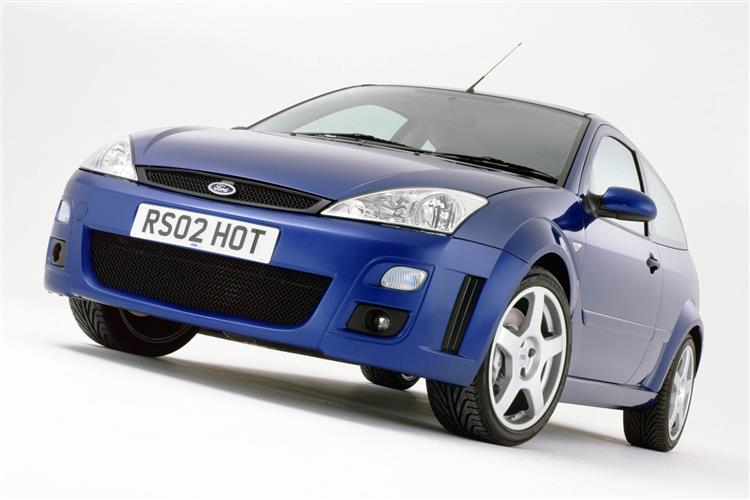