GOOD FOR YOUR REP? (some text hidden)

You. Yes, you lot out there. Collectively you are distinctly puzzling. The Ford Mondeo sold nearly 130,000 units during its first year on sale, back when the press wrote it off as the Mundano. Fast forward to 2001, the first full sales year for the Mark Two Mondeo, a car the press hailed as the greatest invention since the opposable thumb and how many do you buy between the lot of you? 150,000? 200,000? Not a bit of it. You rewarded the labour's of Uncle Henry's finest with a piffling 80,000 sales. Like I said, puzzling. There had never been a car in the medium family saloon sector that rewrote the rules quite so comprehensively as the Mark Two Mondeo. Comparison tests became academic. They were about as predictable as the outcome of the 2002 Grand Prix season. The Mondeo would win whilst the others scratched around for the minor placings. Before too long almost every new car in this sector had shamelessly cribbed from the Ford which, if one is to be brutally truthful, took a fair bit of interior design inspiration from Volkswagen to begin with. As a used purchase it's difficult to recommend the Mondeo highly enough.

The second generation Mondeo was launched at a time of radical shake up in the medium range family saloon market. Industry doomsayers were predicting the whole sector to go belly up as buyers were seduced by premium offerings like the Audi A3 and BMW 3-Series Compact or by mini-MPVs like the Vauxhall Zafira or the Citroen Xsara Picasso. Ford had no contender in either of these markets and Mondeo sales were taking a battering. Time to move the goalposts. Few were ready for what Ford unveiled. With the exception of the unexceptional 2.0-litre TDdi turbo diesel engine, the Mondeo barely put a foot wrong. Keen to rectify this oversight, Ford launched the state of the art common rail 2.0-litre TDCi engine in 2001 and made a series of detail changes aimed to keep the Mondeo at the top of the tree. Electronic Brake Assist, once a £250 option, was fitted as standard across the range. This reduces stopping distances by augmenting the driver's braking effort with additional hydraulic support thus ensuring that maximum braking efficiency is reached. Tests have shown that EBD will result in a Mondeo in the hands of an average driver will stop between one and three car lengths quicker than a standard car. That's certainly the difference between a close call and giving the dog a phone. Security was also boosted by the introduction of auto relock. If a locked Mondeo is unlocked using the remote key fob and no doors are opened within 45 seconds, the system will automatically relock itself. In addition to this, convenience features such as automatic reverse wash wipe were phased in. This automatically activates the rear screen wiper if reverse is selected whilst the windscreen wipers are on. Sounds simple, but then the most elegant technical solutions usually are. The range was added to in 2002 with the launch of the 3.0-litre 151mph ST220 sports model. Those who'd felt short changed by the Mk2 ST200 emerged metaphorically beaten over the head with a sockful of quarters after a spell behind the wheel of the ST220, an estate version of which appeared in Spring 2003. A powerful yet economical 1.8-litre Sci engine was added to the Mondeo line up in autumn 2003, alongside Euro IV compliant TDCi 130 diesel engines. Two more new engines arrived in time for summer 2004. A 204bhp 3.0-litre V6 and a 155bhp TDCi engine which was offered in the ST TDCi. By mid 2005, these had been joined by a 90bhp TDCi and the Mondeo had been subjected to a mild facelift. The all new Mondeo starred in Daniel Craig's debut James Bond movie, Casio Royale before being launched in the summer of 2007.

Elegant is certainly a word that applies to the Mondeo's interior. Flick the switches, then check the quality of fit and finish. Take away the Blue Oval badge and you'd probably guess at compact executive class leaders like Audi's A4 - maybe even BMW's 3 Series. Except, that this car isn't compact. You don't need a tape measure to know that. In fact, there's as much space inside as Ford offered in its old flagship Scorpio, a car from the next class up. And all of the same gadgets, niceties and safety standards. Not that the new Mondeo looks big from the outside or feels it behind the wheel. Despite the extra 150mm in length (and a huge 500-litre boot), the latest model shrinks around you, much like an A4 or a 3 Series. Not that Audi, BMW or Lexus need worry too much. That angular new shape is pleasing enough, but it won't get you a reserved space in the golf club carpark. Ford has given that job to its Jaguar X-TYPE and doesn't want the Mondeo getting ideas too far above its station. Still, against obvious rivals such as the Vauxhall Vectra and Peugeot 406 the shape looks pleasantly clean and crisp. These cars represent the real battleground of course, so let's get down to basics. There are three bodystyles - saloon, five-door and estate - spread over five familiar trim levels (LX, Zetec, Zetec-S, Ghia and Ghia X). Equipment levels include most of what you would expect - air conditioning, front electric windows, a decent quality stereo and so on. There's plenty of stowage space around the cabin too, with perfectly-shaped homes for items like window squeeges, atlases, drinks cans, tapes, CDs, owners manuals and mobile 'phones. Notable options include a facia-mounted CD autochanger and a DVD video system with screens mounted in the back of the front head rests: with films or linked to a PlayStation, that should keep the kids quiet on long journeys. 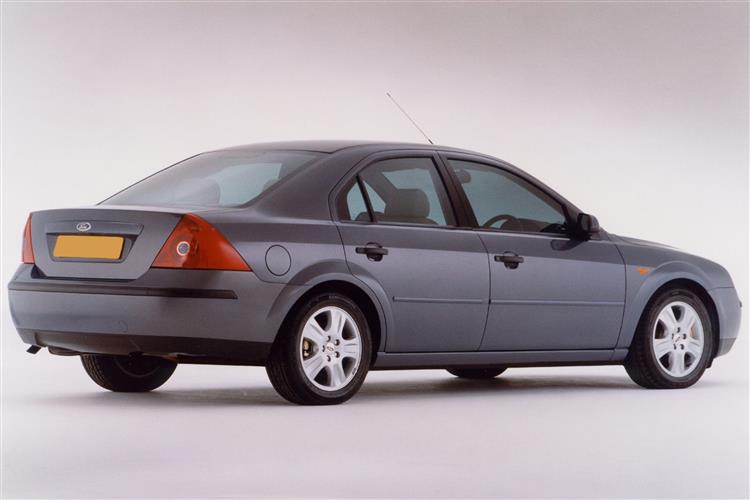