If ever a car was granted an easy run at a target, the E36 BMW 3 Series Convertible was it. Whilst the saloon had to contend with the Mercedes C-Class and the Audi A4, the Convertible version had no C-Class convertible nor topless A4 Convertible to interrupt its smooth ride to big profits. Shopping for a used BMW 3 Series Convertible opens up a big market, plenty of choice and the opportunity to buy as many lemons as gems. Although BMWs are, on the whole, admirably reliable, there are a few facts you need to go equipped with. Find out here.

Although the E36 or third generation BMW 3 Series first arrived on British shores in the early Spring of 1991 it may have escaped your attention that the stylish convertible versions didn't put in an appearance until some three years later, suggesting that the conversion from hard top to soft was more than a mere tin-opener job. Three engines were initially offered, the four-cylinder 318i and six-cylinder 320i and 325i derivatives. The 316i and diesel models were never available with the E36 convertible body shape. A couple of months later the 286bhp M3 Convertible was launched, a car that many felt never warranted the M badge, being far softer in focus than its boxily aggressive E30 predecessor. March 1995 saw the introduction of the 328i Convertible, replacing the 325i whilst in January 1996 the M3 got even more power and a six-speed gearbox. The 321bhp M3 Evolution Convertible proved hugely popular with those who preferred carousing to cruising. Spring 1997 saw the introduction of the 2.5-litre 323i engine which replaced the 320i in convertible guise. All models got a minor makeover in September 1997 that included equipment upgrades and subtly different front end treatment. A sequential manual gearbox option for the M3 Evolution was introduced in January 1998 but didn't prove popular. The Convertible survived until early 2000 when it was replaced by a Convertible version of the E46 series.

What You Getword count: 93

The 3 Series Convertible was the default choice if you needed German quality, four seats and a soft top although it's a little-known fact that Saab convertibles outsold their Munich rivals in this country. No matter, if you want the best, you know where to look. Few compromises were made in the development of the 3-Series convertible. The electric hood still stands comparison with some of the better hoods made today, there's still enough legroom for four full grown adults and the interior design has hardly dated at all. Still an aspirational vehicle. 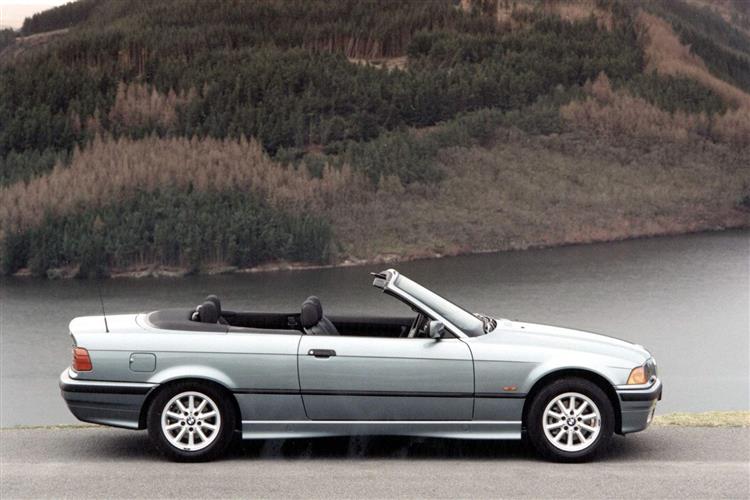