* Introduction Mercedes-Benz is not in the business of getting things wrong. Page through the company's long and illustrious history and it's littered with firsts. First to use supercharging on a passenger car, first to develop the safety crumple zone, first to offer traction control, anti lock brakes, driver airbags, seat belt pretensioners, and stability control systems on their vehicles. Given this list of achievements, it's perhaps inevitable that there have been the odd mishap. The first generation A-Class was one and, if sales figures are any indication, the R-Class sport tourer may be another. Not that the R-Class is a bad car per se. It's just one that the general public don't seem able to get a handle on. This may be bad news for the Mercedes bottom line, but this sort of situation often spells rich pickings for used car buyers. Here's how to land a bargain R-Class.

If buyer behaviour has taught us anything, it's that anything with a hatchback which isn't a monster 4x4 seems to have a definite price ceiling above which customers seem unwilling to venture. Many manufacturers have tried to push this barrier back, only to be met by market apathy. A hatchback, it seems, is still indicative of a shopping car to many. There have been exceptions in recent years but they have largely been specialist kit. Estate versions of supersaloons have found a niche clientele but Mercedes was gunning for a much bigger slice of the action when it started selling the R-Class sports tourer in 2006. The R-Class had been a very long time in conception, so it's not as if the car had been skedaddled into production by impatient senior managers. The concept first saw the light of day way back in 2001 at the Detroit Auto Show as the Vision GST (Grand Sports Tourer) and a clue as to the R-Class' target market could be gleaned by its production-ready unveiling at the 2005 New York International Auto Show. With some 60 per cent of sales set for the US, what relevance would the R-Class have in the UK? Not a great deal, it would seem. Two body styles were released in the UK, a standard length body and a longer wheelbase version, denoted by an 'L' in the model designation. The standard body offered little not already provided for less by an E-Class estate. The longer wheelbase car was a more interesting diversion but sales to date have been extremely patchy. In 2007, Mercedes started phasing down imports of the standard length car, this body type eventually only offered with the R280 CDI model. The R350 and R63AMG also disappeared from the price lists around this period.

Two models are on offer, a regular length version and a long wheelbase variant. It's tough making a case for the regular model. Yes, it looks a little neater in its proportioning but if you're spending this sort of money, it's worth going the whole hog and plumping for the long wheelbase variant. This is a vehicle that can genuinely seat six adults in comfort instead of relegating the final row of seats for children only. Measuring fully 5,157mm from nose to tail in long wheelbase guise, there's nothing apologetic about the R-Class. In fact, it's even longer than an S-Class limousine but offers space for six inside, with around 64 per cent of the vehicle's body length available for its occupants. This is the sort of vehicle designed for customers who aren't accustomed to flying economy. The acid test for a vehicle with three rows of seats is the space from the second to third which in this case is up to 920mm. Moreover, the seats in the middle row can slide individually fore and aft, thereby increasing the seat spacing to as much as 990mm. No longer are the rear seats only suitable for the kids. Despite the swooping roofline, up to 1,027mm of rear headroom is available. The four rearmost seats also fold flat into the floor allowing the load capacity to expand to a massive 2,057 litres. Try finding an estate car that can match that. A number of enticing options are offered, such as the remote control open and close function for the tailgate, the Luxury Climate Control with over a dozen sensors and a separate air-conditioning unit for the third row of seats. A separate DVD/CD player for the rear and a panoramic sunroof will also make you very popular with the offspring. The R-Class isn't all about the expensive options, however, and all models feature a very extensive standard equipment list. 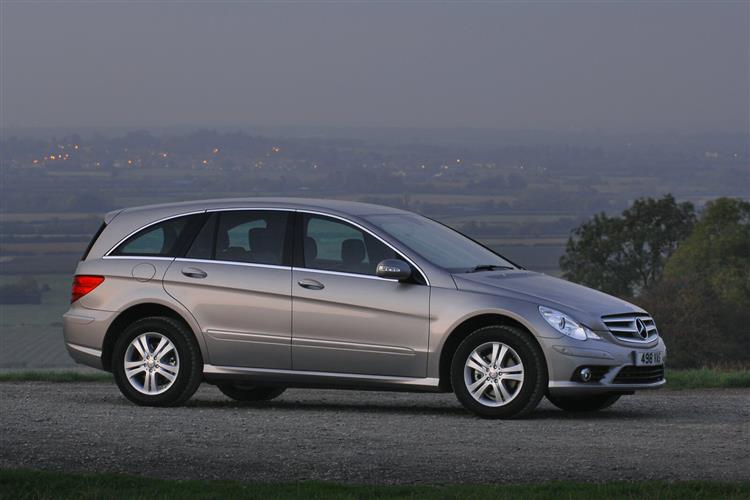