For those who feel that large is just a good start, there's the Mercedes GL Class. Originally designed to replace the antediluvian G Class utility vehicles, a combination of fierce loyalty to the old G and an element of blue-sky mission creep somehow morphed the GL into the behemoth we have before us now. In certain markets - and I'm looking westwards as I type this - there will always be a ready take up of supersized SUVs but does the GL make much sense as a used buy this side of the pond? Find out here.

With the Mercedes GL, it pays to recalibrate your concept of a big 4x4. Here's why. Wind the clock back as recently as 2001 and a Jeep Grand Cherokee was a credible luxury 4x4. Nowadays it's at least two tiers below the most expensive models available. Therefore, a big manufacturer probably needs at least two big, plush 4x4s to satiate this huge and broad demand. Some car makers twigged quicker than others and started to diversify their brands into these sub niches. Mercedes were one of those quicker on the draw and the GL-Class of luxury 4x4s caught all of their German rivals on the back foot. Audi never really got a convincing start in this market, their Allroad 4x4 doing moderate business but never really offering the imposing look and feel many SUV drivers demanded. The Q7 seemed promising but the effort came too little, too late. The market had evolved since Audi first started work on this car and the Ingolstadt company were forced to play catch up. BMW were a little closer to the target, developing a new X5 leaving the way clear to massage the X3 upmarket too, giving it a two-pronged assault. Mercedes, however, are already there with the revitalised M Class and this GL. Plus they have a reworked G Class for those that like to really go off road. The GL's press launch was in Iceland, a venue of suitably thunderous scale for such a giant car. Against all expectations, the GL was surprisingly adept at coping with the rugged glacial terrain and the choice to launch with two diesels and one petrol engine seemed sensible, given the car's enormous bulk. The first cars arrived in dealerships in July 2006.

What You Getword count: 451

Although it wears a German badge, make no mistake that the heart and soul of this car is pure stars and bars. Built in Tuscaloosa, Alabama, the GL is aimed at the well-heeled buyers of New York, California, Washington and Florida, customers who demand a vehicle with the front to face down a Cadillac Escalade or a Lincoln Navigator. Make no mistake, the GL is a serious piece of real estate. It measures 5,088mm from bumper to bumper which is a good deal longer than a Range Rover and dwarfs what looks to be - on a conceptual basis at least - the GL's closest rival, Audi's Q7. As with any such car, much of its appeal hinges on practical aspects and Mercedes has worked hard to endow the GL with family-friendly features. It's far more spacious inside than their R-Class sports tourer and features a centre-row bench seat with four-way backrest adjustment which is claimed to provide far better seating comfort for up to three passengers. The wider section of the 1/3:2/3 split-folding seat has a folding armrest with cup holder and compartment. The backrests and the cushions can both be folded down, for transporting bulky loads while the divided seat cushion folds forwards in individual sections, then the backrests are folded forwards to create a flat surface level with the load floor at the rear. The EASY-ENTRY system provides convenient access to the optional third-row individual seats. To use this facility, the narrower backrest section of the bench seat is released and folded forward together with the cushion. If the front passenger seat is in a further back position, it automatically slides forward. When the third-row passengers have taken their seats, the bench seat can be folded back into position and the front passenger seat returns to its original place. Equipped with the third-row individual seats, the GL-Class is a full-size seven-seater. Either one or both seats can be electrically folded to create a continuously level load floor which, when the centre seat row is folded down as well, extends right the way through to the front seat backs. Original customers who chose not opt for the seven-seater version got an additional stowage compartment under the load compartment floor. The optional rear-seat entertainment system, comprising two colour monitors with headphone jacks in the back of the front head restraints and a CD/DVD player under the centre bench seat, allows rear-seat passengers in the GL-Class to listen to or watch their own choice of music or films. To extend the entertainment programme even further, external audio/video sources or a games console can be connected to the system. It's a great way of keeping the kids quiet on a long journey. 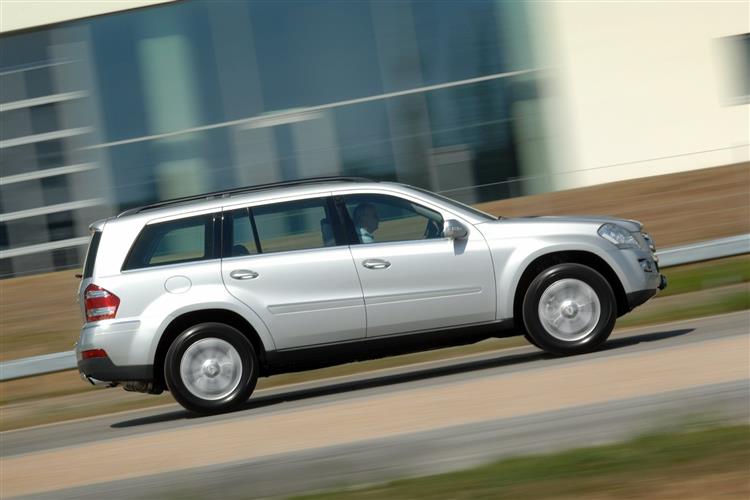