RETURN OF THE KING (some text hidden)

An introduction? You want an introduction to the Porsche 911 Carrera 2? If you're thinking of buying one of these modern classics and feel the need for an introduction, may I humbly suggest your money would be better spent on something a little less focused and with a little less history. The heritage would be wasted on you. If, on the other hand, you're pretty certain of where the latest 997 series 911 sits in the pantheon of sporting greats, then read on and think of it as a celebration.

Let's start at the beginning. Shortly after all the dinosaurs died and turned into oil, Porsche launched the 911. There were a huge number of models spawned after the first officially designated 911 appeared in 1965. The basic shape hasn't changed radically to this day, nor has the rear-engined layout, although there have been a few developments along the way. The key milestones in 911 development include the 1972 Carrera RS model - still viewed by some as the definitive 911 - the launch in 1974 of the first turbocharged model, the arrival of all-wheel drive variants in 1989 and, in 1997, the introduction of water rather than air cooling. The model that ushered this change in was the 996 generation (latter day Porsche models having a three number 'code' to denote their model type. For example an early Boxster is a 986, a late one a 987 in Porsche speak). The '996' marked a shift in Porsche's development of the 911 range. The 996 also did enormously well for Porsche and survived fully seven years before the model we examine here, the 997, was launched. Where the 996 was revolutionary, the 997 is more an evolutionary finessing of the 996 theme, tidying up the styling, imbuing the car with a higher quality, more technologically dense feel and adding even more exciting models to the mix. At first, just 3.6-litre Carrera and a 3.8-litre Carrera S coupes were offered, with Cabriolets arriving in December 2004. In mid-2008, Porsche announced a revised range featuring their new Direct Fuel Injection (DFI) engine. Buyers could also specify the revolutionary PDK semi-automatic gearbox, offering manual pleasure with automatic convenience. There were also a series of very subtle styling changes. These included larger rear view mirrors, newly-designed 18-inch and 19-inch wheels and new lights featuring LED technology.

What You Getword count: 417

Although the shape is reassuringly familiar, in fact only the roof was carried over from the previous model and a whopping 80 per cent of the car is different. Porsche fans came to realize the huge step forward when they heard August Auchleitner, director of 911 development, say that 'the 997 is to the 996 what the 993 was to the 964." A huge leap forward in terms of sophistication, quality and driving enjoyment in other words. Under that sleek bodywork there's a bigger, punchier engine. It's still a flat six and it's still hung out at the back but Carrera buyers will get a 321bhp 3.6-litre powerplant and Carrera S customers will be treated to a 350bhp 3.8-litre unit. It's a naming convention that mirrors the Boxster and Cayenne ranges and is easy to comprehend. 911 purists were glad to see a return to the 993-style round headlamps on the 997, the so-called 'runny-egg' smeared on lamps of the 996 being consigned to history. The wheelarches are pumped up to accept the Carrera's 18-inch wheels and the 19-inch wheels of the Carrera S give this 911 a voluptuous coke-bottle profile. The wheelbase of the car remains unchanged at 2350mm but it's slightly shorter and a few centimetres wider. Windtunnel work has helped to reduce drag and lift although the aerodynamicists were constrained by the desire to keep the car recognizably a 911. The easiest way to tell the two models apart is that the Carrera has a pair of oval tailpipes whereas the S model sports a quad set of exhausts. That and the badge on the back. The 997 took its quality cue form the Cayenne 4x4 and features a three-spoke wheel and an in-dash LCD monitor. Some aspects are pure 993, however, such as the location of the air vents and the roll top along the upper dash. Porsche know their history and so do their customers and the design of the 997's cabin pays homage to Porsches of the past. The quality of materials, however, is like no 911 built to date. Expensively slush-moulded fascia materials make a welcome change to the hard plastics seen in the 996 and it's possible to specify leather trim. The front seats are bigger, the driver sits 20mm lower and there's a choice of four different seats depending on how racy you want to feel. Another neat option to be found on some cars is the dash-top mounted Porsche Sport Chrono, a stopwatch that can time laps. 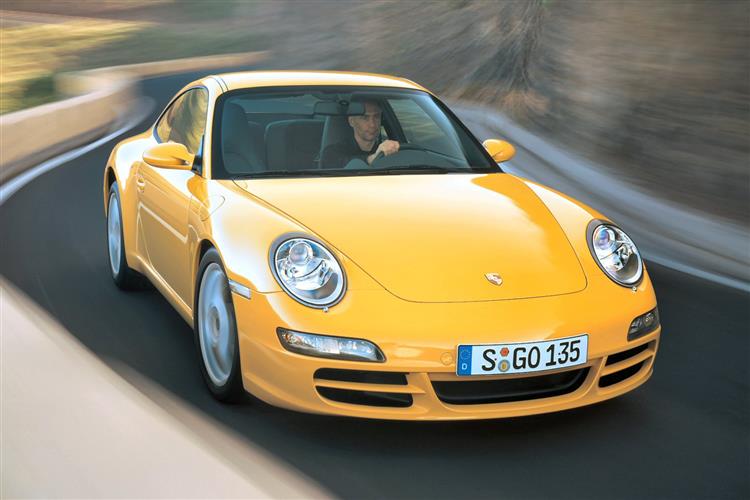