SIMPLY THE BEST (some text hidden)

The Toyota Yaris is arguably the finest car of its generation. Winner of the 2000 European Car of the Year award, it manages to combine frankly amazing packaging with sparkling driveability and pert good looks. It's a car that is genuinely difficult to pick fault with and as a used buy is one of the most bulletproof purchases it's possible to make. All models and both engine choices are worthwhile and combine the ease and convenience of a citycar with the more relaxed major road manners of a supermini.

The achievements of the Toyota designers and engineers tasked with producing the Yaris are put into even sharper relief when you consider that its predecessor was the less than impressive Starlet. This model finally became a black hole in summer 1999, whereupon the Yaris rapidly became the brightest star in the supermini universe. Initially available with only a 1.0-litre powerplant, the range was soon supplemented by 1.3-litre versions. Trim levels ran from S (1.0-litre only) through GS, GLS and SR (1.3-litre only) up to the range-topping CDX. The larger engine also enabled Toyota to offer the Yaris with an automatic transmission option. This was a high-tech four-speed unit that halved the Starlet auto's gearchange time. Other variations included the single-spec Yaris Verso with its more versatile bodyshape (introduced in early 2000) and the potent Yaris T Sport (introduced in Spring 2001). The Yaris range was facelifted in early 2003 with revised headlamps, tail lights, front grille and bumpers. Interior quality was also boosted and equipment levels were reappraised. A new 1.3-litre engine was introduced and, in line with the majority of the Toyota range, out went the GLS, SR, S trim levels and in came designations such as T2, T3 and T Spirit. An all new and considerably bigger Yaris arrived to replace this model at the beginning of 2006.

What You Getword count: 324

The Yaris' key advantage is its clever interior versatility. The short, stubby body is deceptively wide, giving front seat passengers far more room than they'd expect from such a small car. There's also a lot of useful storage space - more than 15 litres in total. Cubbies for everything from a mobile phone to tape cassettes are hidden around the cabin and there's a good-sized split-level glovebox, even though most models are fitted with a passenger airbag. Possibly the only objective downside to the Yaris is the quality of some of the trim and fitments. Whilst they're well-designed, they lack the solid integrity of those in, say, a Skoda Fabia. Whichever Yaris you choose, from the moment you sit in the driver's seat it's obvious this is no ordinary little car. There is no traditional dashboard; in fact you're left wondering where all the instruments are until you turn on the ignition. Then you'll notice the central binnacle which houses an F1-style digital LED display - something that's seldom seen on road cars, and certainly never previously seen on an affordable little hatchback like this. It is angled towards the driver for better visibility and shows speed and revs in numbers. All models have a trip computer that provides information on fuel consumption, average speed and range or external temperature. Equipment levels are high: twin airbags are standard on all but the entry-level S version, while the range-topping five-door-only CDX comes with a CD player and air conditioning. No matter what equipment level chosen, the space available leaves you scratching your head in puzzlement. With a bodyshell 150mm shorter than a typical Fiesta-type Supermini, it's hardly any larger than a tiny city runabout. Yet inside, Toyota have created a packaging revelation. Thanks to a sliding rear bench seat, there's more head and legroom front and rear than in any Supermini rival. It's almost like being in a Ford Focus or Vauxhall Astra-sized family hatchback. 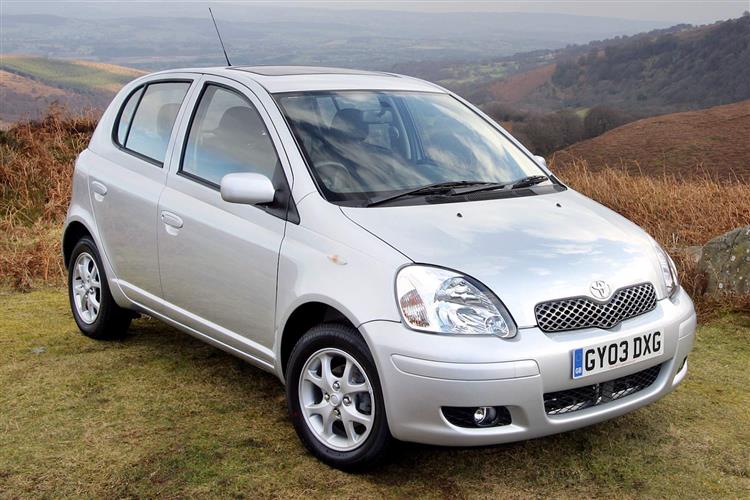