TOYS ARE US? (some text hidden)

In almost every manufacturer's range, there tends to be a forgotten model - the car you just don't see around. For Toyota in recent years, that car has been the Starlet which, prior to the more recent Yaris, was the smallest vehicle in their line-up. The reasons for this are rather difficult to fathom. To put it bluntly, there's really very little wrong with it. All right, so dynamically the Starlet always lagged behind the class-leaders. And older 1.0-litre models certainly struggled to keep up with the traffic. Against that, however, you have to put exemplary reliability and strong build quality. If these things are important to you above all else, the Starlet is likely to be your kind of supermini.

Believe it or not, the Starlet was imported into the UK in one form or another for over 20 years. Thanks to restrictive import quotas, however, it became the forgotten car in Toyota's UK line-up, the importers preferring to focus on larger models with meatier profit margins. The most recent version that's worth buying is the 1985-1991 shape which came only in 1.0-litre three-door form. It was an unremarkable car, popular mainly with older drivers and undemanding female motorists. Better was the newer shape model announced in 1991. Here, there was independent suspension for the first time, along with disc/drum brakes, so at least it felt more modern. Initially back then, buyers were still restricted to the 1.0-litre three-door formula with the 1.0GL. This car was made safer in 1992 with the addition of side-impact door beams. Its worst feature however, the snail-like 999cc 54bhp 1.0-litre engine lasted until 1993 when it was replaced by a far perkier 74bhp fuel injected unit from the larger Corolla. Originally, this came in GLi three-door form. In October 1993, a five-door Starlet was launched for the first time; this became the 1.3GLi, whilst the three-door was badged XLi. This version was further upgraded in July 1994. In March 1996, the most significant Starlet yet was launched. There was an all-new (but still bland) shape and power in the form of the 16v 1.3-litre engine, once again borrowed from the Corolla. Originally, just two versions were offered - the Sportif and the CD - in three and five-door forms. By now however, Toyota wanted to sell more Starlets with British production of the Carina E freeing up a greater import quota. In 1998 therefore, the range was lightly facelifted and expanded to include i, S and GLS variants, as well as a sporty SR with lower sports suspension, a sports exhaust and 15'' alloys. The range continued into 1999 - but was only sold half-heartedly after the introduction of the similarly sized - but much more hi-tech Yaris. It was gradually deleted, with only automatic models remaining until the end of that year when they too were supplanted by the newly-introduced Yaris 1.3 auto.

What You Getword count: 29

An inoffensive little car that won't let you down - but won't excite you very much either. Build quality is impeccable and the last examples were quite well equipped. 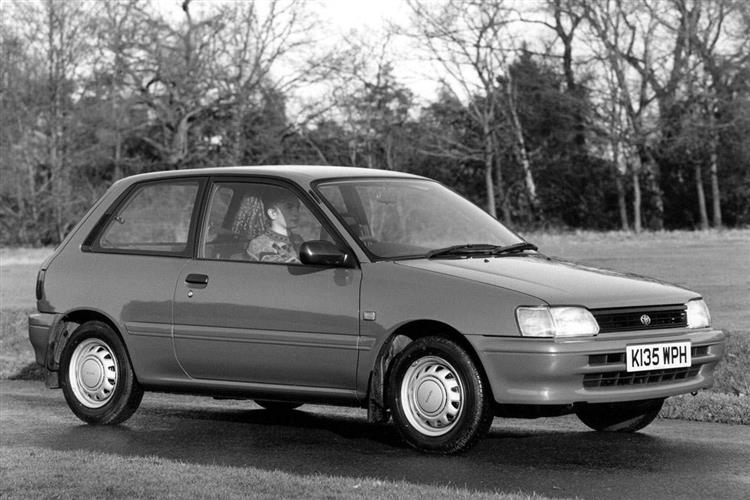