In late 1990, Renault's top-selling people mover, the Espace, was challenged by an impressive newcomer from Toyota. The egg-shaped, eight-seater Previa featured advanced styling and engineering in a premium-sized package. It set new benchmarks for build quality, reliability and handling among full-sized MPVs. Along with limited import quotas and constant demand, this led to the big Toyota enjoying excellent resale values. The Previa aged surprisingly well. Its mid-mounted four-cylinder engine originally caused much raising of eyebrows, with claims from some quarters that such extravagant engineering should be reserved for sports cars. Toyota had the last laugh though, as the Previa needed no mechanical or chassis updates since launch, even in the face of rivals like Ford's Galaxy and Renault's second generation Espace. Sales were never huge, yet a steady supply of Previas entered the UK every year since late 1990 and all were well-equipped, compared to rivals. Critics point to the large size, yet the driving position is remarkably car-like and the handling, though, no longer state of the art, still competitive. Those buyers who baulk at paying £20,000-plus for a new full-sized people carrier would do well to consider a used Previa.

The late 1980s saw the Japanese manufacturers ploughing billions into new model development. Toyota, the biggest and richest of all, decided its new MPV for the 1990s was to be a true clean-sheet of paper design. The result, when it appeared, made all other MPVs look boxy and mechanically backward. The UK-market cars first appeared in September 1990 and all featured the same 2.4-litre four-cylinder engine, mounted on its side, under the front passenger's seat. The handling was excellent, particularly for such a large, heavy vehicle. Clearly, rear-wheel drive and a low-mounted engine amidships made this one people carrier that wasn't all at sea when the tarmac turned twisty. There was only one level of trim available at launch, called GL. Automatic transmission was by far the most popular of the few available options, to such an extent that manual versions have always been difficult to find. Though standard equipment was generous, an even better equipped GX version was added to expand the range in October 1993, while the existing GL received anti-lock brakes. Since then, the original GL gave way to the newer GS in March 1995.With its age now almost twice what we have become used to with Japanese cars, there was finally a second generation successor in July 2000. Though still recognisably a Previa, the new model was completely restyled inside and out but the new 2.4-litre variable valve timing VVTi engine was now mounted conventionally under the bonnet, driving the front rather than rear wheels.

A lot of road-presence, for starters. The Previa is not nearly as compact as the Espace or Galaxy, so get behind the wheel and make sure you're comfortable with reverse-parking - it's longer and wider than that curvy shape makes it look. A fixed-seat configuration accommodates eight people in two rows of three-seat benches behind the front seats. Despite the sloping roof, rear headroom is sufficient and there's ample legroom for all passengers. True, it isn't as versatile a set-up as the Renault Espace, but there is the bonus of extra luggage space, even with a full complement on board. 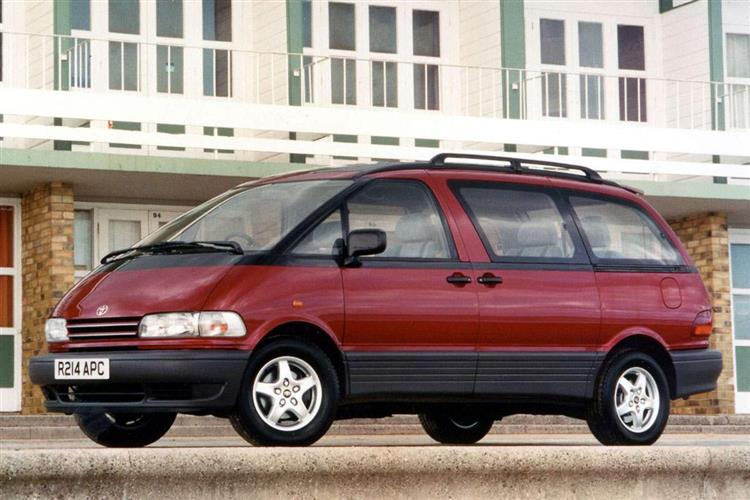