E FOR EXCELLENT (some text hidden)

Reliable, comfortable, if largely unexciting, family transport doesn't come much better than this. Toyota's Carina E is around in solid numbers on the secondhand market and it's a British-built car you can buy with real confidence. The `E` stands for `Europe`, identifying a Toyota that was supposedly specifically designed for the European market (though it didn't look any different from those sold on the other side of the world). This was the car that launched Toyota's presence in the UK in 1992, built at Burnaston in Derbyshire and powered mostly by engines from Deeside in North Wales.

The Carina E was the car charged with substantially increasing Toyota's UK market share, largely through infiltration into fleets. And it was largely successful in doing so. The first car was produced on December 16th 1992 and, by October 1994, 100,000 examples had come off the line, making this easily Toyota's best-selling model. Originally, just three engines were available - a 1.6-litre and 2.0-litre petrol units and a 2.0-litre normally aspirated diesel. A 171bhp 2.0-litre GTi, with power from the Celica sports coupe, followed shortly afterwards, together with a couple of estate variants. In 1994, there was a mild revamp, with the inclusion of a driver's airbag as standard across the range, together with an alarm/immobiliser on most models. A 1.8-litre 'lean burn' engine option arrived in 1985 and, in 1996, Toyota introduced a facelift with twin airbags and ABS across the range and offered a turbo diesel variant for the first time. This range was replaced in 1997 by the all-new Avensis line-up.

What You Getword count: 175

Since the car was launched, there's been plenty of hot new competition in the family sector. However, the Toyota's build quality, low depreciation and rear seat cabin space still makes it a force to be reckoned with. Toyota's response to the safety trend was tardy - Carina Es didn't get a driver's airbag (even as an option) until 1994 and dual 'bags and ABS weren't standard until 1996. Apart from that (and the best-forgotten normally aspirated diesel), there isn't much to criticise. There's certainly no shortage of choice; three bodystyles (saloon, five-door and estate), at least seven different trim levels and a selection of four different 16-valve DOHC petrol engines await you. If you can afford a recent model, try and find one with Toyota's astonishingly frugal 1.8-litre lean burn petrol engine. The more you drive a Carina, the more you realise how carefully thought out Toyota's thrust into the medium range marketplace has been. Though the styling reminds you of at least four other models in the class, the end result is not unappealing. 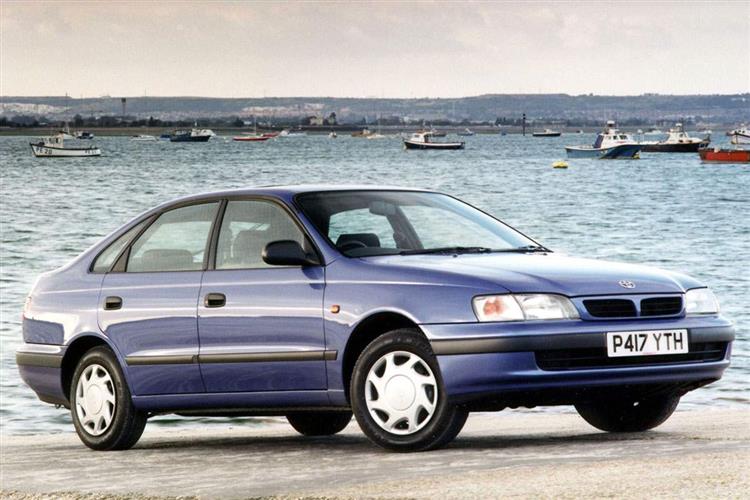