You have to admire Skoda. As one of the world's oldest car companies, they've survived two World Wars, a communist dictatorship, an invasion or two and, worst of all, the darker side of the English sense of humour. Officially, the company is now over one hundred years old, though to be fair, the Czech founders, bookseller Vaclav Klement and mechanic Vaclav Laurin, who set up business in 1895 making bicycles, didn't actually make their first automobile until 1905. What isn't in doubt is that the company is now going through the brightest period in its history and it owes that to one car - the Felicia, subsequently joined by the Octavia and now replaced by the 'fabialous' Fabia supermini. The Felicia was on sale for six years, so there are a good few around on the used market - at tempting prices.

The Czechs are rightly proud of the fact that Felicias have sold in huge numbers across Europe - though much of the credit must also be laid at Volkswagen's door. Though the design team contend that '95% of the engineering was Czech', none would pretend that a car as impressive as Felicia could have been produced without outside assistance. The good Germans pumped in over 60 million Deutschmarks to make sure that the car was right, then cleared the way for the installation of new engines from the Golf and Polo. These included VW's 1.6-litre petrol and 1.9-litre normally aspirated diesel engines, units you'll find in the later Felicias, especially the facelifted models with the new corporate grille, launched in the Spring of 1998. Having said that, most used Felicias will have Skoda's own noisy but reliable 1.3-litre unit - which is still in production. The diesel-engined models have in recent times virtually driven themselves out of the showrooms, such has been their popularity. Buyers are won over by the low price and ultra-low running costs - if you can find a low-mileage diesel Felicia, grab it. A slimmed-down range was introduced when the more modern Fabia was announced early in 2000, including just two engines (the 1.3 petrol and the 1.9 diesel) and two trim levels - Popular and Classic.

Visually, the car looks like a kind of amalgamation between a VW Golf and a VW Polo - which is no surprise given the German influence in its design. Certainly, inside, were it not for the curiously positioned steering wheel, you might think you were in a VW; much of the switchgear and many of the interior fitments are identical. Nor is there much difference in terms of space. In true Skoda tradition, the Felicia is as large as an Escort but, in basic form, cost less new than a Fiesta. If you think it sounds an appealing package on paper, then you won't be disappointed in the showroom either. The smooth, rounded and neatly detailed styling is as impressive as the panel fit and paint quality. In terms of equipment, even the 1.3-litre 54bhp LX model gets an engine immobiliser, rear head restraints, internally adjustable mirrors and headlights, an audible lights-on signal and a rear wash/wipe. The 1.3-litre 68bhp LXi meanwhile, adds a stereo, protective body mouldings and a centre console. At the top of the range, the GLXi and SLXi models come with features like tinted glass and central locking. 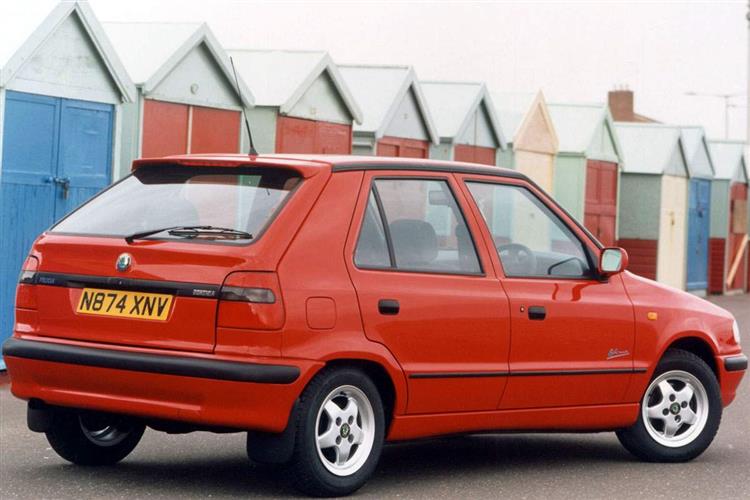