By and large, motoring journalists are a cynical bunch, world-weary hacks who aren't too surprised by the stunts that slow-moving multinational car companies pull. Therefore it came as something of a shock to witness an entire crowd of Europe's finest motoring scribes reduced to chin-stroking befuddlement at its Geneva launch. Why would anybody wish to take a mini-MPV off road? Why, indeed. Renault prefers to put the Scenic RX4 up against existing compact SUVs such as the Honda CRV and the Toyota RAV4, neither of which are usually found axle deep in peat bogs. As a rugged family wagon, the RX4 makes an interesting used alternative.

The Renault Megane Scenic mini-MPV certainly changed the way we thought about carrying people. With five seats packed into a car shorter than a Ford Focus, the Scenic shot to the top of the sales charts. With me-too entrants to the market like the Vauxhall Zafira and Citroen Xsara Picasso eating into the Scenic's market share, it was time for a fresh tack. June 200 saw the launch of the Scenic RX4, a version fitted with a four-wheel drive system for 'extended capabilities'. Renault themselves were no strangers to all wheel drive, having used it on Quadra versions of the 21 and Espace and also had a significant involvement with Jeep. Rather than develop an all-new SUV, it came as quite some surprise to witness the Scenic being transformed into a rather odd-looking egg cum moon buggy affair. Offered with a 105bhp 1.9dCi diesel engine or a 140bhp 2.0-litre petrol unit, buyers could select initially select either Sport Alize or Monaco trim levels, but come summer 2001 these were changed to Expression, Privilege and Privilege Monaco. And that's about all there is to the RX4's short history.

What You Getword count: 180

Forget the lifestyle pretensions, what you're getting is a clever five-door family hatchback that can double as a useful van or any combination in-between. Kids love the flexible seating layouts, the fold-up tables in the front seatbacks and the numerous storage bins for their sticky lolly wrappers, although you just know that they'll end up in the default place - the driver's seat. Still, hardwearing interiors are what mini-MPVs are all about, and the Scenic is no exception. Don't just think family use, either; if you like sitting up straight and high or want the ability to carry bulky items bought on impulse while out for a jaunt, the Scenic is well worth a look before you decide on that ordinary hatchback or estate car. Taking it off road should only be attempted if you're either not too ambitious or you really know your onions. Although traction isn't too bad on the standard tyres, the extra 90mm of ground clearance can tempt the foolhardy into an expensive indiscretion. Don't think you're getting a French version of a Land Rover Freelander. 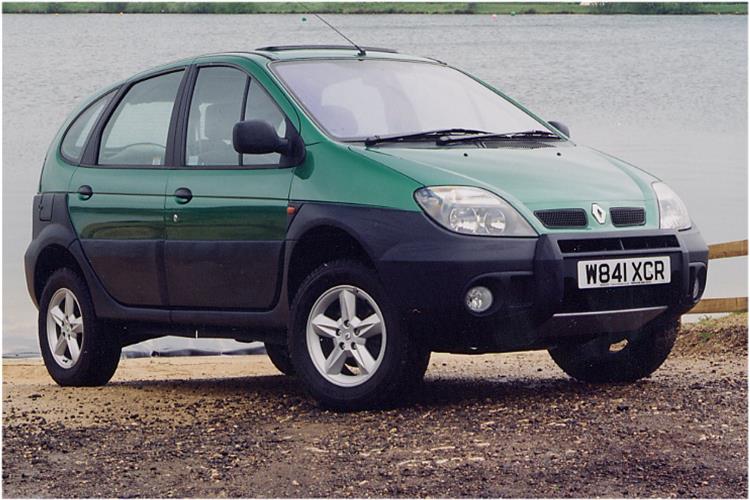