M POWER TO THE PEOPLE (some text hidden)

There aren't many sports cars that are as complete as BMW's M3, reviewed here in its 'E46' guise. This is a sports coupe that will happily undertake the weekly shop, the daily commute and a long distance holiday yet still be able to log a fearsomely rapid time around the Nurburgring. Reasonably reliable, comfortable and beautifully built, this is the car that finally wrested the title of 'everyday supercar' away from the Porsche 911. What's more, it's even something of a bargain, especially as used models are now starting to be priced well below a new hot hatch.

Although the E46 3 Series Coupe debuted in 1999, it wasn't until October 2000 that BMW launched the M3 version. Buyers expecting a fast but refined model were shocked to discover that the M3 had gone back to its roots, serving up a more raw, exciting feel than its predecessor, the E36 model. It was also devastatingly rapid and suddenly made the Porsche 911 look a wilful extravagance. Sales were meteoric and the M3 was the car to be seen in for quite some time. Even today, the E46 M3 has a real cachet amongst performance drivers as a car that doesn't have to rely on image. A convertible model followed in March 2001. Offering far better chassis rigidity than the drop top norm, the convertible lost little to the coupe in terms of driveability. An SMG sequential manual option was offered for both variants in July 2001 and this proved an extremely popular choice. July 2003 saw the introduction of the M3 CSL coupe, a very expensive (£58,455 at launch) lightweight model that saw several speculators lose their shirts on when it was revealed that much of its increased capability was down to its track-biased tyres. The CSL was quietly deleted from BMW's price lists in early 2005 at much the same time that a Euro4 compatible engine was introduced into the rest of the M3 range to see it through its last couple of years of production. BMW had one final trick up their sleeve, unveiling the M3 CS, a model that was, in effect, half way between the M3 and the CSL. Fitted with a manual gearbox and offering more direct steering, 19-inch alloys, bigger brakes and many of the CSL's interior refinements, the CS was a fitting finale for this hugely popular model.

High profile models like the latest M5 and M6 variants may well hog the limelight, but the M3 remains a tightly focused drivers' car and one of the most enjoyable options around. Part of the genius of this model is the way BMW have engineered a certain playfulness into the car without compromising on its basic competence. It really is a 'cake and eat it' sort of deal, offering a practical four seat coupe body with manageable running costs and safe handling on one hand and on the other, a sideways hooligan nature when the DSC stability control is switched off and the M-differential is working its magic. Faced with such a tempting combination, it was inevitable that some owners would want a little more and BMW served that up in the shape of the M3 CSL, a car that cut weight, added power and became something of a cult. At £58,455 a pop, however, it wasn't what one would immediately dub a conspicuous bargain. That's where the M3 CS came in. This took a few of the features of the CSL and added them to the standard M3, bringing with it just the right nod towards exclusivity to attract owners who felt the M3 was bordering on the dime a dozen. Spend any time in the Nurburgring car park on a public day and you'll appreciate in what esteem the M3 is held by serious petrolheads. You'll also have some difficulty spotting your example in a sea of lookalike metal. The CS will definitely help in that regard. All versions of the M3, even the Convertible, are relatively practical propositions with reasonable rear space and a decent sized boot. 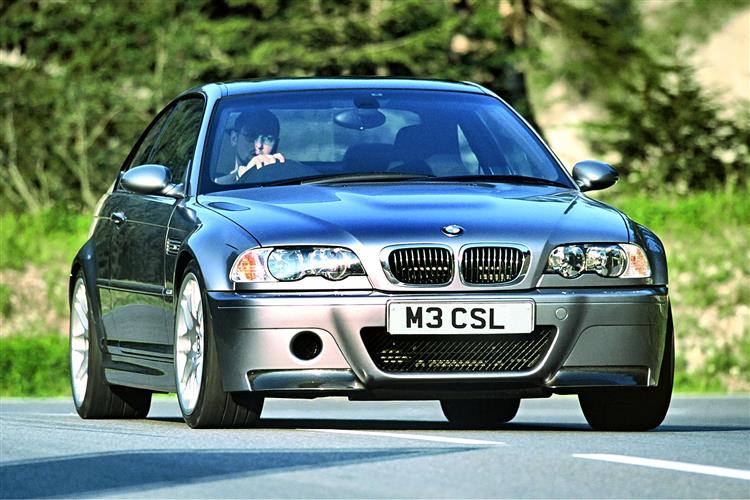