Never was a new Ford launched to such popular acclaim as the Mondeo. In 1993, its first year on sale in Britain, nearly 130,000 examples hit the road, making it the country's best selling car. Other Ford models have had sales success, of course, but none has achieved such critical applause at the same time. The press loved it and major award followed major award, including the European Car of the Year title for 1994. The family-sized Mondeo has become one of the country's most popular used cars.

This revised version of the first generation Mondeo was launched to counter increasing competition in October 1996 and was received as enthusiastically as its predecessor. There were new brighter headlights growing outwards from a larger, more prominent oval grille, while around the saloon's boot, big red rear lamps wrapped around the corners of the car, making it look smaller. Hatchbacks also received larger tail lamps. All versions got chrome around the back number plate and there were new body-coloured bumpers to harmonise the whole effect into a car which, though discernibly different, was still recognisably Mondeo. There was a revised interior, with more comfortable front seats and extra legroom for passengers at the rear. The same range of bodystyles and engines were offered as before (though Ford claimed that minor revisions to all the powerplants had made them more refined and frugal). Safety received greater emphasis, with optional side airbags and a standard three-point centre seatbelt for back seat occupants. Trim levels were as before, with the exception of the temporary deletion of the V6 Si in favour of a sportier ST-24 saloon-only variant. Later in 1997, satellite navigation became an expensive option and in early 1998 the cost of air conditioning was reduced by offering it in lieu of the sunroof on LX, GLX and the re-launched Si versions. The Zetec 1.8 and 2.0-litre entry-level hatchbacks and estates arrived early in 1999, better equipped than the basic Aspens but costing less, despite being fitted with the latest zetec engines (hence the name), a bodykit and smart alloy wheels. In June 1999, a flagship sporting model, the ST200, was launched, fitted with a 200bhp version of the V6 2.5-litre engine already used in the ST24 (which continued). Early 2000 saw the arrival of a two-litre Zetec-S hatchback with and ST200-lookalike body kit plus a new 1.8-litre entry-level Verona with air conditioning and CD player. This range was replaced with an all-new MK2 Mondeo generation the end of 2000.

The Mondeo has had its share of hype - but in this case, it's been well deserved. If all that PR is enough to get you behind the wheel, you won't be disappointed. Apart from the standard airbag, there is enough technology built into this car to make it a real driver's machine. Even the most basic Mondeo is pretty well equipped. On most later LX models (by far the best sellers), you'll find central double locking and Ford's clever 'Quickclear' windscreen. That's in addition to driver's airbag, power steering, anti-theft alarm with immobiliser, tinted glass, adjustable steering wheel, 'lights-on' warning buzzer, electric front windows, a tilting/sliding sunroof and a good quality stereo radio cassette. You're unlikely to be excited by the computer-aided styling of the first generation version, but you won't be offended by it either. In fact, the complete car is a fine piece of design, particularly inside where the elegantly curved dash and door casings are well constructed from sound materials. 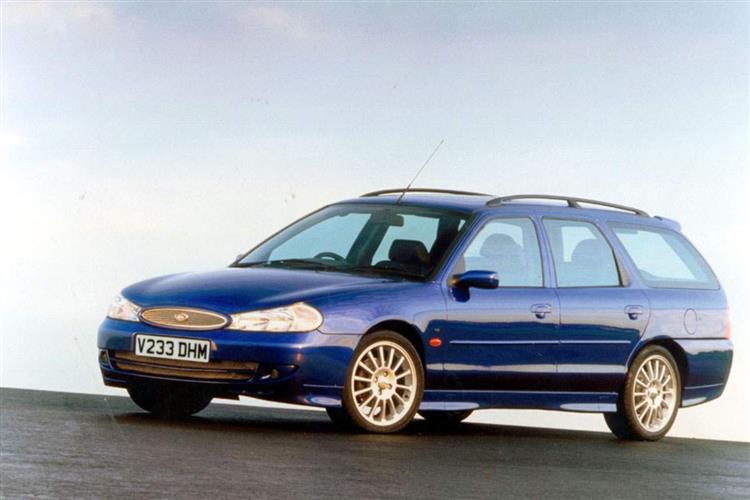