If you subscribe to the view that Volvos should look as if they were designed with a setsquare and a ruler, then the 480 series, launched in 1986, must have come as a huge shock. This coupe-cum-estate harked back to the P1800, last seen in 1973, and offered a viable alternative to the GTi hatches that were in vogue in the mid Eighties. Although never highly renowned as a driver's car, the 480 developed into a durable, well equipped and stylish car that offered the usual Volvo attributes of no-nonsense interior design and unimpeachable safety in a package that was a little sassier than the norm. The 480 series may have represented quite a mental hurdle for many to overcome, but clear it they did, the model selling in respectable numbers. Finding a decent used example shouldn't be difficult as long as you're not buying at the bottom of the market.

The Volvo 480 didn't have the easiest start to life, being originally designed way back in 1978 to replace the P1800. 'Project E12' was beset by difficulties and it wasn't until 1985 that magazines started scooping what was to become the 480ES. The car made its official debut at the 1986 Geneva Motor Show, the project originally commencing in Gothenburg but then being unceremoniously shipped out to the Netherlands. Rapidly facilitating the demise of Volvo's erstwhile 'sporty' hatch, the 360GLT, the 480ES sold in respectable numbers in the UK, despite the fact that its Renault derived 102bhp 1.7-litre engine wasn't from the top drawer. A swifter 120bhp turbocharged version was introduced in December 1988 and a budget S version of the normally aspirated car followed in October 1991. The biggest improvement in the car's lifetime arrived in September 1992 with the fitment of a 2.0-litre 110bhp engine. A number of detail improvements were visited upon the car in September 1993, including the fitment of a driver's airbag, seatbelt tensioners and side impact protection. A 2.0-litre GT limited edition version was introduced in June 1994 which enjoyed a three month production run, then being redesignated the SE. A final 2.0-litre Celebration version was unveiled in May 1995. With a final production run of 480 cars, this model, with two-tone leather upholstery, a CD stereo, alloy wheels, air conditioning and a commemorative plaque is the car 480 collectors - and yes, they do exist - value above all others. The cabriolet car shown at the 1990 Geneva Motor Show could well be the exception to that rule. Based on a 1986 design by Steenstra, this car sadly never made series production due to the bankruptcy of one of the tooling suppliers.

The Volvo 480ES was, despite its troubled genesis, a fairly advanced car for its time. Even the earliest cars utilised modern composite materials for the front end, with side intrusion bars being fitted before many rivals. In fact the car exceeded crashworthiness test requirements by quite some margin. A bonded windscreen, recessed windscreen wipers, illuminated door locks and follow-me home headlamps were also ideas some way ahead of their time. The interior is a good deal more spacious than the three-door layout suggests, with a folding 50/50 rear bench and enough room for four adults. A height adjustable steering column and multi-adjustable driver's seat allowed for a comfortable driving position. A side effect of the front-wheel drive layout was excellent space in the boot. This featured stowage bins in the side trim panels and a lockable central box between the rear seats. A well in the boot floor could be used to keep valuables out of sight as could a retractable cover for the load bay. 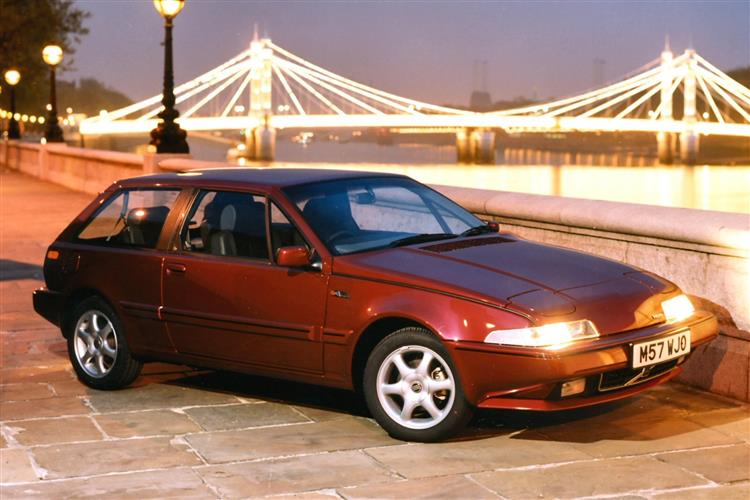