As the big cheese amongst full-sized MPVs, the Ford Galaxy could have rested on its laurels. After all, with sales far in excess of any other big people carrier, the Galaxy didn't need a major revision. It got one nevertheless, and the post 2000 model year Galaxy was a vast improvement in almost every respect. Track down a decent used model and you'll be treated to the most car-like drive of all the full sized MPVs from this era as well as some very neat styling and a proven range of engines. No wonder they're so valued in the trade.

The Galaxy sprang from the joint development between Ford and Volkswagen ultimately responsible for the Galaxy, VW Sharan and SEAT Alhambra. Together, Ford and VW jointly funded the design programme and built a new factory in Portugal to handle production. Basically, Ford's Galaxy and VW's Sharan share the same 2.8-litre V6 engine (the VR6 unit used in the top mkIII VW Golf and the Corrado coupe) and the 90bhp and 115bhp 1.9-litre turbo diesels (also VW-sourced). Ford also added a 2.3-litre-engined option from the Scorpio saloon. The range was substantially revised in the summer of 2000, with new styling, interior trim and dashboard. An old 2.0-litre engine was deleted as was the slow-selling 4x4 V6. Ford's 2.3 now powered the entry-level models plus there was a revised 201bhp 2.8-litre V6. In Spring 2003 the Galaxy range was revised again, with the addition of a TDI130 version. Then, in the spring of 2005, a 150bhp derivative of that TDI powerplant was introduced. An all-new Galaxy arrived in mid 2006, accompanied by its sportier sister vehicle the S-Max, to replace this model.

Inside the heavily reworked post 2000 cabin, it's all much more luxurious - and very different to the utilitarian feel of the previous generation model. Beautifully textured soft plastics, subtle wood strips and flashes of silver trim combine to create one of the nicest Ford interiors seen at that stage - and certainly the most practical. To complement larger door pockets, two substantial stowage boxes were built into the dashboard in response to customers who wanted to be able to hide away the clutter after a weekend and reclaim their car as a business vehicle for the working week. Once you were behind the wheel there was never much wrong with the first model but, as we've suggested, this later version marched resolutely upmarket. The plusher feel was in keeping with Ford's stated aim at the time to steal customers from the executive saloon sector - although this never really materialised. The first thing you notice is the neat four-spoke steering wheel and the aluminium-look instrument surround. A 'Ka-style' analogue clock sits in the centre of the dash in traditional contrast to the gadgetry in the centre console that was redesigned to accommodate an optional satellite navigation system. Those used to VW and Audi products of a similar period will recognise most of the stalks and switchgear - which is no bad thing since nobody made them better. Ford's strengths lie in packaging (hence high equipment levels including air-conditioning, ABS and dual airbags) and tight pricing which has helped make the Galaxy a popular and good value used buy. The options list was vast, including everything from a fridge to a multi-media system capable of entertaining rear passengers with DVD video or computer games via colour screens mounted in the back of the front seat headrests, so you're likely to encounter some extremely well-equipped examples. The Galaxy seats seven people in good comfort (though a more spacious six-seater version was offered). The seats are supportive, although the rearmost row will prove a bit of a squeeze for larger adults, and the vehicle is easy to drive. Parking isn't as tricky as the Galaxy's size might lead you to believe with decent visibility and light steering while this MPV should prove no more expensive to run than an average large family hatch or estate. 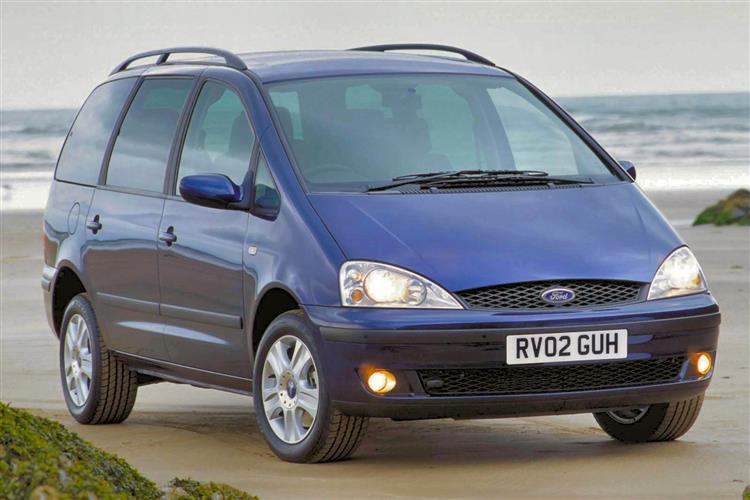