For years, the idea of a Japanese sports saloon with the kind of prestige and status of a BMW or an Audi was a contradiction in terms. The Germans offered the class, the Japanese the value. Mazda's Xedos 6 changed all that when it was launched in 1992 but how does it stack up as a used buy? Thanks to the relatively small numbers brought into the country, the answer is very well. Sales were limited to just 1500 cars each year, making second hand Xedos 6 models sought after on the used market, the result being that their residual values hold up reasonably well. A Xedos 6 is a decent investment in automotive terms - and a surprisingly fine compact executive saloon.

The Xedos 6 was the car that launched the Xedos (pronounced 'ker-see-dos') brand back in 1992, Mazda's attempt to break into the BMW, Mercedes and Audi-dominated compact executive saloon sector. Initially, only the 2.0 V6 version was offered - in standard and plusher SE forms. A year later however, a visually identical single-specification 1.6-litre four cylinder version was added to the range. There was also an automatic option but this lasted less than a year. In June 1996, there were mild revisions to the line-up which included the addition of a relatively affordable Sport V6 model with spoked alloy wheels. A year later, both this car and the entry-level 1.6-litre model were withdrawn. The entire range disappeared quietly from the Mazda price lists late in 1999.

In launching the Xedos 6 line-up, Mazda was the first Japanese manufacturer to recognise the importance that customers were attaching to the question of image - and the first to act accordingly. The company described the Xedos 6 as a car that is 'genuinely different from the rest', which seemed reasonable enough when you saw it in the metal. The ultra-low front, the subtle curves, the flush-fitting glass and the striking front grille; all gave the car real identity. You may see a hint of Jaguar in the feline sweep of the rounded body. Mazda even supposed that some customers would prefer to look at the car as a four-door sports coupe. You could not fail to ignore it either way. The boot was huge, the cabin airy and inviting and the handling taut and responsive. In this respect, it helped that the manual gear change was also excellent and the power steering quick and communicative, lacking the anaesthetic applied to the helm of most expensive Japanese saloons. Equipment levels were extensive in the plusher versions as you might expect. Alloy wheels, anti-lock brakes, tinted glass, electric headlamp levelling, central locking, front fog lamps and powered sunroof, windows and mirrors were all included, for example, on the V6 Sport model. 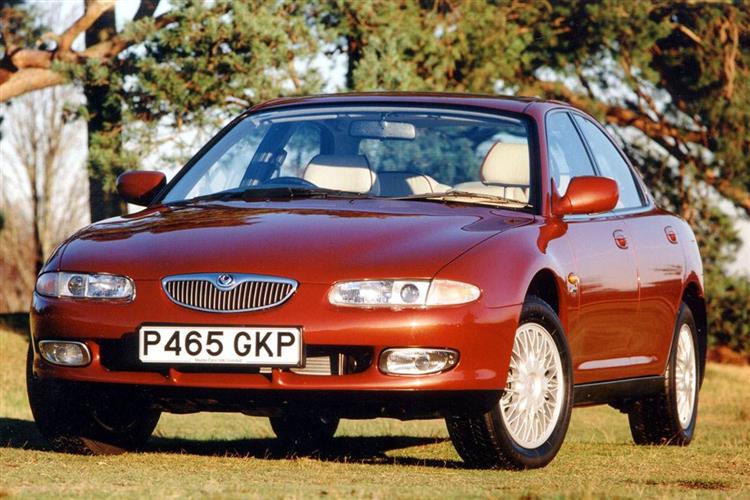