Big Jaguar saloons used to have a wonderful raffish air to them, fine quality leathers and wood trim, but when they came to be sold on, disgruntled owners found that they were worth less than the annual subscription to their favourite gentleman's club. They fell into the hands of sheepskin jacketed car dealers and the sort of rogues portrayed on The Sweeney and this did no end of damage to the Jaguar corporate image. How things have changed. The Jaguar XJ8 series of cars has taken the basic premise of previous generations and made massive steps forward in many key areas, not least of which is quality. Although superficially similar to the outgoing model, the XJ6 series, the XJ8 represents the thinking of a new generation of engineers at Jaguar's headquarters in Coventry. The proportions of the car are wonderfully judged, leading to a Milanese panel of experts voting it L'Automobile piu Bella del Mondo - 'The Most Beautiful Car In The World', surely a testament to its stylist, the late Geoff Lawson. The design philosophy was to identify all of the aspects that turned traditional Mercedes and BMW buyers away from Jaguar and to ruthlessly excise them. The fruits of this exercise have been to make Jaguar residual values amongst the strongest in their class. The Jaguar emblem now says all the right things about its driver.

The achievements of the XJ8 are made all the more remarkable when one considers the rather unenviable reputation for fit and finish that Jaguar had been battling against. The XJ40 series of cars, produced from 1986 until 1994, was saddled with the reputation as an under-engineered money pit. Its successor, the XJ6 series, produced from 1994 through to 1997, introduced tighter quality control and a more elegant shape, but it was with the launch of the XJ8 in 1997 that the full might of Ford's investment in Jaguar really began to make itself apparent. The aim with the model designation for the XJ8 was to make the range easier to understand. BMW and Mercedes had long enjoyed a straightforward range designation, but many potential Jaguar buyers were confused as to what a Sovereign, a Sport, an R, an S and so on were. So pay attention, it's quite easy now. Upon launch in September 1997, the two mainstream models in the range were the XJ8 3.2 and XJ8 4.0, and it is these models which will account for the bulk of used cars available. A more luxurious long wheelbase Sovereign model was introduced at the same time and a year later, the short wheelbase Sovereign was added. To satisfy the requirements of those who wanted gut crushing acceleration, the 370bhp XJR8 was made available from September 1997, powered by a supercharged version of the 4.0 litre V8 engine. So far so good. Perhaps feeling that this was slightly too straightforward for our own good, Jaguar also resurrected the Daimler brand, with the 4.0 V8 and 4.0 Super V8 models. These are essentially super luxurious versions of the Jaguar XJ8 4.0 Sovereign and Jaguar XJR8 respectively. Laden with additional chromium and other extras and commanding a £10,000 price differential over their Jaguar brethren, the Daimler models will remain a rare sight on British roads. A special version of the XJR8 was developed in 2000, known as as the XJR-R, but sometimes referred to as the XJ-R SVO edition, with upgraded brakes, suspension and 20 inch wheels. The XJ8 series was replaced in 2003 by the all-aluminium XJ series.

Value for money being relative, a brand new £64,000 Daimler 4.0 Super V8 actually looks very good value when compared with £74,000 worth of Mercedes S500 or £76,000 of BMW 750iL. The same can be said for the entire XJ8 range, right down to the entry level 3.2 litre car, and this relative value is reflected in the used market too. It goes without saying that any car in this class, and the XJ8 in particular, will be well stocked with standard equipment. Whilst it would be vaguely pointless to run through equipment lists, certain notable inclusions stand out. The XJ8 3.2, 4.0 and XJR8 are supplied as standard with cast alloy wheels, rising from 16, 17 to 18 inch diameter respectively. All models are fitted with automatic climate control, veneer fascia and console and automatic headlight levelling and illumination. In brief, whatever model XJ8 is selected, expect a far more luxurious level of trim when compared to its rivals. The Daimler models boast further refinements which render the atmosphere of a mobile Edwardian drawing room. Upon entry, you may feel the need to don a smoking jacket, but the road manners are anything but antiquated. 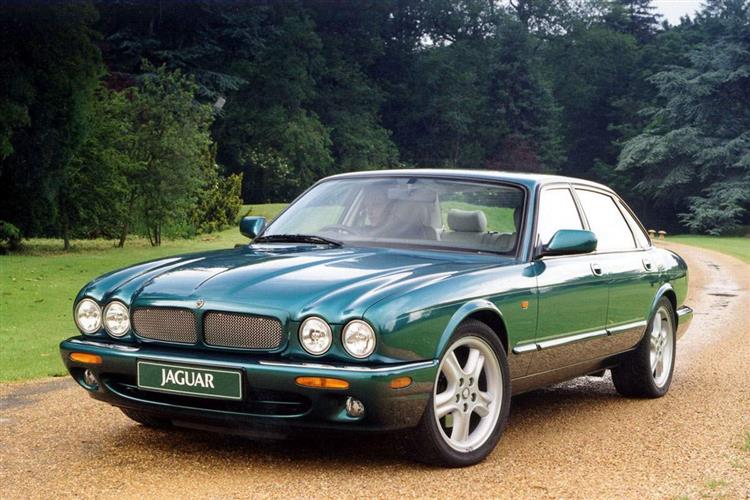