You don't have to have reached directorship level to own a Jaguar. In actual fact, you can buy a good one at prices beginning from Mondeo money. Yes, really. And if you've always yearned after a Jaguar, this could be the best time to buy one. A warranted lowish mileage Sovereign 4.0 for example, could be yours - from a Jaguar dealer - for the cost of an ordinary, mass produced mid-range family saloon.

The square-shaped XJ40, introduced in time for the British Motorshow in 1986, was supposed to be the saviour of Jaguar. It certainly seemed to offer an improvement dynamically (if not visually) over the much loved but generally unreliable old, William Lyons designed, Series III. In the early years however, the new car was plagued with faults and it wasn't until the end of the decade that Jaguar really began to build it right. Originally, XJ40 buyers selected between two six-cylinder engines, a 2.9 or a 3.6-litre. You could specify either as an XJ6 or the plusher Sovereign. A Daimler was offered in 3.6-litre form or, from 1988, in Limousine long wheelbase form with a 4.2-litre engine. In 1989, a smoother 4.0-litre engine replaced the old 3.6. Jaguar took the opportunity to offer a sportier XJR with the new unit. A year later, a new 3.2-litre powerplant arrived to supersede the 2.9. Then, February 1993 saw an all-new 6.0-litre 12-cylinder engine introduced, available as either an XJ12 or a Daimler Double Six. The new-shape XJ6/Sovereign/Daimler range was introduced in 1994 and was an immediate hit, much to the relief of Ford, Jaguar's new owners. The XJ6 came with a new range of heavily revised 3.2 or 4.0-litre engines, the 4.0-litre also coming with a supercharger in the case of the superb XJR - a model tended to target BMW customers. The XJ12 variant continued in new-shape form. The Sovereign was also offered with 3.2 or 4.0-litre power. The Daimler variant came with 4.0-litre 'six' or, in `Daimler Double Six' form, the 6.0-litre V12. Long wheelbase derivatives were offered across the range from 1995. For 1997, an Executive version of the XJ6 was standardised (previously a special edition) and the Sovereign (with new wheels) was offered with long wheelbase as standard (the shorter body was available only to special order). In the spring of 1997, production of the legendary V12 engine ceased, though stocks of the cars remained for some months after that. A subtle facelift of the entire range in late September explained why. A new series of V8 engines were launched, including a supercharged V8 that out-performed the old V12. Jaguar's new sports cars, the V8-powered XK8 coupe and convertible, were unaffected by these changes. The new saloon range was christened 'XJ8' for Jaguar, while Daimler now became either simply 'V8' or 'Super V8', as eight-cylinder engines were standardised across the Jaguar and Daimler model ranges in 3.2, 4.0-litre and supercharged 4.0-litre form.

What You Getword count: 69

A slice of modern British automotive heritage. In their quest for perfection, Jaguar's competitors have attained a standard of Teutonic excellence which leaves you impressed, but rather cold. The Coventry car in contrast, encourages the notion that it will mature into age with you, rather like a fine wine. The retro styling of the latest cars has produced a glorious shape matched by the superb new range of engines. 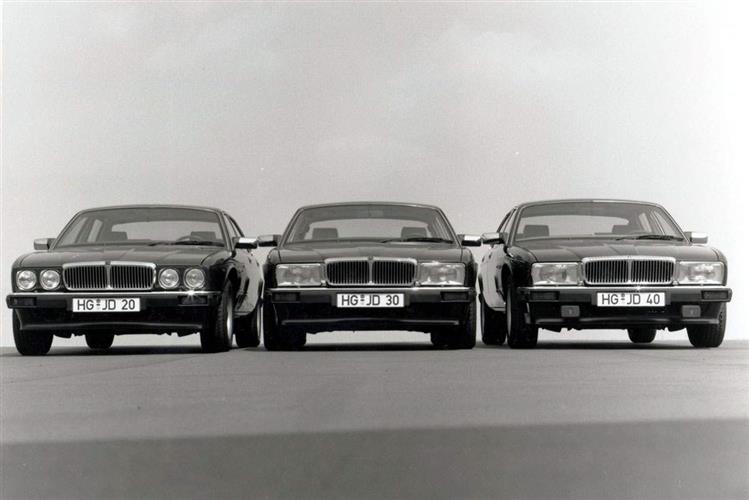