Mention the Fiat Seicento and most people will think of cheeky city cars, the kind of runabouts you see nipping in and out of Turin streets, other drivers chuckling as the spiritual successor to the old Fiat 500 jinks through a tiny gap and into a parking space little bigger than a Quattro Stagioni pizza. The reality is somewhat different, as like its predecessor, the Cinquecento, the Seicento is manufactured in Poland. If the concept of zipping through the streets of Tychy and stopping off for a plate of steamed cabbage doesn't hold the same appeal, the same can't be said of the Seicento. It has taken everything good about the Cinquecento and attempted to ditch its flaws. Seicentos are often bought as second or third cars and often show low mileages, yet their inherent role as city cars means they will often have worked harder to clock up those miles than a larger car equivalent. As a cheaper and cheekier alternative to a Volkswagen Lupo or Ford Ka, the Seicento holds a lot of appeal. 'Forza Fiat' as they say in Poland.

The Seicento was launched in June 1998 to a British market which was gradually becoming accustomed to the modern supermini class, following hot on the heels of the Ford Ka and Seat Arosa. The Cinquecento had been on sale for five years and had managed to carve a niche for itself, and the Seicento aimed to create the bigger car feel that Ford and Seat had so successfully achieved. The range consisted initially of the S and SX models fitted with a 900cc engine and a Sporting model with an 1100cc engine which had proved so popular in its predecessor. In February a Citymatic model was launched, with an automatic clutch for easier town centre driving. Two limited editions were offered; the Mia, launched in March 1999 and the wryly named Suite, available from September 1999. Early in 2001, a revised range was introduced with a minor, yet effective facelift. All models now featured a new 1.1-litre Fire engine and the Citymatic was dropped. Early 2003 saw another slight revision to the Seicento range. The S was replaced by the Mia, the SX by the Active and a new trim level, the Sound was introduced. There were also some minor amendments to trim items such as wheel covers and upholstery. The Seicento was replaced by the new Panda in early 2004.

As can be expected of a car which retailed for as little as £4,990, the Seicento is hardly laden with standard equipment, and the S model lists amongst its standard features black bumpers and a rear wash/wipe, a five speed gearbox and an immobiliser Think basic to avoid disappointment. The interiors are bright and spacious, carrying over the low waistline and airy feel of the Cinquecento. The SX model is fitted with a manual sunroof and attractive wheel trims as well as side rubbing strips and a more powerful heater, but the body coloured bumpers and door mirrors make it appear a classier proposition than the S. The Citymatic offers similar levels of trim to the SX. The Sporting is the most popular model and is fitted with an 1100cc engine, alloy wheels, front fog lights and interior upgrades which include sports seats, a leather steering wheel plus the option of radio/cassette or CD player. A pert rev counter pops out of the dash in a centrally mounted position. Options for the Sporting include air conditioning and an aggressive Abarth sports kit. Metallic paint in either dark or steel grey was an option, but most buyers opted for the signal colours of Starter Red, Black or the eyeball searing Broom Yellow. 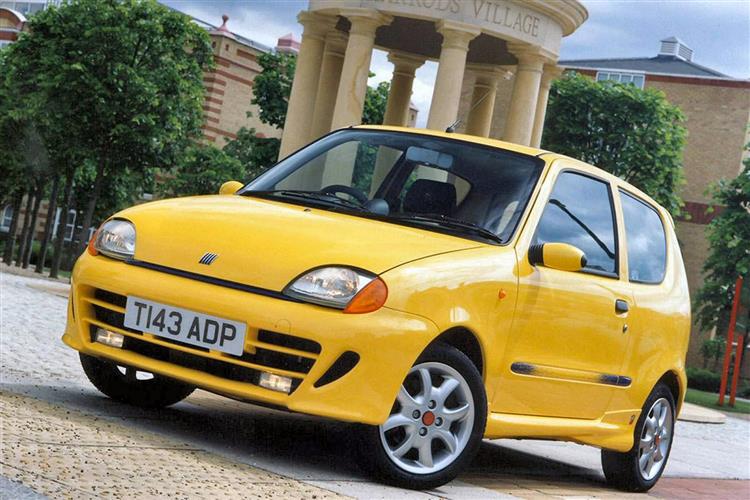