PLUS CA CHANGE (some text hidden)

As if to prove the fact that car buyers don't care a fig about what motoring writers churn out, Peugeot's 206 keeps on selling by the boatload despite getting rather mixed reviews. Launched in 1998 and now feeling rather long in the tooth, its cheeky looks still find favour with the UK public. Halfway through its life, the choice of models was widened with the addition of the 206CC open-top and the model we examine here, the 206 SW compact estate. With so many sold, finding a decent used example shouldn't prove too taxing.

The Peugeot 206 had already been on sale for four years before the SW was launched in May 2002. It wasn't as if sales were flagging in any way as the 206 was at the time, the UK's best selling car amongst private buyers. Rather the driver for the 206SW and its sibling the 307SW was the fact that bar the rather utilitarian Partner Combi, Peugeot had no 'lifestyle' alternatives to the burgeoning crop of mini-MPV and supermini-MPV cars that were starting to sell in serious numbers. Launched with a wide variety of engines and trims, the 206SW thankfully resisted the temptation to cram seven seats into its compact body. A revision wasn't long in coming, the trim structure changing in October 2003. Out went the XL and the XT trim levels to be replaced by Style and S derivatives. A Quiksilver version was also announced to tie in with the skate and surfwear manufacturer of the same name. The SW was also treated to a mild facelift that ran to the tune of a honeycomb grille, the obligatory clear headlight lenses and a bigger chromed Peugeot lion badge on the back. Uniform coloured rear light lenses were also introduced. In early 2004 Peugeot deleted the range-topping 2.0-litre petrol engine from the 206SW line up. The range was reduced to one trim level (Verve) in mid 2005 with only the 1.4 and 1.6 petrol and HDi diesel engines offered.

From the windscreen pillars forwards you won't notice any difference over an ordinary 206 hatchback, the SW retaining the familiar feline face of any conventional 206 but from the door pillar back being completely restyled. With black pillars, side mouldings and roof rails, the SW certainly stands out, the elongated shape giving the car an elegant line. Aping the Alfa 156, the rear door handles are incorporated into the rear door pillars helping to keep the profile clean. The styling at the back is equally adept with light clusters that wrap round the rearmost pair of windows and then stretch right up to roof height. The tailgate sits indented between twin rubbing strips and you'll spot a distinctly unusual curve to the rear window. A neat rooftop spoiler incorporates a central brake light. Designed with practicality in mind, the 206 SW incorporates a number of thoughtful features. The tailgate contains a rear window that can be independently opened and closed - a boon in tight spots. It also comes into its own if you need to transport very long items, being a safer option than driving with the entire tailgate open. This window can be opened from the key fob while the interior of the tailgate itself features a moulded handle so you won't have to get your mitts dirty by grabbing hold of the paintwork. Another trend that Peugeot have chosen to pass on is the creation of estates that carry less than their hatch or saloon progenitors. The 206 SW's load area measures 313 litres to the top of the load cover, which is a useful 76 litres more than the 206 hatch. To make things more convenient still, the loading lip is a full 106mm lower. If you really want to pile 'em high and stack the 206 SW to the roof level, you'll get a massive 480 litres of loading capacity. The load bay is well proportioned too, with minimal ingress from items like suspension turrets. A sturdy load cover, luggage nets and bag hooks ensure that your load arrives safe and sound 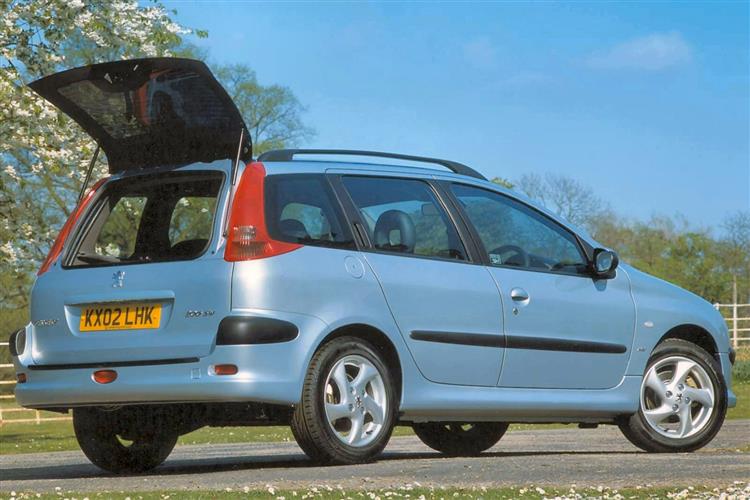