SPOILT FOR CHOICE? (some text hidden)

The Renault Clio has established itself as one of the most stylish small cars around, certainly boasting a bit more high street chic than a Ford Fiesta or a Vauxhall Corsa. Many used buyers are confused by the seemingly impenetrable range of trim levels, but the basic formula is a better built supermini than its predecessor with a focus on interior space. As a used buy it's a fair bet for all but the most enthusiastic driver, who would only really be advised to opt for the range topping Renaultsport Clio 172. Otherwise, an above average performance from Renault.

Renault had a hard act to follow with the Mk 2 Clio. The original car had been warmly received by UK buyers after early suspicion, replacing as it did a near icon, the Renault 5. Truth be told, the 5 was long past its sell by date, but the Clio continued the tradition of lightweight, fun to drive French hatches. The Mk 2 car was a slightly different proposition. The styling took some getting used to, with broad hips and a bulbous posterior. Sure, it felt a good deal more substantial than its immediate predecessor, but had it lost its joie de vivre and its nimble fleet of foot? Whilst it was a more mature vehicle, the Clio was quietly defying all 'small French car' stereotypes. It was refined without being dull, comfortable without being spongy and reliable without being agricultural. The engine choices were straightforward. Petrol 1.2, 1.4 and 1.6 litre 8valve units or a 1.9-litre diesel. Not much there to get the juices flowing, but all proved reliable. It wasn't until March 1999 that Renault saw fit to provide a 110bhp 16v 1.6 and January 2000 before a 98bhp 16v 1.4-litre engine appeared. November 2000 saw the introduction of the 1.9dTi engine, which developed 80bhp and which supplemented the old 65bhp normally aspirated diesel. At the same time the multivalve version of the 1.6-litre engine was introduced for all 1.6 variants, the old 8v engine being deleted. The Renaultsport Clio 172 was introduced in January 2000, fitted with a 172bhp 2.0-litre engine which, until the SEAT Leon VT was launched. Made it the most powerful hot hatch available. Press reaction was suitably gushing, aided by the car's attractive price tag of under £16,000. In October 2000, Renault unleashed the Renaultsport Clio 3.0 V6, a specialist model with a mid-mounted engine, wildly blown-out styling and 230bhp going to the rear wheels. Subtle it wasn't, but despite its outrageous nature, few could see the point in paying an extra £10,000 over the almost as quick Clio 172. In truth, Renault marketed the car as a homologation tool, in order to run a race series. In doing so, they may just have spawned a future classic. Understanding the Clio trim levels is normally the point that people glaze over, and do something a bit easier, like learning Thai or giving Stephen Hawking a few pointers on his Unified Theory of Everything. Until January 2000, it wasn't too difficult, with an ascending level of (relative) luxury/prestige which went RN, RT, RXE, 1.6 Si and 1.6 16v. Perhaps feeling that this wasn't 'lifestyle' enough, Renault then decided upon the 'Clio Collections' - three in all, dubbed Freeway, Elegance and Sport. In the Freeway group was the lead-in Liberte and the slightly better equipped Grande. Both trim levels offer the usual three or five-door choice based around the proven 60bhp 1.2-litre petrol engine, though the Grande also offers a 65bhp normally aspirated diesel. Opt for one of the Elegance models and again, there's a three-way choice, with most of the premium justified by a better range of more hi-tech 1.4 and 1.6-litre 16V petrol engines (plus the 80bhp dTi turbo diesel). Alize, Etoile and plush five door only-only Initiale cars offered a bit more, well, elegance. The Sport 'Collection' kicked off with the helpfully-titled three-door 1.4-litre Sport model, slotting in below the existing Si. The Si meanwhile, also gets the 16v 1.4, as well as the option of that 80bhp 1.9-litre dTi turbodiesel, a unit that returns over 54mpg in normal use yet makes 60 in 12.8s on the way to 109mph. This variant is the only Sport model offered with five doors. Next up is the 110bhp 1.6-litre 16V RSi, previously known as the 'Clio 16V'. If that's not fast enough, you'll need to stretch to the clumsily-named Renaultsport Clio 172 2.0 16V. Shoulld you require the ultimate Clio, opt for the Clio Renaultsport V6, capable on rest to sixty in 6.4s on the way to 147mph. So, aside from offering the possibility of a Renault Clio Sport Sport, the launch of limited editions such as the January 2000's MTV and the dilution of trim levels resulting in the 75bhp Clio 1.2 Sport have made choosing a Clio model a hit and miss affair. 2001 saw a revision of the Clio range. The twin element headlamps attracted most attention, looking similar to those used on the SEAT Arosa, and with built in indicator units they form a huge pod, smearing upwards and outwards. The grille was treated to a completely different look, representing the latest family look as seen on the Vel Satis 2001 Geneva Show car. Two new powerplants were offered, a 1.2-litre 16v petrol and 1.5-litre dCi common-rail diesel unit both make their debut, the diesel being offered in 65 and 80bhp guises, the petrol unit generating a straightforward 75bhp. At the opposite end of the range, the acclaimed Clio Renaultsport 172 underwent some changes aimed at improving low speed flexibility. At launch, the petrol powered range comprised a 60bhp 1.2 8v, the 1.2 16v, a 98bhp 1.4, 110bhp 1.6 and the Renaultsport 172. Diesel buyers got the two 1.5dCi variants, bringing the Clio diesel range well up to date. A luxury Initiale version, reminiscent in spirit of the old leather-lined Monaco variants, also debuted in summer '01. A stripped out version of the Clio Renaultsport 172, designated the 'Cup' was launched in Summer 2002. The Renaultsport Clio was uprated to 255bhp in spring 2003 and gained a number of chassis modifications to make it easier to drive as well as the latest Clio nose.

What You Getword count: 199

If you haven't tried a Clio for some time, you should be favourably impressed by the Mk2 car. Inside, the large glass area gives the cabin a light, airy feel. Outside, the big car theme continues, with a false impression of extra width courtesy of the curvy front wings, large headlamps and that unique upright tailgate with its domed glass. Inside, the interior is better than anything the company's design team has previously produced in a supermini. Basically, it's the same layout as the Megane - though the driving position is much better. There's a useful eye-level display showing radio and clock information and (on top-spec models) novel top-hinged head restraints. Rear seat legroom still isn't great - but then few superminis excel in this department. So the Clio has grown up in the showroom. But is it really more mature out on the road ? Most will think so. A wider front track has enabled the latest car to use a much more sophisticated suspension system, first featured in the larger Megane. The result is a huge improvement in ride, though the springing is still soft enough for it to be obvious that you're in a French car. 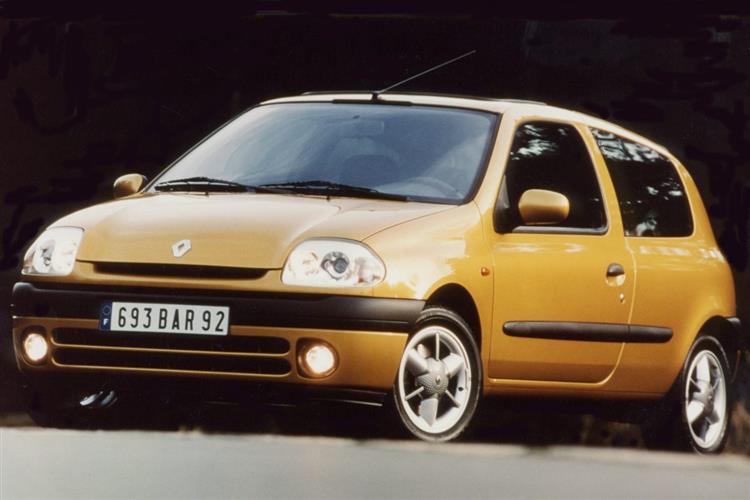