You could well be wondering who exactly buys a Mercedes CL coupe. Admittedly, on paper, the logic does seem flawed. You pay thousands of pounds more for a car with the same power, less doors and a more cramped interior than the S-class model upon which it is based. But you'd be missing the point. CL buyers want the last word in technology from their coupe. Compared to the Mercedes CL, offerings such as the Jaguar XKR and Aston DB7 seem just a little bit prehistoric. The gadget count is truly amazing, but can it really be described as value for money? New, no - used, just possibly. As long as you can live with the guilt of offering somebody around £35,000 for a car which cost well over £100,000 in 1996, you could just land yourself a bargain!

Very much a tale of two models. The first CL model (1996-2000) was a rather inelegant two-door rendition of the S-class saloon, itself viewed as something of a bloated behemoth. Though undeniably large, the early CL was certainly accomplished, and was available in three versions, the 279bhp CL420, the 320bhp CL500 and the leviathan 394bhp V12 CL600. In 1999, Mercedes thoroughly revised the S-class range and a year later introduced CL versions that followed the lighter, slimmer philosophy. Available only in CL500, CL600 and special CL55 AMG edition, this generation of CL gained greater plaudits amongst keen drivers, displaying as they did a level of body control that belied their still considerable bulk. The range was revised in September 2002. The shape stayed the same but there were some minor styling tweaks and trim adjustments. The CL55AMG gained a supercharger and a 500bhp power output whilst the CL600 V12 also boasted 500bhp and enough torque to stop a planet spinning. Then, a little later, the CL65AMG came along with an astonishing 600bhp. An all-new CL debuted in the spring of 2007.

What You Getword count: 462

Perhaps it would be easier to consider what you don't get. The list would be a lot shorter. On the early models, try to stretch to the CL600. After all, if you're going to be silly, you might as well go the whole hog. As you lower yourself in, you'll notice the pneumatic door mechanism pull the door closed over the last few millimetres, likewise the windows drop to prevent an uncomfortable pressure wave when the doors are shut. Turn the key in the slot and electronic arms reach forward to feed you the seatbelt. Getting comfortable isn't difficult due to the 12-way electrically adjustable seats, lumbar supports and multi-adjustable steering wheel. Despite the potential under the bonnet, the engine note is a muted whisper. This sound deadening is aided by double-glazed side windows and an 11-speaker Bose stereo system. This is only the beginning of the CL's array of bells and whistles. The headlining is soft suede, walnut veneers cover parts of the dash, doors and storage compartments, and when no rear passengers are being carried, the rear headrests softly lower to provide a better rear view. For the truly dedicated show-off, however, the boot handle has to take pride of place. Use the remote key fob to pop the boot open and a chromed grip lowers itself into place just above the rear number plate. Touch a dirty car? Not with the CL. Slam the boot and the handle retracts into the bootlid. You'll find yourself opening and closing the boot just for the sake of it. The later shape cars are, if anything, even more impressive. A number of funky innovations have found their way into the CL. The way the doors open is a marvel in itself, with a multi-link door hinge that swings the door open in the conventional manner, then pulls it away from the car and forward, allowing easier access to the rear. As well as Mercedes' fiendishly complex COMAND electronics system which oversees the control of stereo, satellite navigation and telephone controls, the CL also comes with bi-xenon headlamps, a one-touch gearshift, side airbags, window bags and a seat memory. The options are even more fascinating. TELE-AID calls the emergency services if it thinks your CL has crashed, Keyless Go allows you to open your car and start it without recourse to keys, instead having a credit card transponder secreted somewhere about your person. Naturally, British insurers have frowned upon this feature and UK-spec cars do not offer the full functionality. DISTRONIC is a cruise control system that emits a radar beam to keep your CL a requisite distance from the car in front that TELE-AID will not be required. You probably get the point by now. The CL is a crushing technological masterstroke. 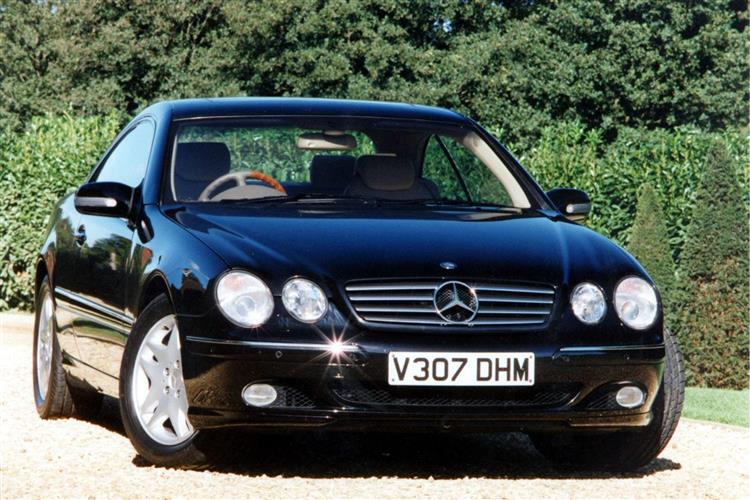