Figure this one out. At the launch of the 9-3 Sport Saloon, a Saab spokesman commented upon how there was no demand for five door cars in this corner of the car market. Shortly thereafter, Vauxhall, a General Motors cousin of Saab, launch their five-door Signum. Based on subsequent sales, you have to conclude Saab had it right. The Signum has been a slow seller for Vauxhall but that doesn't mean it's not worth a punt on the used market - quite the opposite in fact. Used buyers will find a nearly new car with a big saving over new, making the Signum one of the more interesting propositions in its sector. Its predecessor, the Omega, was initially unloved but kept scooping Best Used Buy awards later in life. The Signum is a far better car and its time may well come.

Vauxhall's 2002 model year Vectra re-established the company as a credible manufacturer of mid-range mainstream, offering a credible rivals to the Ford Mondeo and Renault Laguna. Vauxhall had loftier plans for the Vectra chassis however, and a long wheelbase version had been developed with two key aims in mind. One was to enable the Vectra to clean up in the estate market with an enormous capacity load lugger. The other was to offer something genuinely different, a car with plenty of back seat space and a luxurious feel. The Signum was launched on the UK market in May 2003 to a muted welcome from a rather puzzled press. Unsure of quite what the car was and how it fitted into the general scheme of things, reviewer confusion was mirrored by a slow take up by customers. Even now, you don't see too many Signums on the roads. Vauxhall attempted to stimulate interest amongst fleet buyers by offering a three-year free servicing deal during a three month window from August 2003. A 150bhp and 120bhp 1.9CDTi diesel variants were launched in May 2004 in an attempt to boost sluggish sales but failed to make a significant impact and a 1.8-litre entry-level petrol engine was added shortly after. A heavily facelifted Signum was unveiled in mid 2005 sporting a new sportier front end and at this time a 2.8-litre turbocharged V6 engine replaced the 3.2-litre V6 at the top of the petrol range. In the early part of 2006, the 120bhp 1.8-litre petrol engine that propped up the range was replaced by a more advanced 1.8-litre unit packing 140bhp. The newcomer offered better economy and performance at the same price. A little later, the 2.8-litre V6 engine was upgraded to just under 250bhp. The Signum fell from the pricelists at the start of 2008.

What You Getword count: 372

Based on a stretched Vectra chassis, the Signum may claim to offer something new but in certain respects sticks to a well-worn formula. Vauxhall have twigged that cars that offer additional versatility such as the Zafira and the Meriva are the ones that are cornering increasingly big shares of their respective markets. Part of the reason for this is because they have offered a level of utility that many rivals in general, and Ford in particular, have been unable to match. Meanwhile the more mainstream models, whilst maintaining share against the rest, have seen the total market size nibbled away. Therefore it made sense to attempt to offer innovative and versatile cars in as many shapes and forms as possible and the Signum is a new take on this recipe. The well-equipped Signum range tacked between £1,000 and £2,000 onto the prices of broadly equivalent Vectra models, a chunky premium for exactly what? One of the key features that Vauxhall seem very proud of is the Signum's so-called FlexSpace seating concept. This allows the outer rear pair of seats to slide back and forth, allowing a trade off between legroom and luggage capacity. What's more, these seats can also recline to a 30-degree angle. Although it makes a big play of its spaciousness, the Signum works best as a four, rather than five seater. The central berth in the back is rather hard and Vauxhall don't recommend it for anyone over 5'10" tall but it does have its uses. The cushion flips through 180-degrees, revealing cup holders and storage boxes. It can also accommodate the Travel Assistant, another Vauxhall invention that's standard on the range-topping Elite but cost £200 on the Elegance and Design trim levels that constitute the rest of the Signum line up. The Travel Assistant tends to rattle but offers the two rear seat passengers a pair of folding tables, a fridge, a litter tub, cup holders, a 12v power outlet and a holder for a portable DVD player. It's all rather civilised, much like flying window seat in Club class. There are even overhead lockers in which to stow oddments, Vauxhall providing five flock-lined, silicon-damped storage compartments up top for small items such as sunglasses and mobile phones. 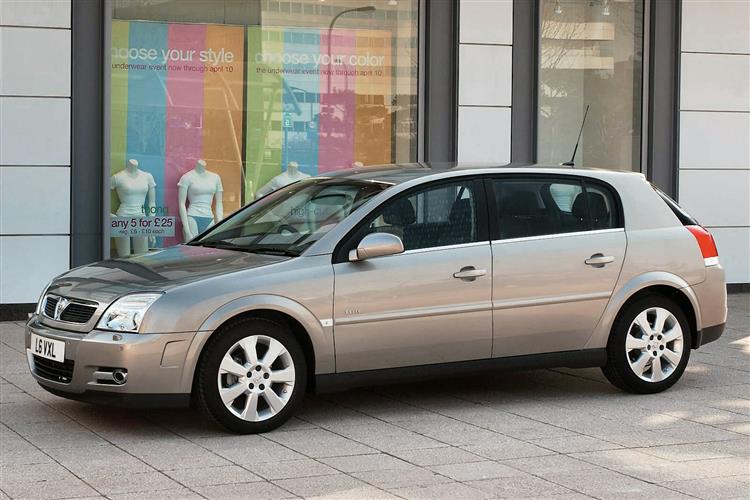