At first glance, the Griffin mounted on the nose of the Vauxhall Monterey looks slightly incongruous mounted as it is aboard a shape best known in the UK as an Isuzu Trooper. Vauxhall's toe in the water of the 4x4 market came about as a result of their ownership of Isuzu, and followed the moderate success of Vauxhall's other Isuzu-sourced 4x4, the Frontera. Whilst the UK sales figures of the Monterey never looked particularly clever, picking up a used example could be a canny move. With lower prices and higher specifications than its Isuzu counterparts, the Monterey range offered conspicuously good value in a rugged, no-nonsense package.

Rewind back to 1994, when the 4x4 explosion was in full detonation. Having made respectable sales in the mid-range 4x4 market with the Frontera, Vauxhall was eyeing the success of the Land Rover Discovery with undisclosed envy. 'Doing a Frontera' with Isuzu's larger model, the two year old second generation Trooper, proved beyond General Motor's temptation and in May an instant full-sized off roader, the Monterey, suddenly appeared on Vauxhall's price lists. Offered with a 3.2-litre petrol engine and a 3.1-litre turbo diesel unit, the Monterey was available in two body styles, a five door LTD version and a three-door RS variant. Pushing the Monterey brand further upmarket was the Diamond trim level, introduced in October 1994 and available solely in the five-door station wagon body style. Sales of the Monterey were modest to say the least, and the range soon started to be pruned back. The 3.2 RS three-door was first for the chop, being deleted in October 1995. In January 1997, the 3.1TD RS was shown the door, shortly after which the rest of the (now exclusively) five-door range received a revised tailgate, twin airbags and seat belt pretensioners. Vauxhall carried on its cull, ruthlessly picking off the stragglers of the Monterey range one by one. The 3.1TD Diamond fell in August 1998, the 3.2 Diamond biting the bullet shortly afterward in October of the same year. The petrol and turbo diesel LTD versions were the last left standing until General Motors kicked the stool from beneath them in January 1999, effectively ending the Monterey and it's Trooper badge engineering exercise.

To say that Isuzu's UK importers were unhappy about their only model being re-badged and sold as a Vauxhall is an understatement akin to Mr Ismay claiming the Titanic "appears to have some superficial flotation issues." Strangely enough, UK buyers, patriotic bunch that we are, ignored Luton's cheaper, better-equipped offering. Trooper sales were barely dented by the Monterey. Unlike the Isuzu and its other main competitor, Land Rover's Discovery, the Monterey isn't available in bargain basement form. Instead, Vauxhall chose to concentrate on the upper end of the market, offering their car with large, torquey engines and lengthy specification lists. Buyers choose between three and five-door bodystyles (dubbed `RS` and `LTD`) and select either V6 24valve 3.0-litre petrol-power or a lusty 3.1-litre turbo diesel unit. When new, pricing for the 5dr LTD turbo diesel was about £800 less than the top Isuzu Trooper (which did admittedly have air conditioning) and over £5,000 less than a Land Rover Discovery ES. All Montereys have speed-sensitive power steering, anti-lock brakes, powered windows, electric sunroofs, central locking, alloy wheels and two-tone paint for the three-door `RS` models. Though hardly the stuff of farmers dreams, it's all essential kit for disillusioned Ford Granada owners. This was of course the target market, even if it was difficult to get anyone at Vauxhall to admit it. Large luxury 4x4s like this offer a great deal attitude than the apologetic mass-market saloon, even if they do carry the twin penalties of poor performance and indifferent fuel consumption. You also get a whole lot of fresh air inside. In the long wheelbase five-door `LTD` Montereys, there's an interior huge enough to rival that of any Renault Espace or Toyota Previa. There are `captains` chairs with adjustable everything up front and behind them, two rows of forward facing rear seats; seven people can ride in comparative comfort. 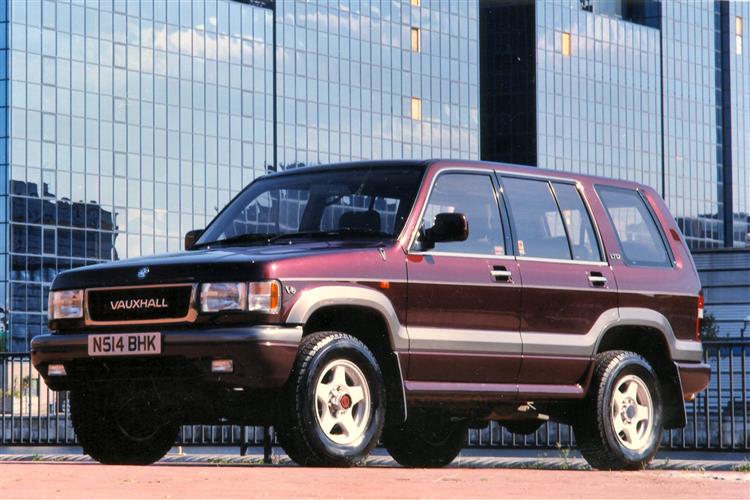