Consistency is a lot more difficult to achieve than you'd imagine when it comes to building class-leading cars. Virtually every car that we think of as a great has had at least one not so acclaimed version. The Volkswagen Golf Mk III, the Porsche 964, and the 'bug-eye' Impreza WRX all spring to mind, overshadowed as they were by both their predecessors and successors. The Mercedes S Class is an exception. The fifth generation car was maybe a maybe but it's tough to call. One thing's for sure. If you're in the market for a nearly new luxury car, it's tough to go wrong with the seventh generation S Class.

The MK6 S-Class could be viewed as nothing but a resounding success, but by 2005, most pundits were pointing out that six years was a long time at the top since this car's introduction in 1999 and that the game had moved on. Never mind the fact that Mercedes cornered 46% of the luxury car market in Europe and 58% in Japan. Even in America, where the prohibitive exchange rates have often meant that a basic S-Class was almost twice the price of a top-end Cadillac, Mercedes still captured a 40% slice of the market. By any conventional measure, that car had been an overwhelming winner. At its launch, it was a technological tour de force and a mid-life revision did much to keep the car at the cutting edge in terms of gadgetry but the basic shape was just beginning to look a little dated in the face of some very avant garde rivals. Mercedes' seventh-generation riposte - dubbed the W221 series - was almost overwhelming. Landing in dealers in April 2006, the W221 S-Class was more aggressive looking, its flared wheel arches making even the base model look like an AMG special. It also heralded improved build quality and better ergonomics for many of the control systems. At a stroke, it made the BMW 7 Series and Jaguar XJ appear hopelessly outmoded.

The styling takes a little getting used to, observers like me having grown accustomed to the sleek coupe-like lines of the MK6 W220 generation S-Class. The MK7 car smoothes the flanks with the absence of side rubbing strips but adds sharply defined wheel arches that some commentators claim are reminiscent of the Mazda RX-8, along with a swage line that runs from the front wheel arch back to the tail light clusters. Bigger in every dimension to its forebear, this S-Class also features a boot lid that's raised. Mercedes claim this mirrors a styling cue from Maybach - their super-luxury vehicle division - but most of the car-buying public will more readily associate it with a BMW 7 Series, which isn't great news when trying to position the S-Class as a trend setter rather than follower. Mercedes' approach in past times with its flagship saloon was to throw a multitude of high-technology features at the design, then wait to see what would stick (a theme continued by BMW's rival 7 Series). More recently with the post-'99 version, Stuttgart dropped the gratuitous gadget count in favour of well-judged refinements - and this continues here. The problematic Sensotronic braking system of the E-Class has been ditched in favour of a refinement of the existing hydraulic set-up, dubbed Adaptive Brake. This system incorporates a number of safety features such as the pads lightly skimming the discs during wet conditions and a hill hold function. The foot-operated parking brake, never a hugely popular Benz staple, has also been quietly ditched in favour of an electronic handbrake. Brake Assist Plus can register vehicles ahead by radar and can calculate if the driver is applying too little braking pressure to avoid a collision, powering up the system to maximum retardation. Pre-Safe is another safety system that recognises potential accident situations, tensioning the front seat belts, inflating air cushions in the multi-contour seat to support the occupant and automatically closing the side windows. 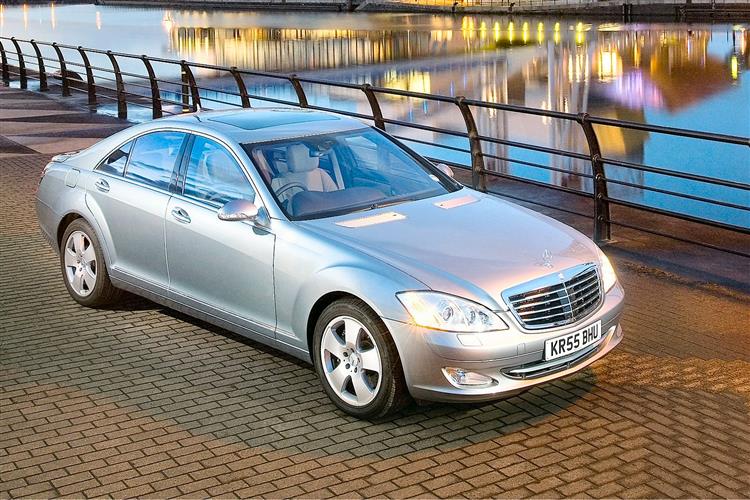