LOST IN THE TRANSLATION (some text hidden)

Industry watchers will long remember the Avantime as the moment Renault, buoyed by a swelling wave of innovation, innovated perhaps a little too far. The idea of merging a Renault Espace chassis with an angular three-door coupe-style body came from way out of left field and left many potential buyers scratching their heads. As a used buy it's an intriguing proposition. Rarity is more or less guaranteed and it may well hold its value reasonably well due to curiosity value but there aren't too many about. Renault aimed to sell 1,500 Avantimes per year in the UK. Divide that by ten and you'd be nearer the mark.

When Renault unveiled the Avantime at the 2000 Geneva Motor Show, few thought it anything but a typical show car. Flashy, impractical but guaranteed to generate a few headlines; it was novel but would never make production. Further inquiries revealed that a deal had already been struck with Lagardere, owners of Matra, to assemble the cars. The Avantime was getting the green light. Green, however, soon turned out to be amber. The initial design for the Avantime hadn't included facility for multiplex wiring, a feature that allowed all sorts of 'plug and play' electronic gizmos to be added or deleted as required. Realising that using a traditional wiring loom would render the futuristic-looking Avantime a touch archaic, a solution was designed that offered a rudimentary multiplex system, but this put Avantime production back another year. This may not have been hugely significant in the Avantime's fate, but its UK on sale date of summer 2002 saw advance orders looking pitiful. Nobody, it seems, was interested in buying a Renault luxury coupe built on an Espace chassis. Worse still, Renault had withdrawn Espace production from Matra's Romarantin factory in central France, leaving it with just the Avantime to rely upon. With global orders totalling 15 cars a day, the plant proved uneconomic and the decision to can the Avantime was taken in February 2003. In a statement it called the Avantime a "commercial failure" and said the decision to end production "drives Matra Automobile to end its activity in auto construction." The Avantime's fate was sealed when Renault themselves washed their hands of the car. "We will not take over production. A transfer of these facilities was considered out of the question because of the cost," a Renault spokesman was quoted as saying. He also stated the Avantime was based on outmoded technology and that it would take too long to restart production in new factories. A bold, if brief, chapter in France's automotive heritage had come to an ignominious end.

What You Getword count: 414

The shape is going to attract and repel equal quantities of customers, being essentially a bevel-hipped three-door MPV with a vertical rear window finished off by a jutting bottom. The detailing is fantastic, with crazily angled figure-eight tail lights, xenon headlamps with gill slats as eyebrows, doors which hinge outwards and then swing open and pillarless side windows which, coupled with the enormous sunroof, lend credence to Renault's assault on the four-seater cabriolet market. Avantime? You bet. Renault describe the car as having a "feline front and a beefier and more propulsive rear", although the vision of a cloven-hoofed barrel-bottomed cat probably sells the Avantime short. Rear seat space is good, as it should be for a vehicle that does away with the Espace's third row of seats, but it's not possible to get your toes under the front seats, which limits ultimate legroom. One switch lowers all the side windows and the sunroof, something owners would be well advised to steer clear of at their local safari park. Despite approaching the Avantime with some cynicism, the execution of the product is so adventurous, so laudable and so beyond the normal frame of reference that one can't help but develop a sneaking admiration for it. One area where the Avantime reverts to convention is in the loading bay, with a 60/40 rear seat giving access to 530 litres below the parcel shelf and a total of 900-litre when loaded to the head lining. There's a wide array of interior trim choices, mostly in muted colours including three different shades of grey, which Renault appear to believe is the 'new black'. The multiplex wiring system allows the easy fitment of ESP stability control, electrochromic mirrors, ABS, brake assist, electronic brakeforce distribution and a whole barrage of airbags, all controlled by a tiny electronic brain. In fact, for a car that purports to be ahead of its time, the electronic innovation of the Avantime looks distinctly modest compared to, say, Mercedes S-class models which have been on sale now for a few years. As touched upon previously, multiplex wiring, a necessity in this class, was never a part of the Avantime's initial design and had to be subsequently incorporated in order to provide the sophisticated functions (such as rain-sensing wipers and sunroof glass) that customers paying this much expect. It's probably the reason why some features, such as the Laguna's trick credit-card key system, aren't included in the Avantime - the development cycles became too tight. 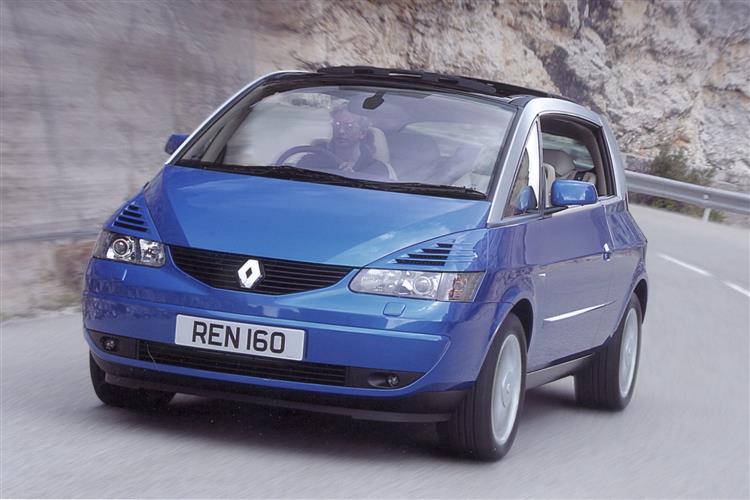