A STILO OF SUBSTANCE (some text hidden)

If we mention how Fiat have massively changed over the years from producing buzzy little contraptions to a company turning out some genuinely well built vehicles, it tends to invoke exasperated calls from the press office. So we won't. Let's just concentrate instead on the very agreeably screwed together Stilo, a car that Fiat can be rightly proud of. Now arriving on the used market in meaningful numbers, this is a vehicle that may not have caught the imagination of the British public but could nevertheless make a very convincing used buy.

The Stilo replaced two model lines when it was introduced in 2001. Despite walking off with the European Car Of The Year award in 1996, the Bravo (and its Brava five-door sibling) never really made the grade in a market that was soon to be blitzed by the Ford Focus and the Vauxhall Astra. The Stilo was a car that took Fiat out of an era of so-so build quality and into a new market where it could compete head to head with premium brands like Volkswagen and Toyota. That was the script anyway. Unfortunately for Fiat, there was a significant lag between the product coming up to snuff and the public's realisation. This means that while the rest of the British car buying public struggle to come to terms with the fact that the Stilo is a class act, you can snap them up on the used market for considerably less than they should - on merit - sell for. In early 2004, the trim levels were realigned and the 5-door model received some small revisions to its rear end. The new Bravo arrived to replace the Stilo in 2007.

Bar perhaps safety, no other area of car design has progressed so far so fast as that of interior fit and finish. Drive a ten-year-old car, even the best built - a Mercedes S-class for instance - and the interior fit and finish will feel cheap next to the Stilo. This is precisely the effect that Fiat were after. The expensively 'slush-moulded' fascia and the attention to detail paid to the colour combinations, the materials chosen in the cabin and the sheer design input distance the Stilo from the best of yesteryear. It also stacks up favourably against the cream of today's crop, and Fiat managed to pull this off without demanding too much additional outlay from the end customer. Like the Brava and Bravo lines that it replaced, the Stilo looks quite different in three and five-door guises. Although the two variants sit on the same floorpan, the engineers have cleverly teased the five-door bodyshell into a shape 50mm higher, 28mm wider and 66mm longer. The airiness of the interior is helped by the option of a full-length sunroof, dubbed the Sky Window by Fiat, which makes the five-door car's interior feel as spacious as current class leaders such as the Peugeot 307 and Honda Civic. What the Stilo five-door pulls off more cleverly than both these rivals is the incorporation of a number of ideas from MPVs such as sliding and reclining rear seats, folding tray tables and a multitude of cubbies, drawers, boxes and cupholders. The three-door model is a different proposition. Lower, more aggressive and to most, more attractive, it shares only bonnet headlamps and grille with its more practical sibling. Drop into the driving seat after driving the five-door and you'll do just that - drop. With a seating position 50mm lower, you hunker down into the car. Drive the cars in the opposite order and you'll feel as if you're perched on a barstool. Should you need more space, the Stilo Multi Wagon delivers it in spades. Of all the conversions from hatchback to estate, the Stilo is probably the most successful. Whether you view this is a tribute to the estate's stylists or an indictment of the five-door hatch it was spawned from is up to you, but the end result is agreeably good looking. What's more, it offers a no-nonsense approach, rejecting the rather mimsy third row of seats offered by some competitors, recognising that whilst it's fine to fit extra seats, being able to get to them would be advantageous. 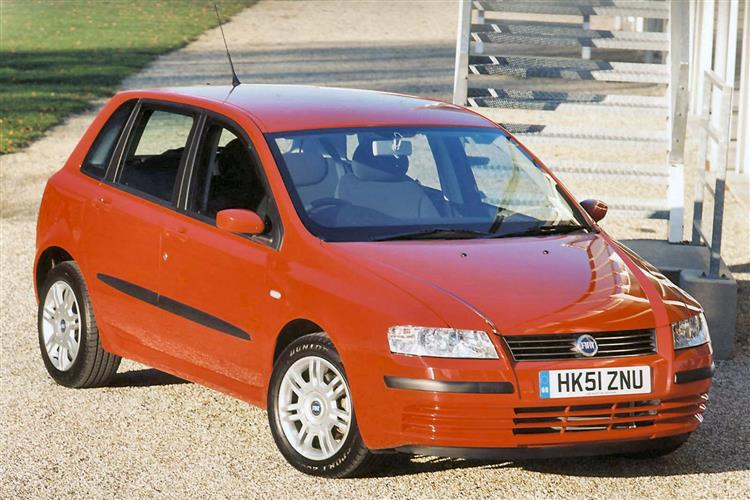