To be truthful, the Sunny name dates from another era. It was originally applied to a family Datsun range back in the late Sixties - one of the products that really gained the Japanese a foothold in Britain. After that of course, we had numerous Sunny spells, but the only two worth worrying about as far as the used buyer is concerned are the final generations, both of which appeared long after Datsuns became Nissans and the company had improved its rather cheap and cheerful image.

The first Sunny in question here is the angular model that appeared in late 1986, a no-nonsense range of hatches, saloons and estates. Dull, dull, dull - but acceptable, efficient family transport. The 1.8-litre hot hatches weren't too bad but the coupes were sheep in wolf(ish) clothing. Much better, was the more rounded range announced in 1991 with multi-valve engines, including one of the finest hot hatches ever made (the twin cam 16-valve Sunny GTi) and one of the wildest hatches to ever hit the road (the rally-bred turbocharged Sunny GTi-R). This was the final Sunny fling, for the car was of course, replaced in 1995 by the Almera, with `the car they don't want you to drive` advertising slogan. In many respects, the 1991-1995 Sunny was no worse a package and still makes plenty of sense as a quality used purchase for the family buyer. In truth, the Sunny disappointed Nissan by never really catching on in the family hatchback Escort market. Post-1991 Sunny buyers selected between a 2.0-litre diesel and three petrol engines. Of these, most chose the 1.4 and 1.6-litre 12-valve units. In the three-door GTi however, a more powerful fuel injected two-litre power plant was used, capable of 0-60mph in 8.2 seconds on the way to a maximum speed of some 135mph. Those that couldn't afford either the GTi's £14,495 price tag or the insurance premiums (group 15) often chose the sporty 1.6-litre SR. Like its more powerful brother, this model was based on the three-door bodyshell but cost around £3,000 less - plus it was rated at group 10.

What You Getword count: 116

There were no fewer than five body styles offered across the two Sunny line-ups, including three and five-door hatchbacks, a four-door saloon, a five-door estate and a rare coupe. Arguably, you could also include the little 100NX sports car, since it was based on the 1.6-litre Sunny's mechanicals and is now priced from £3,000 (92J) to £6,000 (95M). Most Sunnys came well equipped. Take the special edition Nissan launched for the lucrative 1st August 1994 M-reg market, the Sunny Spray. Offered with either three or five doors, it came with an electric sunroof, power steering and a split-folding rear seat. Funnily enough, the trade prices this £200-£300 cheaper than the LX on which it was based. 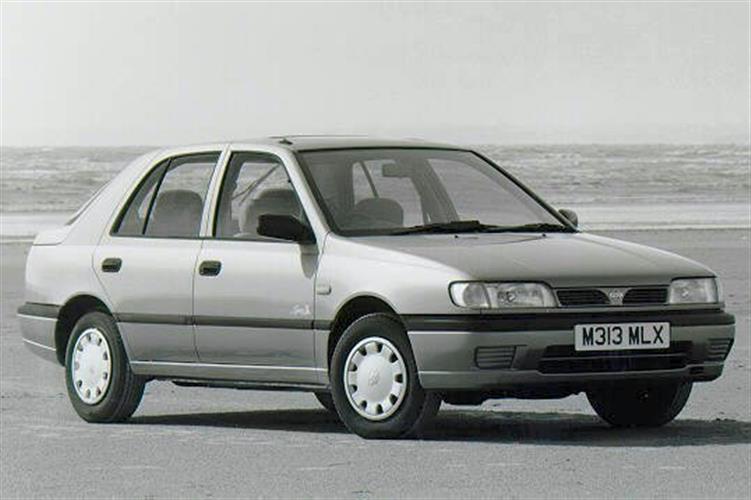