EVOLUTION OF THE SPECIES (some text hidden)

Whilst some airily dismiss the BMW M3 as the ultimate footballer's ride, to most of us it represents an achievable dream - in used form at least. Here is a car that can mix it with a Porsche 911 yet still carry four in comfort, boasts BMWs usual record for reliability and yet retains an almost unassailable cachet. Although the M3 first appeared in left hand drive E30 guise, it's the later right hand drive cars that we examine here. Any M3, on its day, can be huge fun, but the wrong one can saddle you with commensurately hefty bills. Tread carefully to separate the diamonds from the dogs.

The original left hand drive E30 series BMW M3 may have established itself as a drivers car par excellence, but the left hand drive layout and somewhat dated boxy styling denied it widespread appeal. The subsequent E36 series cars were launched in May 1993 and were an instant hit with their sleeker styling and revised engines. The M3 version utilised the 24-valve engine borrowed from the 325i which was subsequently bored to increase cubic capacity and fitted not only with a steel billet crank but also bigger, freer breathing valves. On top of this BMW also grafted on their VANOS variable valve timing system, resulting in a 3.0-litre engine generating some 286bhp.September 1993 saw the fitment of a standard driver's airbag. A super rare M3 GT edition was launched in Racing Green but these are like hen's teeth. A convertible version followed in July 1994 but it wasn't until March 1996 that the M3 range was significantly altered. The M3 Evolution replaced the previous car, bringing with it a host of engine refinements including a 3.2-litre engine originally based on the 328i unit and BMW's evolutionary Double VANOS system that now took care of both inlet and exhaust functions. Effectively half a McLaren 1 engine, this straight six could generate 321bhp, making it capable of that Holy Grail of normally aspirated engines - a power figure in excess of 100bhp per litre capacity. The M3 Evolution was launched in Convertible and four-door saloon guise, the desirable two-door coupe not arriving until May 1996. These models continued largely unchanged until the introduction of the M3 SMG version with Sequential Manual Gearbox was introduced in March 1998, at which point the unloved four-door car was discontinued. A passenger airbag was fitted as standard in July 1999 along with the Edition limited run Convertible model. The E36 series M3 eventually made way for the more aggressive E46 series car in October 2000. This 343bhp monster marked a return to competition bias for the M3. A convertible version followed in March 2001, whilst July 2001 saw the launch of an SMG gearbox for both cars. A fire-breathing lightweight CSL version was introduced in summer 2002 featuring 360bhp and a huge £58,445 sticker price.

What You Getword count: 185

The E36 cars are genuine all-rounders, being as smooth as you want them to be and then capable of genuinely startling acceleration. Even the 286bhp cars are capable of 155mph and 0-60 in a mere 5.6 seconds and the Evolution cars are quicker still. Equipment levels are high, although there are some Coupe models around whose owners didn't opt for leather - one feature that's a must with any M3. All are surprisingly practical, capable of transporting four passengers with ease, although high-speed transit in the back of a hood-down Convertible leaves passengers in danger of being flayed by their own hair! The E46 is a different proposition, prompting many to comment that this was once again a 'true' M3 much as the E30 series was. These same commentators hinted that perhaps BMW's CSi coupe designation was more apt for the urbane E36 series M3 coupe and they may have had a point. The E46 is racer raw but dressed in luxury threads, the SMG version allowing you to play F1 on the entry to corners as the throttle blips the perfect downchange for you. 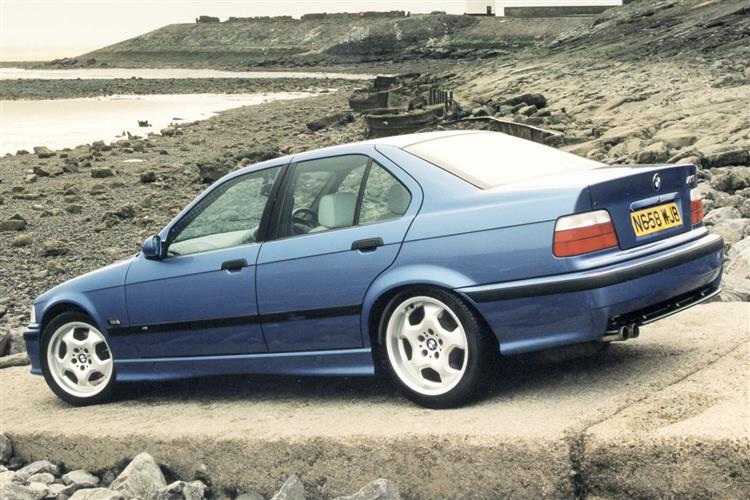